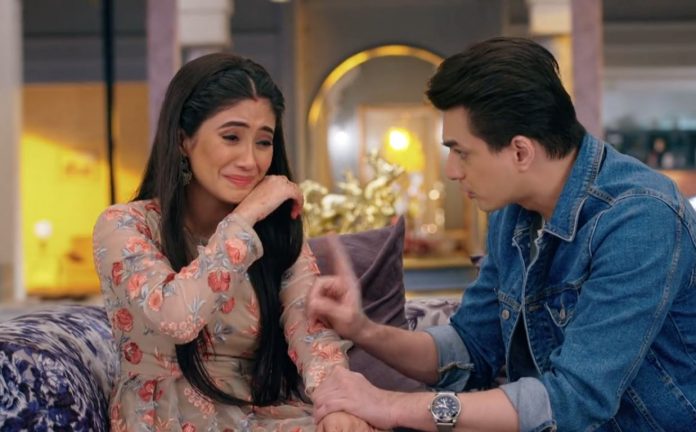 Yeh Rishta 18th November 2020 Written Update Kairav hates Naira Kartik and Naira meet the school principal. They learn that Kairav carried a loaded gun with him to the school. Naira worries that Kartik had influenced Kairav wrongly. Kartik tries to save Kairav. Principal tells them that maybe Kairav found the gun in the school. Kartik asks Kairav why didn’t he tell anyone about it. Kairav lies that he was mistaken of the toy gun. Naira gets to see the senior boys there.

She asks Kairav how did he find the gun in the dust bin, if he had seen someone dumping the gun. She suspects Kairav after seeing the mischievous seniors there. She doesn’t want him to get scared. Dadi is glad that Kairav didn’t make any mistake. Manish doesn’t want anyone to say wrong about sensible Kairav. The family wants to know the matter once Kartik and Naira return home. Kartik stops Naira from scaring Kairav with her questions.

Principal tells them that Kairav is scared by their reactions. He tells that Kairav is the best boy in the school, he always makes them proud. Kairav feels guilty hearing the praise. Kartik and Naira bring Kairav home. They ask Kairav not to take the real gun in hand ever. They ask Krish and Vansh why didn’t they explain Kairav. Samarth blames Vansh for the matter. The elders don’t want Kartik and Naira to tense the kids further. They want the kids to get a relief.

The kids apologize for troubling the family. Kartik asks Kairav to think positive and not worry. He consoles Naira. He asks her not to grow so restless. Naira tells him that she doesn’t want any danger around the kids. Naira knows that Kairav is hiding something from them. Kairav wants to have online schooling so that they get rid of the seniors. Kartik wants Kairav’s fear to end. Kairav and Vansh try to hide the matter from Kartik and Naira.

Kairav acts sick to avoid the school. Naira tells Kairav that she will take him to the doctor. She worries for his health. She gets to see his result. She asks Kairav if he is hiding about the test results. He doesn’t want him to lie. Kartik asks Kairav to stop crying and tell them the truth. She reminds the promise he made. She asks Kairav not to do wrong. She shows the test papers to Dadi. Manish and Dadi laugh on Kairav’s mistake.

Manish praises Kairav for keeping the golden tradition of the family. Kartik learns that all the elders used to perform bad in exams in their childhood. Dadi doesn’t want Kairav to worry. Manish asks Kairav to come up with good excuses. He tells that his excuse is old, he should be creative and make good excuses. He cheers up Kairav. Kairav apologizes to Naira. Manish doesn’t want anyone to make Kairav tensed. Kartik likes the way Manish handles Kairav. He wants Naira not to pester Kairav with her questions. He rebukes her for her strict behavior towards Kairav, which will make him more distant from them. He asks her not to scare Kairav.

She tells him that Kairav is keeping silence, he used to tell everything to them before. She tells that Kairav isn’t understanding her concern. Kartik doesn’t want her to stay upset. She wants him to understand that Kairav will learn to hide the matters from them. He blames her for her odd behavior to suspect her son. He asks her not to give tension to Kairav. He tells that Kairav should believe their love. She apologizes on realizing her mistake.

She tells him that they have to be little strict towards Kairav. Kartik tells that they have to protect and support Kairav. Kairav finds them fighting for his sake. He feels guilty. Kartik doesn’t want Naira to expect so much from Kairav. Kartik makes sure that he cheers up Naira and Kairav as well. He doesn’t want them to have sulking faces. He gets Kairav to play. Naira joins them for the basketball challenge. Kairav refuses to play with Naira. He gets upset that she doesn’t support her. He begins to hate her, which becomes a matter of concern.

Reviewed Rating for this particular episode Yeh Rishta 18th November 2020 Written Update Kairav hates Naira: 2/5
This rating is solely based on the opinion of the writer. You may post your own take on the show in the comment section below.