Anupama Rakhi exposes Vanraj 19th November 2020 Anupama Written Update Anupama is ready for a walk. Vanraj doesn’t miss the chance to taunt Anupama. Bapu ji tells him that Anupama has the combination of a saree and a shoe, Saree signifies values, while a shoe signifies speed. He tells that Anupama carries her values and also matches the pace of life. He answers Vanraj. Vanraj asks Anupama to be careful, else she will fall down.

Samar taunts Vanraj that the person who falls can get up and walk, but the person who falls in the sight can never get up. Bapu ji agrees with him. Anupama tells Vanraj that its good to fall and get up, but its really bad to not get up after falling down. She taunts that he has fallen down and still not getting up in her sight. Anupama tells Baa that she will come back and finish her work. Anupama enjoys the walk. Nandini tells that they will have some yoga.

She asks Anupama to just meditate. Anupama sits to meditate. She recalls Vanraj’s mistakes and is heartbroken. She takes a deep breath. Nandini gives her water. She asks Anupama to not suppress her emotions. She tells that Anupama didn’t get over her pain, inner healing is also necessary. She asks her to become strong within, and not just pretend to be strong.

She motivates Anupama to forget her pain. Anupama wants to become strong. She takes Nandini’s advice. Samar gets coconut water for Anupama. Anupama tells him that they should return home now else Baa will scold her. She returns home. She gets to meet Vanraj. She asks Vanraj to celebrate Kavya’s birthday without hurting anyone. She tells that she has accepted Kavya as family, but Kavya fooled her. Vanraj finds her an unlucky woman. He doesn’t want to see her face.

Vanraj goes to meet Kavya. Rakhi and Kinjal meet the family. Rakhi asks for Vanraj. Baa tells her that Vanraj has gone for an official trip. Rakhi thinks she missed the chance. She tells that she wanted to wish Vanraj on Diwali. She taunts that Vanraj is running two houses, of him and Anupama’s family. Anupama wants to fix Paritosh’s marriage. Rakhi tells that she doesn’t want to rush. She tells that Paritosh and Kinjal have their exams ahead.

Baa tells that they can just fix the date and keep it. Rakhi tells that she has to know them well, since she wants to know about Vanraj and Anupama well. She wants to be sure that Kinjal is marrying in a good house. Baa taunts that she will also find out Rakhi’s character. She tells that its their right as well. Rakhi turns angry.

Anupama tries to calm Baa and Rakhi. She doesn’t want them to argue. Rakhi tells that she just wants to take precautions. She tells them that she is going on a trip with her friend, she will return and talk about the marriage date. Anupama is worried. She wants Rakhi to come back soon and fix the marriage. Rakhi follows Vanraj to the same resort. Vanraj spends time with Kavya. He doesn’t want to switch off the mobile on her saying. He wants to be connected to his parents and children. Rakhi finds Vanraj there. She wants to find an evidence of Vanraj’s affair with Kavya.

She starts gathering the pictures and videos of Vanraj and Kavya’s romance. Anupama wants to promise herself that she will become strong. She feels alienated in Vanraj’s house, but she loves his family. Rakhi gets a video evidence. Kinjal receives the pictures. She goes to alert Anupama. Vanraj and Kavya’s affair will get known to the family as well. What will happen next? Keep reading.

Reviewed Rating for this particular episode Anupama Rakhi exposes Vanraj 19th November Written Update: 3/5This rating is solely based on the opinion of the writer. You may post your own take on the show in the comment section below. 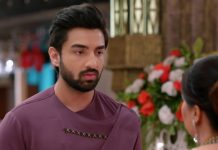 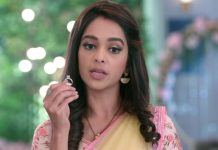 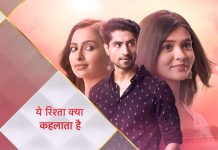