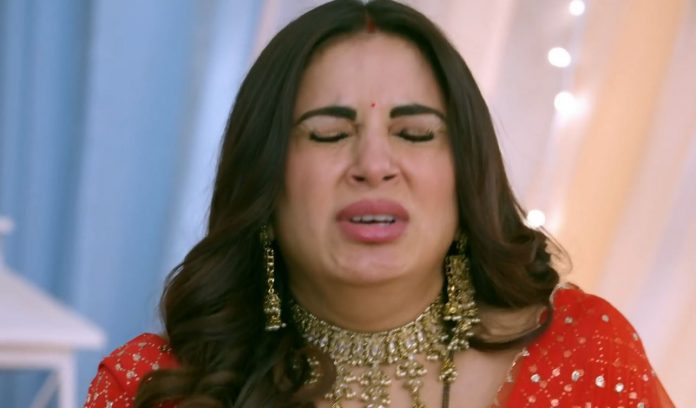 Kundali Bhagya 20th November 2020 Written Update Preeta poisoned Rishabh is troubled by Sherlyn’s pregnancy. Karan tells Sameer and Rishabh that Preeta isn’t fighting with him because she is hungry. He tells that she is keeping the fast and lacks the energy. He tells that its good that Preeta doesn’t eat food and stays dull. But, he realizes that he likes Preeta who fights him, not the sweet and calm Preeta.

He wants to take care of her. Rishabh asks him to be with Preeta on the first Karwachauth. He wants Karan and Preeta’s closeness. He tells that their distance should end. Karan tells Rishabh that he didn’t fight with Preeta so that his name doesn’t spoil. Sameer asks him why isn’t he talking of Mahira. Karan asks them not to tease him. Sameer and Rishabh know that Karan loves Preeta. Sameer tells that he can see Karan’s love.

Rishabh tells that Karan has much attitude, he won’t accept his feelings so soon. Preeta bears the hunger with difficulty. She wants to pass the time soon. Meanwhile, Bani lectures Mahira on hurting their feelings by making a joke of the fast. She tells that the Karwachauth fast has much significance.

Kareena asks Mahira how can she shock them by behaving like a kid, who can’t stay hungry. She also rebukes Mahira. Mahira lies to them that she was just taking care of Sherlyn, who was dizzy. She tells that she was feeding Sherlyn. She tells that she isn’t Preeta to do a drama and get their attention. She reveals that she is feeling hungry and dizzy, but she won’t break the fast, she will keep the fast for Karan’s love. Kareena and Bani apologize to her. Their misunderstanding gets cleared.

Sherlyn realizes that clever Mahira used her to clear her name. She can tolerate Mahira, but not Preeta. She wants to settle scores with Mahira once Preeta is out of the house. Bani wants the arrangements to be done for Karwachauth. Bani asks Rishabh why doesn’t he look happy for his wife’s pregnancy. She asks him to not run away from the child’s responsibility. She tells that he is much responsible already.

Kareena tells that Rishabh is also tensed about the good news, just like Mahesh was tensed on hearing about Rakhi’s good news. Karan tells them that Rakhi is going to keep the Karwachauth fast for Mahesh. He tells that he fought with her, but she still wants to keep the fast. Bani tells that Rakhi would want Mahesh to recover. She gets emotional. She wants Rakhi’s belief to win.

Karan and Rishabh go to see Rakhi. Kareena doesn’t want Bani to pamper Preeta so much like Rakhi does. Bani tells that Preeta has respected them, she is handling all the work herself, they should support and give love to Preeta. She tells that Preeta is unwell and she is just being sensitive towards her. Kareena tells that she is just acting like Rakhi. Mahira poses a challenge to Preeta. She wants to be called Karan’s wife. Preeta is upset that Kareena introduced Mahira as Karan’s wife. Preeta feels unwell.

She hides her pain from the family. Mahira tells Preeta that she isn’t well, but she is still hiding the pain from everyone. She is happy to be with Karan. Preeta isn’t like Mahira to use her pain to get their attention. Mahira wants the title of Karan’s wife. She wants to write pain in Preeta’s Kundali and Bhagya. She argues with Preeta to upset her further. Preeta lectures her on the fate. Mahira doesn’t think Rakhi has oust her this time. She tells that she will get Preeta thrown out. She tells that she can go to any extent to get her rights, she can even kill anyone.

She wants to break Preeta’s courage and frustrate her. She tells that she was thinking that Preeta will have a long lecture, but maybe next time. She asks Preeta to take her warning. She doesn’t want Preeta to misbehave with her. She rebukes Preeta. She wants to shut the door on Preeta’s face and ousting her forever. Preeta doesn’t get scared of her warning. Mahira and Ramona poison Preeta’s food to kill her. Preeta faints down before breaking the fast. The family attends her and calls a doctor. The doctor reveals that Preeta had been given poison by someone. This shocks the entire family. Karan and Rishabh suspect Mahira. Sherlyn realizes that Ramona is really dangerous. She wants to be alert of Ramona. Will Mahira’s evil get known to the Luthra family? Keep reading.

Reviewed Rating for this particular episode Kundali Bhagya 20th November 2020 Written Update Preeta poisoned: 5/5This rating is solely based on the opinion of the writer. You may post your own take on the show in the comment section below.