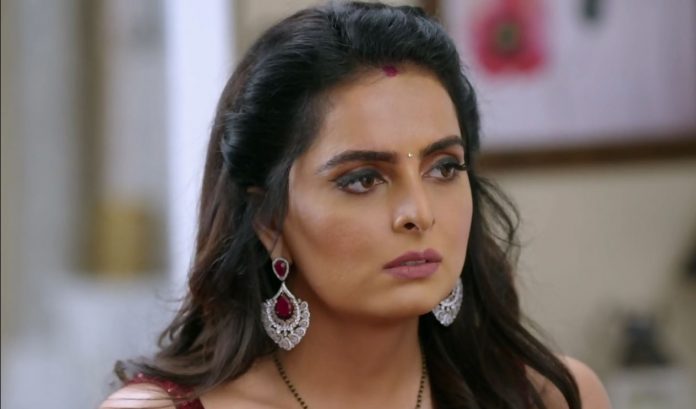 Kundali Bhagya 23rd November 2020 Written Update Sherlyn’s shocker Preeta sticks to her decision that she will not eat anything and break Karwachauth fast. Karan respects her decision, but worries for her health. Mahira wants to feed the food to her forcibly, so that Preeta’s fast breaks. She tells that the family also wants her to break the fast. Karan doesn’t believe in such rituals. He doesn’t want Preeta to fall ill. He loves Preeta, but doesn’t realize his feelings. He thinks she doesn’t listen to him ever, she just wants to trouble him, and then she is keeping the fast for his sake.

He likes Preeta who fights with him. He finds Girish crying and praying for Preeta. Girish tells him that he has asked his mum to pray for Preeta, since she is sick. Karan finds him emotional. Girish values Preeta as she is a nice person. Karan tells him that Preeta would get okay soon. Preeta knows that Mahira has evil motives. She challenges Mahira to break her fast and show her. She tells that she has kept the fast with utmost devotion.

She wants Mahira to get lost. Mahira tells that its not any game for her, she has to prove herself as Karan’s wife. She tells that she will take a big step against her. She goes to tell Sherlyn that Karan has lost his cool since Preeta is adamant to keep the fast. Mahira speaks to Ramona to know the next plan. She tells that Preeta’s fast will break any moment. Ramona tells that the climax is still left. She wants to frame Sarla in the poisoning case. She tells her plan to Sherlyn. She tells that Sherlyn can take revenge on Preeta.

Sherlyn is ready to go to any extent to take her revenge. She learns Ramona’s plan. Rishabh tells the family about the food poisoning affecting Preeta. Doctor tells them that someone has added the poison in Preeta’s food intentionally to harm her. Sherlyn doesn’t want anyone to doubt her. She acts to be affected by the poison as well. The family gets worried for her. Doctor checks her. Shrishti wants Sarla and Janki to get ready soon. She is decked up to go to Luthra house. Sameer informs her that Preeta is unwell, she had fainted during the rituals. He asks Shrishti not to tell anything to Sarla.

Shrishti is confused if she should meet Preeta or not. She worries for Preeta. Doctor tells the family that Sherlyn also has the same poison as Preeta, she had also eaten the same poisoned food. She treats Sherlyn as well. She gives the anti-poisoning injection to Sherlyn. Mahira informs them that the neighbor’s cat died in their kitchen. Rishabh and Karan check the dead cat. Sherlyn acts along with Mahira. Rishabh is worried since Sherlyn is pregnant, her baby can be in risk. Mahira acts scared and gets Bani’s sympathy.

Sarla looks for Shrishti. She calls Shrishti to know if she has gone alone to meet Preeta. Shrishti wants to meet Preeta and know the matter. She apologizes and lies to Sarla. Sarla asks Shrishti why didn’t she tell about Luthras celebrating Karwachauth event at the club house. Sarla tells Janki that Shrishti will inform them to come to Luthra house after some hours. Rishabh and Karan find the cat’s death a strange incident. Kareena tells that the cat had eaten the laddoos sent by Sarla. Mahira tells that Sarla got the poisoned food.

Rishabh and Karan don’t believe her. They find her lying. Mahira tells her that she had mixed the laddoo in the milk and gave it to the cat. Sherlyn accuses Sarla for poisoning the laddoos to kill her baby, out of jealousy. Kareena asks the doctor to send the sweets to the lab for testing. Doctor tells them that Preeta and Sherlyn will be fine.

Rishabh tells that Sherlyn was fine, she can’t fall ill suddenly. Sherlyn tells that she had eaten the laddoos some time back and felt sick. She cries out to Rishabh that Sarla is jealous of their baby. Rishabh doesn’t think so. Karan also supports Sarla. He tells Sherlyn that he doesn’t believe that she is pregnant. Sherlyn takes the police to Sarla’s house to get her arrested.

Reviewed Rating for this particular episode Kundali Bhagya 23rd November 2020 Written Update Sherlyn’s shocker: 2/5 This rating is solely based on the opinion of the writer. You may post your own take on the show in the comment section below.