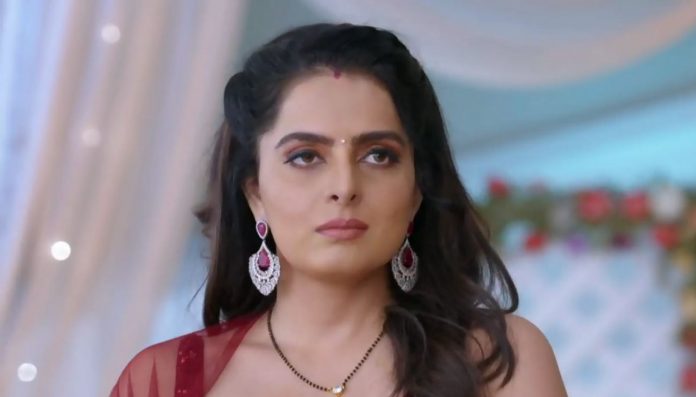 Kundali Bhagya 25th November 2020 Written Update Sherlyn confronted Sherlyn repeatedly lies to the police that Sarla tried to harm her baby in womb. She tells Sarla that her baby is fine despite her step to poison her. Sarla tells inspector that she didn’t poison Sherlyn to harm her baby. She tells that Sherlyn is trying to hurt her daughter Preeta. Sherlyn tells that Preeta got the police to Luthra house and ruined her plans, but now she will come running to save her. She wants the police to throw out Preeta from the house. She ruins Preeta’s first Karwachauth. She takes revenge on Preeta.

She tells that she will win when Preeta leaves the fast incomplete. Janki begs to the inspector to get Sarla freed. Sherlyn asks inspector to punish Sarla. She does a drama and sends away Sarla. She tells Janki that she will get happiness now after seeing Preeta in tears. Janki gets angered. Mahira acts in front of Bani and Kareena. She lies to them and gives them tension about Sherlyn. Sherlyn returns home and tells them that she had gone for an important work.

Kareena questions her further. Sherlyn acts dizzy and sends away Kareena. Mahira asks Sherlyn how did the plan go. Sherlyn tells that she is really happy that Sarla got arrested. She wants to inform Preeta that her mum reached jail. She tells that Preeta will go mad in sorrow. Mahira tells that she has brainwashed Bani and Kareena against Sarla. They both want to see Preeta losing Karan. Mahira wants Karan with her.

They want to teach a lesson to Sarla by making Preeta’s life hell. Karan wants Preeta to break the fast. Preeta is selfless and wants to care for Karan. Sameer praises Preeta for her devotion towards the fast. He wants Karan to know that Preeta is doing everything for his long life. Karan takes care of Preeta. Sameer and Shrishti feel happy seeing them. They can see Karan and Preeta’s true and strong love. Shrishti tells that Karwa Maa has blessed Preeta and made her relation strong with Karan.

She tells that she has realized that love is the best comfort, she loves Akhil, but he is accused for shooting her dad. Preeta and Karan learn her take on the matter. Rashmi tells that Akhil had own reasons, but his proof isn’t proved till now. Sarla is put in the lockup. She gets reprimanded by the police staff. She bears the humiliation. She feels Sherlyn is really evil. Janki barges into the Luthra house.

She yells to meet Sherlyn. Sherlyn and Mahira are excited to see the drama. Rakhi wants to know the matter. She comes to meet Janki. Bani and Kareena also Janki about the matter. Janki tells them that they are rich people, but have no heart. She tells them that Sherlyn has ruined their lives by her constant conspiracy. Shrishti and Preeta ask Janki what’s the matter. Janki reveals that Sarla got arrested because of Sherlyn’s FIR. Luthra family is shocked. Rishabh confronts Sherlyn for her move. Preeta wants justice for Sarla. She opposes Sherlyn. She wants to reveal all their crimes to the family. Will Preeta expose Sherlyn and Mahira’s conspiracy? Keep reading.

Reviewed Rating for this particular episode Kundali Bhagya 25th November 2020 Written Update Sherlyn confronted: 5/5 This rating is solely based on the opinion of the writer. You may post your own take on the show in the comment section below.