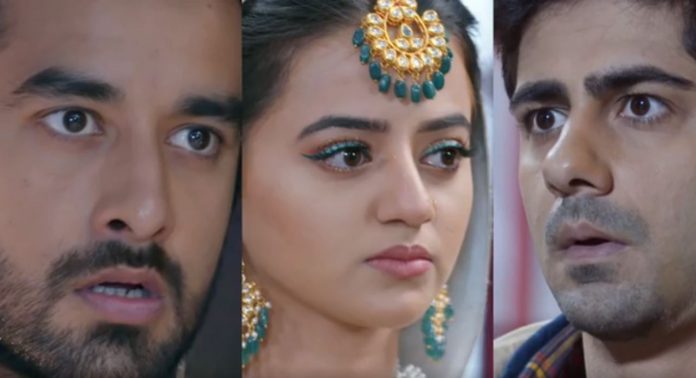 Ishq Mein Marjawan 26th November 2020 Written Update Full Vihaan caught Riddhima takes Dadi’s blessings to get Vihaan home. She wants to tell the truth to Dadi once she defeats Kabir. She knows that the family will dislike her move, but she is helpless to get Vihaan. She wants to convince the family some how. She meets Vihaan before his allotted time. She tells him that she got the money, but she couldn’t arrange 50 lakhs. She asks him to just accept the money and the deal for the sake of humanity. She reveals that it was tough for her to arrange the money. She explains the need for him to become Vansh. He tells her that he can’t go with her until the payment is complete. He compels her to complete the amount of 50 lakhs.

She gets helpless to give him Vansh’s watch instead the money. He likes the watch and accepts it. He seals the deal. She asks him to start preparing to be Vansh. She tells that their deal is finalized, they should sign the contract so that he doesn’t back out easily. He agrees to sign the papers. He tells that they should better trust each other since they are going to become husband and wife for the world. He keeps his conditions.

Kabir follows Riddhima to Vihaan’s place. He tries to find out the truth. He doesn’t want to spare Riddhima. Riddhima suspects Kabir’s presence. She meets him and tries to stop him. Kabir wants to know who is empowering her to fight. He asks her to reveal her partner. Kabir doesn’t see Vihaan in the house. Vihaan easily tricks Kabir by putting up a cunning drama. She had warned Vihaan about Kabir. He manages to fool Kabir.

He tells that Riddhima is just helping him. Riddhima tells Kabir that the old man was the manager in the orphanage, she came to invite him for the marriage, but he is refusing to come. She tells that the old man is like her father. Kabir gets convinced. He doesn’t trust Riddhima easily seeing the house interiors in Vihaan’s house. He questions Vihaan about the house. Vihaan tells Kabir that he has always answered his guests who question the same. He tells that the house is decorated by his grandson who visits him often.

Kabir wants Riddhima to come home soon for the marriage. Vihaan asks Riddhima to compliment his acting. Riddhima tells him that he can’t ask her to do anything wrong. He tells that his act was convincing. He tells that she is going to become his wife. She tells that it will be a fake relation. He signs the contract. He confronts her about promising Kabir of marriage. He asks why is she taking him home as her husband. He wants to know if she had cheated Vansh as well. He finds her nuptial chain. He suspects that she is dual faced.

Riddhima stops him from crossing limits and commenting on Vansh’s relation with her. She tells that she won’t keep any contract if he misbehaves with her. He tells her that he has also made a contract for her. She gets to read his terms and conditions for the drama. He demands much money. She finds him really crazy. They get into a moment. She explains him once again that he needs to remember his limits. He tells her that she has to say sorry to him if anyone in the family upsets him. He tells that Kabir is a cop, she has to save him from Kabir also.

He tells that he will change his rate card with time. She asks him not to charge too much that she can’t pay him off. Vihaan has already demanded 5 crores from her. He asks her to decide if she wants to take him home or not. She accepts his conditions. Anupriya speaks to the jeweller. She learns that Riddhima has sold her jewellery. Riddhima finds Vihaan blackmailing her for money. Anupriya informs Kabir that Riddhima had sold her jewellery and took the money for some purpose. Kabir suspects Riddhima further. He knows that she is playing a big game.

He thinks to find out what is she up to. Riddhima convinces Vihaan to do the work for which he is hired. They both sign the contract and become partners. She doesn’t trust Vihaan. She asks him to enter VR mansion on the right time. She expects him to not disappoint her. She calls him up and summons him to reach on time before the marriage ceremonies begin. Kabir reaches Vihaan’s place once again to check on him. He wants to uncover the truth. Vihaan assures her that he will be there on time to stop her marriage. Will he get caught? Will Kabir find out Vihaan? Keep reading.

Reviewed Rating for this particular episode Ishq Mein Marjawan 26th November 2020 Written Update Full Vihaan caught: 5/5 This rating is solely based on the opinion of the writer. You may post your own take on the show in the comment section below.