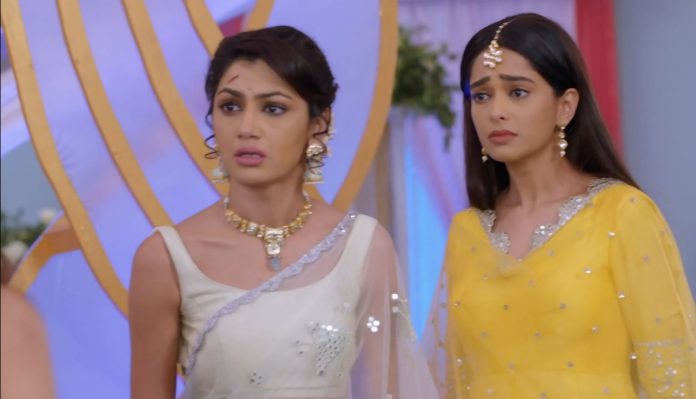 Kumkum Bhagya 27th November 2020 Written Update Rhea hates Prachi Pragya recalls the promise she had made to Abhi that she will always keep the family united. He takes her promise that she will always be together and never get away from their children. Pragya recalls his promise that they will behave like elders and never fight so that their daughters stay happy. Prachi wants to know why did Pragya get separated from Abhi. Pragya tells that she will answer everything to her. She wants Prachi to stay happy with the family. Ranbir wants to show his obstinacy. He wants to decide with whom he wants to live his life. He gets unstoppable.

He wants Pallavi to open the door. Vikram tells Pallavi that Ranbir can get away from them. Dida asks Pallavi to explain Ranbir with love. Ranbir rebels against his family. Vikram tells Pallavi that they can’t keep Ranbir caged. Pragya gets Prachi to the police station to give statement in Rhea’s favor. Inspector tells her that its too late now. Pragya tells that Rhea is innocent, she didn’t do anything. Inspector reveals that Rhea already got bailed. Pragya gets happy. She thanks the Inspector.

He tells that Abhi had come with his lawyer and got the bail papers. Pragya tells Prachi that they will go and meet Rhea. She asks Prachi to go home if she wants. Prachi wants to meet Abhi and Rhea. Aryan meets Ranbir. He tells that he will help him out. Ranbir tells him that his family isn’t ready to accept Prachi, he wants to leave the family for Prachi’s sake. He tells that he has made a plan to escape and unite with Prachi, he can manage his life on his own when the family isn’t considering his happiness.

He doesn’t want to talk to anyone about it. He wants Aryan to support him. Aryan asks him to find a solution and not hurt the family. He tells that its not good to leave the family. Ranbir breaks the door. He tells that no walls or doors can stop him. Pallavi plans Ranbir and Rhea’s engagement. She tells that Ranbir will not go against her. Aryan meets them to reveal her that Ranbir has broken the door, and he is planning to escape.

He tells that Ranbir loves Prachi a lot, he wants to go to her forever, by leaving his family behind. He asks her to stop Ranbir by accepting Prachi. Pallavi gets more against Prachi that she is making Ranbir leave the house. She doesn’t want to accept Prachi. Meanwhile, Aaliya asks Mitali not to let Pragya enter the house. She wants to talk to Abhi and convince him. Mitali doesn’t want Pragya to come home. Pragya tells that Rhea had accepted her with love.

She hopes that Rhea will be happy to meet Prachi. Prachi wants to know about Abhi’s reaction on knowing their relation. Pragya asks her to meet Abhi herself. Mitali wants to oust Pragya. She insults Pragya and asks her to leave. Pragya doesn’t listen to her. She wants to meet Rhea. Mitali takes revenge on her. Pragya reprimands her for coming between Rhea and her. Mitali calls Rhea. Pragya tells Rhea that she got Prachi.

She tells that Prachi wanted to give the statement, but Rhea got the bail before that. Rhea doesn’t believe Pragya. She vents out anger again. Aaliya tries to brainwash Abhi. Abhi asks her not to hate Pragya. He tells that he knows Pragya is true. He gets enough of her hatred for Pragya. She tells that Pragya didn’t change till now. She tells that he couldn’t fill Pragya’s place in Rhea’s life. Meera is shocked to overhear Rhea and Pragya’s conversation. She learns that Pragya is Abhi’s wife. Aaliya tells Abhi that Pragya had sent Rhea to the jail. Abhi asks her to stop speaking ill about Pragya. He wants her to just leave.

Prachi tells Rhea that Pragya has slapped her because of Rhea. Rhea doesn’t want to see their drama. She expresses her hatred that they both stayed away from her life for twenty years. Prachi and Rhea have an emotional confrontation. Rhea doesn’t listen to Prachi at all and wants her to go away. Pragya worries that Rhea isn’t believing her. Rhea accuses Pragya for just giving pain. She tells Pragya that she hates them. She ends their relations. Aaliya gets glad when Rhea ousts Pragya and Prachi from the house.

Reviewed Rating for this particular episode Kumkum Bhagya 27th November 2020 Written Update Rhea hates Prachi: 2/5 This rating is solely based on the opinion of the writer. You may post your own take on the show in the comment section below.