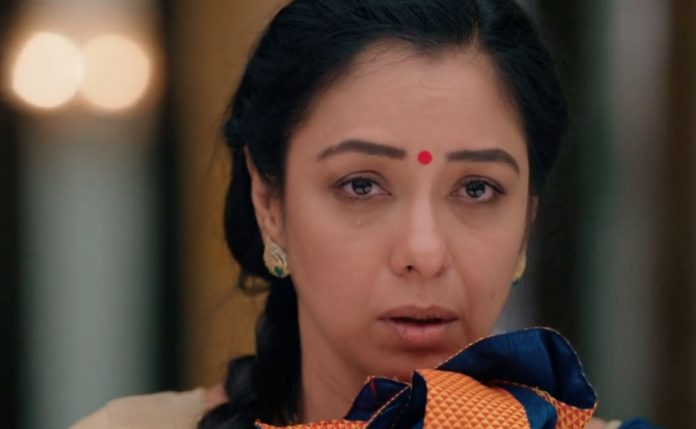 He feels that his relation is suffocating. He blames Anupama for being the reason for his life’s sorrow. Samar asks Vanraj to stop blaming Anupama. Vanraj tells Anupama that he had an affair with Kavya and fell in his family’s sight because of her. He tells that she is the person who ruined his life. Hasmukh stops Vanraj from hurting Anupama. He reprimands Vanraj for being at fault and blaming Anupama. He tells that he regrets to have a son like Vanraj. He gets furious. He falls short of breath. The entire family cares for Hasmukh.

Anupama gives the medicines to Hasmukh. She tries to calm him down. Hasmukh gets stable. He is much disappointed that Vanraj isn’t apologizing and instead blaming Anupama for his affair. Anupama wants Leela and Hasmukh to end the matter. Hasmukh doesn’t want to see Vanraj’s face. Sanjay asks Vanraj to just go away if he cares for Hasmukh. Vanraj hates Anupama for snatching his family. Anupama just wants her family happy.

Hasmukh wants her to stay well. Vanraj informs Kavya that Anupama had made the entire]\family against him. He regrets that Leela had slapped him because of Anupama. He tells that Hasmukh is ending their relations. He tells that he can’t relax when his children and parents hate him. Kavya tries to console him. Vanraj fears that Paritosh isn’t supporting him. He feels he can never meet his children’s eyes now. Kavya promises to support him. Anupama regrets for the family tension. She finds her children scared for the future.

Pakhi asks Samar if Vanraj will divorce Anupama, if the children will get divided. Anupama doesn’t want to forgive Vanraj for dividing the family. Samar tells that Vanraj is really a cheap man. Anupama tells them that they have to mentally prepared for any situation. She doesn’t want her children to cry. She tells that she will not tolerate if Vanraj hurts the family. She knows that her marriage is over, but the relation with children can never end.

She tells them that Vanraj can give his life for the children, he loves them a lot, he wants to leave his wife, but not his children. She asks them not to see Vanraj’s mistake in his marriage, but see his love and good deeds towards the family. She doesn’t want her children to hate Vanraj. Hasmukh and Leela are much disappointed that Vanraj is making them cry. Anupama wants the children to be true like her. She tells that she will always be with her children, even if Vanraj divorces her. Anupama takes care of the children.

Vanraj wants to apologize to his parents. He also regrets to see them crying. Dolly meets Anupama and apologizes to her on Vanraj’s behalf. She wants Anupama not to get divorced. She tells that Anupama and Vanraj’s divorce will break the entire family. Anupama is speechless. Hasmukh decides to kick out Vanraj from the house.

Reviewed Rating for this particular episode Anupama 27th November 2020 Written Update Vanraj rebukes Anupama: 3/5 This rating is solely based on the opinion of the writer. You may post your own take on the show in the comment section below.