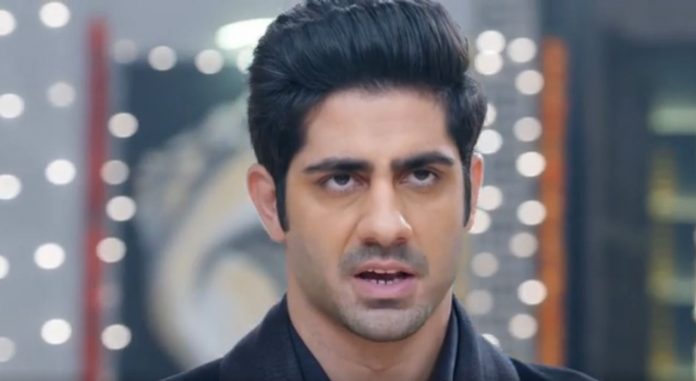 Ishq Mein Marjawan 28th November 2020 Written Update Vansh returns Riddhima is afraid when Kabir reveals that the one she is waiting for will not come back. Riddhima wonders why did Kabir say such a thing, as if he got to know her plans completely. He tells her that no one will come to save her from the marriage. Riddhima tells him that this can’t happen. She sheds tears and decides to find out where is Vihaan, if Vihaan is caught by Kabir. She reaches Vihaan’s place and learns that he isn’t anywhere.

She wants to know where is Vihaan. She thinks Vihaan can’t run away by taking the money, but he is in deep trouble. She loses hope that she will get help from Vihaan. She thinks if Vihaan doesn’t come as Vansh to stop the marriage, then she will be forced to marry Kabir. She gets hell bent to not marry Kabir. She decides to consume the poison and die, to avoid the marriage. Vihaan doesn’t disappoint her.

Riddhima prepares to die and takes the poison bottle in her hand. She wants to drink the poison and end the chapter at once, so that Kabir doesn’t succeed in his evil plans against the family. She doesn’t want Kabir to take Vansh’s place in her life. She threatens Kabir. Kabir compels her to take the wedding rounds with her. Vihaan comes there as Vansh Rai Singhania and declares that the marriage can’t happen. Vihaan tells that Vansh is back in his kingdom to rule once again.

Kabir tells Riddhima that he can’t permit her to leave. Anupriya tells that its a hell for her, she can’t even step out. Riddhima worries that she can’t go out to see Vihaan. She wants to find some way to stop the marriage. Kabir wants her not to shed tears before marriage, since she will be just crying after marriage. He hurts her in anger. He tells her that Vansh was a bad chapter in their beautiful love story, He tells that he is her first love and he is back to her, now her dream of a beautiful life will get fulfilled, Vansh’s chapter is over. Riddhima regrets that she loved him and trusted him blindly.

He tells that no miracle will happen, since he will not let anyone win this time. He warns her that she is under his control. He wants to end her wait, since no one is going to come. He tells that she will have to come to the mandap in some time. Riddhima panics that Kabir got to know about Vihaan. She can’t let Kabir win. She wants to protect Vansh and his family. Kabir tells his mom that the game is set for them, there is no hurdle in the marriage. Anupriya pities Riddhima. He asks her to keep an eye on Riddhima and not let her act smart.

It gets disclosed as part of Riddhima’s dream that Kabir has met Vihaan and got to know Riddhima’s plans. He shoots down Vihaan. This thought breaks Riddhima’s heart. Riddhima doesn’t lose. She wants to go and check on Vihaan. She fools Anupriya and runs to Vihaan’s place to know about him. She doesn’t see Vihaan. She doubts that he has run away. Anupriya gets a huge shock on seeing Chanchal in Riddhima’s place.

Anupriya wants to know where did Riddhima go. Riddhima has to get Vihaan home some how. She feels panicking further when she gets to see Vihaan’s house completely vacant. She is much depressed that he has cheated her. She can’t believe it. She recalls his promise that he can never cheat her. He has sworn on his mom to make her believe her. She gets scared that Kabir has disappeared Vihaan. She doesn’t want anything to get ruined. She gets threatened to Kabir.

Kabir has set the house on bomb to kill everyone if she backs out from the marriage. Kabir summons her at home for the marriage. He tells her that he will not spare anyone if she doesn’t come in ten minutes. He asks her to come home and save her family. Anupriya feels so proud of him that he has a solution for everything. He tells that Riddhima would be coming to them soon. Angre is unhappy with the marriage. He assists Anupriya. Kabir wants him to respect him as well. Angre gives a rude answer to him. He tells that he won’t be loyal to anyone than Vansh. Kabir spoils his mood.

Anupriya asks him to celebrate his success and marry Riddhima. Kabir tells that no one can stop the marriage now. He sounds pretty sure. Riddhima comes to check the bomb. She doesn’t find the bomb. Kabir tells her that he has the bomb with him. He warns her to just come for the marriage, else she will see the doom. He is sure that his plan will success. He sits in the mandap. The family reaches there and is quite unhappy.

Pandit asks the family to get Riddhima. Dadi wishes that Vansh comes back to her and stops the wrong happening. Ishani also misses Vansh. Anupriya asks Riddhima to look happy in front of the family. Riddhima doesn’t want to marry anyone else than Vansh. She lies her hope and faith on Vihaan. She gets an intuition that Vihaan will come. She feels helpless that she has no way to stop the marriage. She reaches the mandap. She wants to keep her love and loyalty towards Vansh. She decides to end her life. Vihaan makes an entry in the nick of time to stop the marriage. His entry in Vansh’s avatar shocks Kabir and the family.

Reviewed Rating for this particular episode Ishq Mein Marjawan 28th November 2020 Written Update Vansh returns: 5/5 This rating is solely based on the opinion of the writer. You may post your own take on the show in the comment section below.