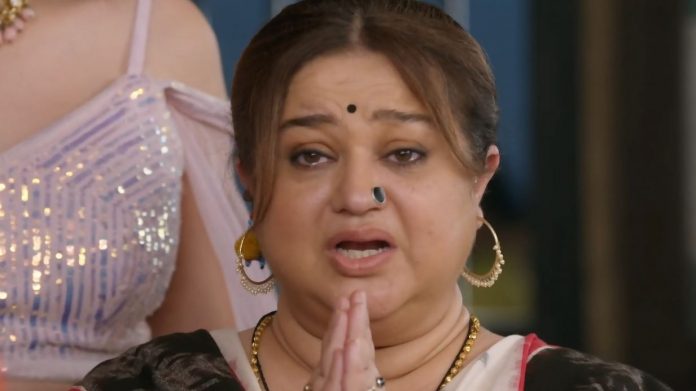 Kundali Bhagya 1st December 2020 Written Update Sarla bailed out Rishabh tells Sherlyn that Sarla can never harm their baby, there is surely some misunderstanding. Sherlyn refuses to his request when he asks her to withdraw the police complaint. Preeta does the rituals for Karwachauth. Karan feels she is really great that she is hiding her sorrow and performing the rituals with devotion. Karan and Preeta’s relations turn stronger with the fast. Ramona asks Mahira to rush to Karan and complete her fast.

Mahira and Preeta take blessings from elders. Kareena blesses Mahira, while Rakhi blesses Preeta. Rakhi asks Karan to give a gift to Preeta, something that she will ask him. She tells that Karan has to keep the ritual. Karan asks Preeta what does she want. Preeta asks for her mother Sarla. She tells that her happiness doesn’t matter if Sarla isn’t with her. She asks Karan to get Sarla for her. Preeta wants the fruit for her fast. She tells that she wants to see Sarla with her and that too happy. Rakhi has given good values to Karan and Rishabh.

She wants them to get Sarla back. She tells that Sarla can never add poison in the sweets. She asks Karan to give Preeta whatever she has asked. She tells that its Karan’s duty. Karan tells that he will bring Sarla home. This gives happiness to Rakhi and Preeta. Rakhi tells Sherlyn that she loves both her Bahus equally, she can’t upset Preeta to please Sherlyn. She feels Preeta’s demand is right. Ramona tells that Sarla had harmed Sherlyn’s baby.

Rakhi tells that she loves Sherlyn, but she can’t support one of them. She can’t do wrong with Preeta. She believes Sarla is innocent. Kareena doesn’t like Rakhi’s decision. She asks Karan not to go to help Sarla, she will be freed from the police. Rakhi apologizes to Preeta. Karan and Rishabh head to meet their lawyer. They compel him to bail Sarla as soon as possible. Karan tells that he has promised his wife that he will bring Sarla back. Shrishti and Janki don’t want to leave Sarla. Sarla wants them to go home.

Preeta reaches the police station to meet Sarla. Inspector tells her that Sarla won’t get any lawyer today. She apologizes that bail won’t be arranged. Karan and Rishabh reach there and bail out Sarla in time. Preeta happily cries that Karan has kept his word and freed Sarla. They go to see Sarla. Inspector asks them to take Sarla home. Preeta thanks Rishabh and the lawyer. Lawyer tells them that Sarla got the bail, but she maybe arrested once again, anything can happen if Sherlyn poses the same complaint again.

He asks Rishabh to solve the problem from the root. Sarla gets released. Preeta wants to end the case. Rishabh asks Lawyer how can she protect Sarla. Lawyer tells that the case maybe going to the court. Preeta meets Sarla and Shrishti. Janki apologizes to Karan and Rishabh for scolding Sherlyn so much. Rishabh understands them.

Sarla gets glad that Rishabh always supports her and this time even Karan believes her. Preeta tells that Karan and Rishabh have worked hard to get Sarla bailed. Sarla blesses Preeta and Karan. She tells Rishabh that she didn’t add any poison to har his baby. Rishabh can’t think wrong about her. He loves her like a son. He asks her not to feel guilty. He trusts her a lot. Karan too tells Sarla that he knows her since long and believes her.

Preeta is glad to see this. Sarla wants them to be together. Karan promises to look after Preeta. Ramona asks Mahira not to get angry. Sherlyn informs them that the bail is done and Sarla would be home in some time. Mahira loses her cool. Ramona asks Mahira to let Preeta play the victim card. She wants Mahira to plan the next move.

Reviewed Rating for this particular episode Kundali Bhagya 1st December 2020 Written Update Sarla bailed out: 4/5 This rating is solely based on the opinion of the writer. You may post your own take on the show in the comment section below.