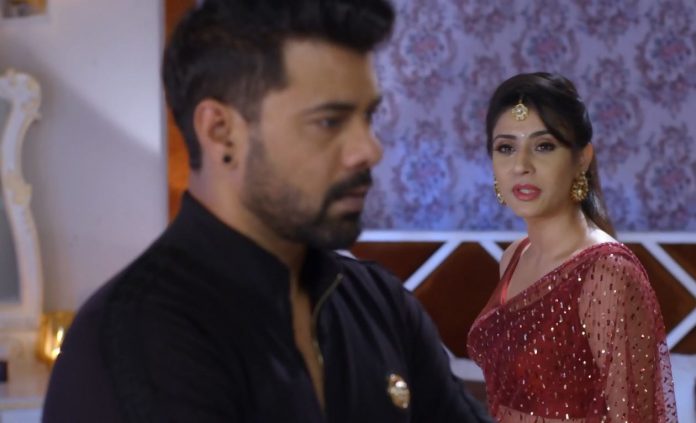 Kumkum Bhagya 7th December 2020 Written Update Abhi gets engaged Pragya tells Sarita that Prachi and Ranbir love each other and they should get married. Sarita tells her that she doesn’t think that Prachi’s marriage will happen easily. Pragya asks the reason that Sarita thinks so. Sarita tells her that she has to clear things with Abhi first so that Prachi gets the status of Abhi’s daughter, only then Kohli family will happily accept Prachi for Ranbir. She tells that Pallavi dislikes Prachi thinking she is middle-class, but knowing that Prachi is Abhi’s blood, even Pallavi will agree.

Pragya doesn’t think Prachi needs to tell her bloodline to have the alliance fixed. She tells that Ranbir loves Prachi without knowing her entire identity and background, he never questioned Prachi about it. She tells that Prachi will win Ranbir’s love and make a place in his family’s heart by her good values, she doesn’t need to be called Abhishek Mehra’s daughter to get her love. Sarita doesn’t think that it will be easy to convince Kohli family, who are also rigid just like Rhea.

She asks Pragya to meet Abhi once and clear the matter about Rhea’s hatred. She tells that Pragya and Abhi’s jodi should be made before Ranbir and Prachi. Pragya takes her advice. Abhi calls Pragya for a meet so that he can tell her about Rhea’s wrong demand for his marriage with Meera. He thinks just Pragya can stop his marriage with Meera by convincing Rhea with love. He wants Rhea and Pragya’s misunderstanding to end.

Pragya goes to meet Abhi at the cafe. She wants to tell him about Prachi, who got to know the complete truth and is awaiting her dad at home. She wants Abhi to end Prachi’s wait and meet her. Abhi informs Pragya about his marriage with Meera. He tells her that Rhea got insulted by Prachi and demanded a new mother for herself. He feels compelled now since Meera has accepted his marriage proposal. He doesn’t think that he is falling weak and not able to explain Rhea about Pragya. Pragya gets too hurt to know that he is getting engaged to Meera.

She gets upset and cries. She congratulates him. Abhi wants her to listen to him, since he wants her to stop the engagement. She doesn’t let him complete. As always, their talk remains incomplete and grows more misunderstandings between them. She asks him about the engagement date. He tells her that its tomorrow. Pragya is in shock that he is moving on in life when they were thinking to unite. Abhi invites her in the engagement. Pragya hides her shattered heart and tells him that she will come in his engagement to give best wishes.

Both Abhi and Pragya experience the same pain of separation once again, just because of Rhea’s immaturity. They have failed to explain Rhea where she is wrong and given up on their lives and happiness to satisfy Rhea’s demands. Will Abhi gets engaged to Meera? What will happen next? Will Pragya be able to unite the family by convincing Rhea? Will Pragya and Abhi show some strength in their characters to take a stand for their own lives at least? Keep reading.

Sarita knows that Pragya is much hurt because of Rhea. She tells Pragya that Abhi loves her a lot, which he has always proved. She asks Pragya to accept Abhi’s marriage proposal. She asks Pragya to marry Abhi. She tells that Pragya should be with Abhi and both the daughters. She wants to tell that parents should be together so that they bring the children together. She asks Pragya not to be shy to take Abhi’s help. Pragya gets emotional seeing Sarita doing a mother’s duty towards her. Sarita asks Pragya to just talk to Abhi and fix their relation. Pragya goes to check her phone. Shahana asks Sarita not to show wrong dreams to Pragya, since Abhi doesn’t loves her. Sarita tells that Abhi really loves Pragya. Shahana wishes the same.

Prachi arrives at the hospital to meet Ranbir. They both feel the separation pain. He recalls their moments. Prachi also has the same memories flashing in her eyes. Ranbir cries since he has a big burden on his heart, he has to get separated from Prachi forever. He hugs her and weeps. Prachi thinks he is upset for Pallavi’s condition, there isn’t any other reason. She consoles Ranbir. She tells that once Pallavi comes home, everything will be fine. Ranbir tells her that he is worried for their relationship, he has to fight his family to get his love.

Prachi doesn’t understand what he means. She tells that they shouldn’t fight to get their love, when its about family. He feels too helpless. She asks the reason. She wants him to just listen to Pallavi and keep family’s happiness first. He tells her that he can’t neglect her. She tells that mother’s love is unconditional, he should just accept Pallavi’s condition. She wants his promise. Vikram overhears their conversation. Prachi goes to see Pallavi and takes Dida’s permission. Ranbir asks Dida why did she send Prachi inside knowing Pallavi doesn’t like her. Prachi takes Pallavi’s welfare. Pallavi shows her criticism towards Prachi.

Reviewed Rating for this particular episode Kumkum Bhagya 7th December 2020 Written Update Abhi gets engaged: 3/5 This rating is solely based on the opinion of the writer. You may post your own take on the show in the comment section below.