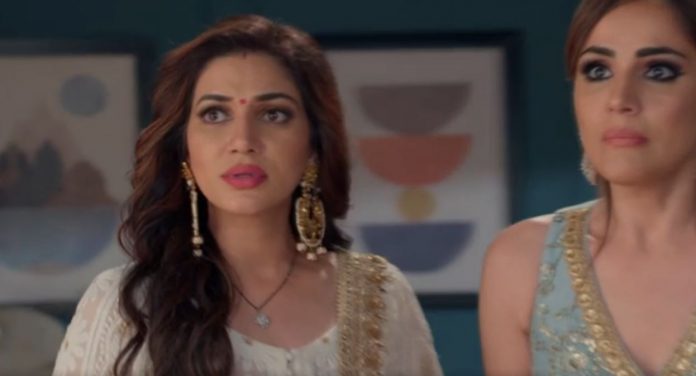 Choti Sardarni 5th December 2020 Written Update Aditi rages Sarabjeet gets a lecture from Manav. Manav tells that he is more hurt than Karan. He asks Sarabjeet not to talk about Karan’s pain. Sarabjeet sheds tears of sorrow for the sake of Karan. Manav tells them that he wanted to make Karan’s future better. Meher tells him that she had a sympathy with him till now, but she hates him after his big mistake. She decides to not give Karan to Manav. She tells him that she will have Karan with him. Manav applauds her for the wrong decision. He asks Meher to meet him in the court and know who gets Karan finally.

She regrets for Sarabjeet’s huge mistake. Sarabjeet and Meher have a protest on their way to home. The people demand Meher to return Karan to Manav so that she gets forgiveness. Sarabjeet encourages Meher to never lose hope. They face a furious Harleen at home. Harleen asks Sarabjeet about Manav Sharma. She wants an answer from Meher. Sarabjeet tells that Vikram Deewan is Manav Sharma. Harleen is in shock. He tells her that Meher has no reason for Vikram now. He asks her to calm down.

Harleen reprimands them counting their mistakes to keep such a critical matter a secret. She asks Meher doesn’t she matter to her. Meher tells that she didn’t wish to trouble her by sharing the matter. Harleen explains that the family has lost their name and reputation. She tells that Param is also suffering because of Meher’s defamation. Harleen asks Sarabjeet what will he answer Aditi, that Meher is the one who ruined Aditi’s married life. Sarabjeet asks her to believe him that Meher has no relation with Vikram now, Manav is just Meher’s past.

Sarabjeet and Harleen get into an argument. He sends Meher to pacify Param. Meher meets Param and finds her upset. She tries to talk to Param. She asks the reason that he is sad. Param tells that his friends told him that Karan isn’t his own brother. Meher asks him not to believe anyone. She asks Param not to worry, Karan and his bonding will never break. Param tells that he loves Karan a lot. Meher succeeds to cheer up Param. Harleen tells Sarabjeet that she knew that questions will be raised about Karan. She tells that they will give Karan to Vikram and end the matter.

Sarabjeet tells that he had kept the press conference to get the matter on his side, so that he can get Karan’s custody. He doesn’t want to lose his son. Aditi calls Sarabjeet to ask his welfare. He tells her that he is coming to meet her to discuss something really important. He finds Meher sleeping. He wishes she stays in peace. Meher wakes up. He tells her that he is going to explain the matter to Aditi. Meher wants to accompany him and apologize to Aditi.

He asks her not to feel guilty. He is pretty sure that Aditi will understand him. Vikram gets a mail from Devika. He speaks to him on call. He tells that he will treat Aditi with love and win her confidence. He feels its impossible to make Aditi against Sarabjeet. Devika tells that he will get Karan’s custody for sure when he gets Aditi on his side. Vikram agrees to work out her plan.

Pathak learns that his factory got raided. He is angered that Sarabjeet has ruined him by shutting all his illegal businesses. Sarabjeet humiliates Pathak on the call. Pathak can’t believe that he is finished. Sarabjeet tells Pathak that he will never forgive him for hurting Karan. He promises to ruin Pathak’s life. Pathak is frustrated. Sarabjeet and Harleen try to explain Aditi. Pathak calls Aditi and sends her Karan’s DNA report. Aditi is shell shocked that Meher is the woman who ruined her life. She doesn’t want to spare Meher. Sarabjeet and Harleen warn Aditi against hurting Meher. Will Aditi hurt Meher? Keep reading and comment your view on this show’s track.

Reviewed Rating for this particular episode Choti Sardarni 5th December 2020 Written Update Aditi rages: 2/5 This rating is solely based on the opinion of the writer. You may post your own take on the show in the comment section below.