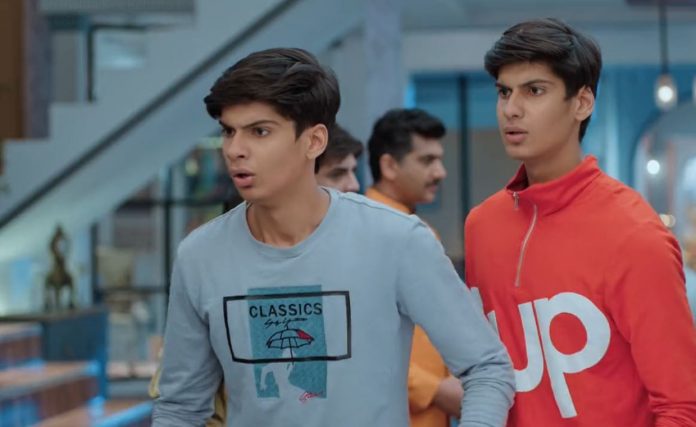 Yeh Rishta Lav Kush return 5th December 2020 Written Update Kairav enjoys his birthday with Kartik and Naira. Dadi gets glad watching the kids making a beautiful cake for Kairav and Kartik. Dadi wishes that Kartik was with them. Naksh tells them that they shall make a video call to Kartik and show their little celebrations. Vansh gets away when he finds Gayu staring at him. He is scared of Gayu, who wants to keep him away from the family. Naksh calls Naira when Kartik doesn’t answer.

Kairav asks the clown to take the call. Kartik stops Kairav from checking the phone. Kartik tells Naira that they will tell the truth to family instead lying again. Naira tells him that they shall make the family wish Kairav. He is scared that Kairav will be upset on knowing that Naira is the clown. Naira gives a solution to them. Naksh tells that Naira isn’t answering. Gayu tells that Kartik and Naira would be enjoying and not care for the family’s attention.

The family defends Kartik and Naira’s decision for leaving them for Gayu’s sake. Naira calls them back and suggests that they keep loud music so that no one knows the truth. She involves the family in their celebrations. Kartik likes Naira’s idea. The Goenka family is happy to see them together. Naira makes the family convinced. Kairav misses Naira. He wishes she was with him on his birthday. He thinks if she hates him so much.

Naira surprises him with a jelly cake of his choice. Riddhima lies that she had baked the cake for him. She gets the surprise for him. She gifts him drawing kit. Kartik is glad to see his son so happy just because of Naira. He tells that Naira has won today. He wants to celebrate their little victory by visiting their favorite spot. Naira makes a wish that Kairav soon accepts her. Naira becomes a part of his birthday, but by taking a disguise. Kairav’s friends ask him about his mom’s absence.

Kairav feels bad when his friends wants to know if his mom and dad are separated. Kairav tells them that his mom doesn’t live with him. He handles the matter by telling them that Naira is away to manage her dance academy. Hearing good about herself, Naira turns happy. Naksh knows the truth about Kartik and Naira staying separately for Kairav’s sake. He doesn’t want to tell the family about their decision. Later, Lav and Kush arrive home and surprise the family. They meet the family and ask about Kartik and Naira.

Surekha gets upset that they don’t care for their mother. Lav and Kush find Vansh on the wheelchair. They get much worried. The family doesn’t know how to tell them the truth. Kartik and Naira thank Riddhima.

Riddhima knows Naira’s pain that she isn’t able to talk to her son. Naira tells that she will stay away from Kairav until their distance ends. She is hopeful that Kairav will forgive her. Kartik tells that Kairav would be with them soon. Kairav goes to look for Kartik. Riddhima tells that they shall get back to the party. Riddhima promises to do the best for Kairav. Naira likes Riddhima after meeting her. Naira is excited that she heard such good things from Kairav. Kartik shares her joy. Kartik and Naira want their son to accept his parents together. Kairav finds Kartik and Naira together. He doesn’t know how to react, happy or angry.

Reviewed Rating for this particular episode Yeh Rishta Lav Kush return 5th December 2020 Written Update: 3/5 This rating is solely based on the opinion of the writer. You may post your own take on the show in the comment section below.