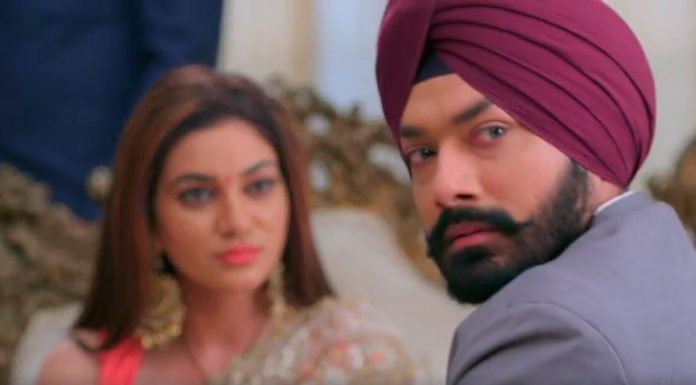 Choti Sardarni 9th December 2020 Written Update Tension toll Aditi gets convinced that Vikram has moved on and forgotten Meher. She realizes his longing for his son Karan. She wants to help him out, since she can’t see him in sorrow. Manav behaves nicely with her on his lawyer Devika’s advice. He wants Aditi to help him and takes her in confidence. Aditi decides to unite Manav and his son, if it can help her stay happy in her marriage. Aditi gets convinced that Karan should be with Karan.

She reaches Gill mansion with a proposal. Sarabjeet and Harleen are glad that Aditi came back to them and didn’t break off their relations. Aditi tells them that she got her family for the first time in life, so she has decided to let go the past and move on. She doesn’t want to lose them. She asks them if they want the same, if they are ready to make any sacrifice to keep relations with her.

Vikram accompanies her and stays silent while she makes a deal with Sarabjeet. Aditi tells them that she will forget everything if they accept her condition. Sarabjeet gives his word that he can do anything for her. He asks Aditi to make any wish. Aditi demands Karan’s custody for Vikram. Meher is left in shock. Sarabjeet wants to do anything for her happiness. He can’t decide about Karan’s custody alone without Meher’s consent. What will Meher decide now? Will Meher and Sarabjeet give away Karan to Vikram? What do you think? Should Meher give away her child to Manav for the sake of Aditi’s future? Comment your views and Keep reading.

Sarabjeet and Meher tell Param about the birds who stay in the nest protected. She wants to protect her children too. Sarabjeet knows that Meher is upset. He tries to make her happy. He knows that Aditi will come back to them. Aditi feels sorry that she has slapped Vikram in rage. She tells that she can understand his sorrow and longing for Karan. Param makes a wish to have an outing. Sarabjeet and Meher take Param and Karan to the park. They make a cute house for themselves.

Vikram wants to know Aditi’s plan. She tells him that she will make an emotional strike and get Karan. She tells that his efforts were wrong, she will put the right efforts and shake up the family. She wants to bring out the huge secret of the Gill family. He gets curious to know the matter. Sarabjeet and Meher reach home. They get surprised to meet Aditi at home. Aditi wants Harleen to support her. Harleen tells that she will always support her. Aditi tells that she has taken a decision to forgive everyone, but on one condition. Sarabjeet tells Aditi that he will give anything to her, the family’s happiness is because of her.

Reviewed Rating for this particular episode Choti Sardarni 9th December 2020 Written Update Tension toll: 5/5 This rating is solely based on the opinion of the writer. You may feel free to post your own take on the show in the comment section below.