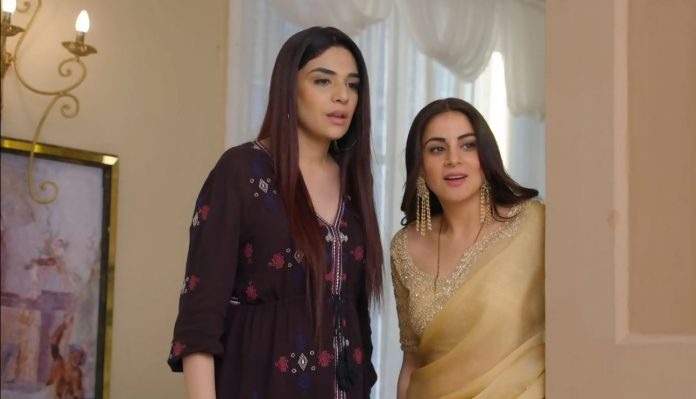 Kundali Bhagya 10th December 2020 Written Update Preeta and Shrishti make a great plan which gets working in this episode. Shrishti arrives at Luthra mansion to meet Preeta. She asks Girish to leave the door, since many guests are coming. Preeta tells Shrishti that she has executed the plan. Shrishti feels hungry. She asks Preeta to feed her something good. Preeta takes her to the kitchen. They get to see the guests coming home.

Sherlyn opens the door and welcomes Ramona. Shrishti’s plan gets revealed. She has called Ramona home for a special puja at Luthra house. She fools Ramona by using Rakhi’s name. She calls Ramona as Rakhi and invites her in the puja. She asks Ramona to get some sweets for the family. Ramona asks the reason for the puja. Shrishti wants her to come soon. Ramona gets tricked by Shrishti. She asks Sherlyn if the guests have come. She hands over the sweets to Kareena. She tells the family that Rakhi is called her home. She asks where is everyone else.

The pandit arrives next and tells the same thing that Rakhi called him for a puja. Kareena asks Karan if he knows about it. Karan has no idea either. Karan wants to ask Rakhi about it. Preeta and Shrishti enjoy the drama. Mahira meets Ramona and hugs her happily. Shrishti tells Preeta that she has spoken in Rakhi’s voice. Preeta wants Ramona to pay a price for the evil game. Sarla arrives there to meet Preeta.

Preeta didn’t know that Sarla will also come. Shrishti tells that she has called Sarla as well. She tells that Sarla should also get to see how they clear her name. She tells that it was tough to convince Sarla. She is glad that she didn’t get saved. They start their plan. Preeta tells that they will blame Ramona for the poisoned laddoos. Sarla tells that Rakhi has invited her for the puja. Kareena finds it strange that Rakhi didn’t tell her anything. Sherlyn senses something is wrong.

Karan asks Girish to call Preeta. Girish tells that Shrishti has come to meet Preeta. Sarla wonders why did Shrishti not tell her before. Preeta wants to begin her smart plan and shock the evil trio Sherlyn, Mahira and Ramona. The plan finally gets revealed. Shrishti consumes the sweets brought by Ramona. She acts to get poisoned. Preeta calls the entire family to attend Shrishti and tells that Shrishti was feeling hungry and consumed the sweets brought by Ramona. She blames Ramona for poisoning Shrishti by getting the spiked sweets. Ramona gets into an argument with Preeta and denies the blames.

Preeta provokes her to the level that Ramona herself admits the truth that she had brought the poisoned laddoos on the Karwachauth day, just once. She admits her crime, which proves Sarla’s innocent. Preeta and Shrishti prove out their smartness, and make their mother get a clean chit. Luthras learn Ramona’s evil plan. Will this happen for real or any dream? Such a big positive leap of progress is unexpected in Kumkum Bhagya or Kundali Bhagya. Keep reading for further detailed updates.

Sherlyn tells that she will call up Rakhi and know about the puja. She tells that Rakhi has gone to get medicines for Mahesh, which is strange, if she really kept the puja. She finds something fishy. Preeta and Shrishti get called by the family. Preeta tells Shrishti that she has handled the situation when Rakhi was going to the market. She had taken Rakhi’s phone and removes the battery. She tells that Rakhi shouldn’t worry for any matter. She wants to keep Rakhi away from the mess.

She wants to show the truth to Rakhi about her best friend Ramona. She tells that she has asked the driver to get Rakhi on time, when the truth comes out in front of everyone. Preeta shows super smartness for the first time. Shrishti and Preeta join hands and applaud their plan. Sherlyn tells that she isn’t able to reach Rakhi. Sarla tells her daughters that she has come on Rakhi’s invite. Preeta tells Kareena that she knew about the puja, once she had seen Pandit coming. She lies to the family.

Mahira tells Bani that Rakhi has kept a puja for Mahesh. Shrishti tells that she is much hungry. Sarla asks her not to eat anything in Preeta’s Sasural. Ramona asks her to have sweets. Shrishti feels she has a right on Preeta’s Sasural. She takes the sweets and eats. Sherlyn finds Preeta giving a signal to Shrishti. She asks Mahira to come with her so that she can tell what Preeta is up to. Rakhi returns home and learns about the puja. She wants to know who has kept the puja. Ramona tells that Rakhi has kept the puja. Pandit asks Rakhi to just attend the puja for Mahesh’s recovery.

Shrishti doesn’t waste time and begins her drama. She acts poisoned, which makes the Aroras tensed. Pandit doesn’t let Sherlyn and Mahira leave the puja. Rakhi asks Pandit to continue the puja. Shrishti and Preeta take the drama to the next level. Preeta tells that Shrishti is vomiting blood, her condition is same like Sherlyn and her, as if she has taken poison. Karan reaches the family to know what’s happening. Shrishti fakes the blood to show them. The family gets worried for Shrishti. Shrishti accuses Ramona for trying to kill her. She asks Ramona if she is taking revenge.

Shrishti acts wise on time. Ramona tells that she didn’t give any poison to her. Shrishti blames her for adding the poison in the sweets. Preeta also shouts on Ramona. They both shout the lie again and again that Ramona poisoned Shrishti. They provoke Ramona by the accusation. Ramona tells them that she didn’t add the poison in the sweets. She admits that she had added the poison in the sweets she got before. Ramona’s crime gets known to the entire family, thanks to Preeta and Shrishti’s brilliant drama. Sherlyn realizes that Arora sisters wanted to expose Ramona. Preeta confronts Ramona for framing Sarla. A good drama and revelation in this show after a long time. Keep reading.

Reviewed Rating for this particular episode Kundali Bhagya 10th December 2020 Written Update: 5/5 This rating is solely based on the opinion of the writer. You may post your own take on the show in the comment section below.