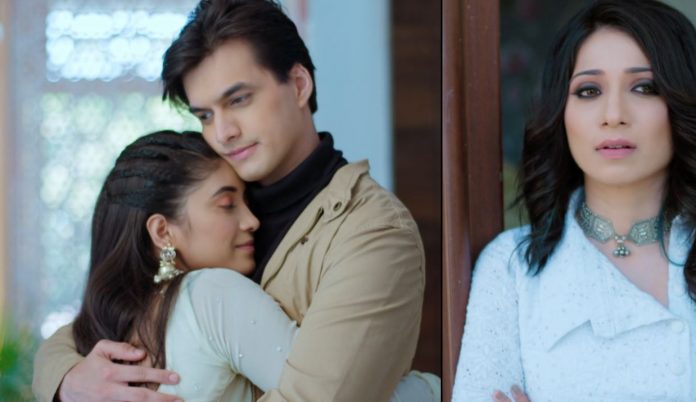 Yeh Rishta Shocked Kaira 9th December 2020 Written Update Kartik and Naira sing and dance in the lift. They don’t miss the chance to romance when their kid is away with Riddhima. After a long dance sequence, they realize that Kairav would be coming anytime. The watchman tries to prove their affair, but they fail his efforts. They pretend to be badly stuck in the lift. Secretary apologizes to them. They ask watchman to do his duty right. Watchman knows they have fooled the secretary. He wants to bring their affair in front of everyone.

Riddhima brings Kairav home. Kartik makes Naira hide. Kairav tells them that he has enjoyed the fest. He gets a gift for Aai as well. Riddhima asks them if Aai is an aged woman. Kartik tells that he doesn’t know. Naira happens to stay close and hear them out. Kartik tells that Kairav’s Aai cooks food for him. Kairav falls sick. Kartik informs Naira about Kairav. Naira quickly prepares a soup and gets medicines for him.

He tells that Riddhima had fed him at some cafe. Naira tells that she had asked Riddhima to not take him anywhere out, since he has a weak immunity. She knows that he can fall sick if he eats outside food. She mentions that she is Kairav’s mother and knows him well. Riddhima apologizes that she didn’t hear her instructions well. Kartik asks them to end the matter. Naira asks Riddhima to know about her work by discussing about Kairav.

Riddhima gets upset. She asks Naira to handle Kairav her way, if she doesn’t like her work and finds Kairav unsafe with her. She gives them Kairav’s painting, which brings a hope for Naira. Riddhima is emotionally hurt. Kartik and Naira want Riddhima to stay back. Naira feels bad that she has upset Riddhima. Kartik tells Naira that she will always be Kairav’s mother. She feels she has got rude and hurt Riddhima’s heart. She wants to speak to Riddhima once. Riddhima returns home. She shatters on seeing her son’s memories. She feels sorry.

Meanwhile, Lav and Kush advice Vansh to call Kairav and wish him. They want Vansh to clear the matter. Vansh misses Kairav. They ask Vansh to talk to Kairav only if he wants. They make a call to Kairav. Vansh speaks to Kairav after a long time. Kairav gets glad to receive Vansh’s call and finds him caring as before. Vansh disconnects the call when Gayu comes. Gayu stops Lav and Kush from their smartness. She wants Vansh to tell her if anyone troubles her. Kartik and Naira rush to meet Riddhima. Riddhima meets them.

They feel Riddhima is going to return Kairav’s file. They request Riddhima to not leave them midway and cure Kairav. Naira apologizes to her. Riddhima tells them that she has come to live in their building just to be close to Kairav. She tells that her friend owns the flat in the same building. She also feels sorry that she overreacted. She doesn’t want to lose their faith. Naira finds Riddhima’s decision strange. She is confused because of her sudden arrival. Kartik tells her that Riddhima keeps her personal and professional lives separately.

Kartik wants Naira with him. He doesn’t want to meet her secretly. She wishes Kairav forgives him. Riddhima’s shocking truth gets known to Kartik and Naira. They realize that Riddhima has lost her son Arjun. Riddhima sees Arjun in Kairav. Will Kartik and Naira realize Riddhima’s intentions? Keep reading.

Reviewed Rating for this particular episode Yeh Rishta Shocked Kaira 9th December 2020 Written Update: 5/5 This rating is solely based on the opinion of the writer. You may feel free to post your own take on the show in the comment section below.