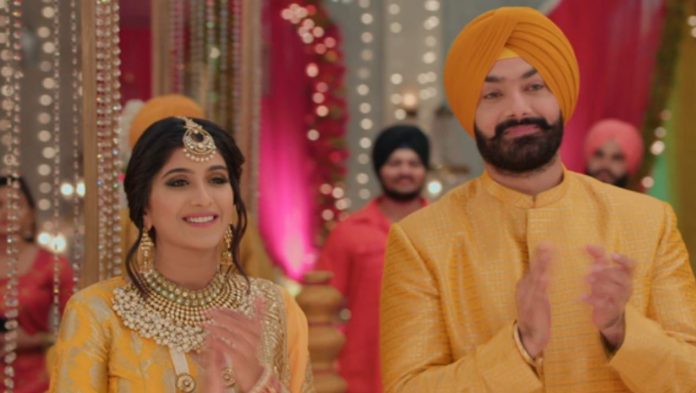 Choti Sardarni New journey 10th December Written Update Aditi demands Sarabjeet and Meher to hand over Karan to Vikram. She assures that she will raise Karan with love and give him all the happiness. Sarabjeet and Meher are in shock. Harleen tells Sarabjeet that his decision will either make their family or break them apart. She tells that its about Aditi’s future. She asks Sarabjeet to give Karan to Vikram. She tells that its not just about Karan, but also Aditi’s future. Sarabjeet refuses.

He asks Aditi not to ask for Karan, who is his life. He didn’t know that Vikram will brainwash Aditi. He refuses to her demand. Aditi tells Sarabjeet that she has another way to get Karan. She comes to the point. Sarabjeet asks if she will go away from the family or file a case on them. He asks Aditi to go ahead and do anything. Aditi tells that she will file a case for her own rights. She tells Sarabjeet that she had wrong information about her parents’ marriage before. She brings her parents’ picture.

She tells that the property doesn’t belong to them. She becomes the rightful owner of the entire property. She threatens to oust them from the house. Harleen loses her cool and slaps Aditi. Sarabjeet calms down Harleen. Aditi asks them to give Karan to Vikram, if they want the entire property back. Meher refuses to give her child to Vikram and Aditi, seeing their true colours. Harleen feels challenged and refuses to leave their house. She asks Aditi not to blackmail them. She tells that they shall meet in the court.

She wants the guards to throw away Aditi. Sarabjeet tells Harleen that Aditi is their sister and holds equal rights on the property. He tells that Aditi has more rights than them. Harleen asks Sarabjeet not to get emotional and leave his rights on the house. She refuses to leave. Sarabjeet tells that they didn’t differentiate between legitimate and illegitimate till now. He tells that he can sacrifice his life for Karan, the property is a small thing for him to sacrifice. He is glad that Karan isn’t selfish people like them. He tells that when Aditi gets her own children, she would differentiate between Karan and her child.

Kulwant and her family get released by Pathak’s help. Inspector tells that he is freeing her against his will. Kulwant knows that Pathak will ask for something instead this favor. She tells that she knows he has a mean motive. He tells that they will make their own party since Sarabjeet has resigned. He makes a plan to rule over the state. Kulwant likes the idea and joins hands with him. Sarabjeet tells Aditi that he will leave the house and take his family away. Harleen asks Meher to be practical and think of her sons.

Kulwant’s family returns home. Yuvi tells them about Kulwant’s rally. They rush to see Kulwant and Pathak together, campaigning for their new party. Kulwant just wants her profit, just like Pathak. They both take an advantage of Sarabjeet’s resignation from his party. Bittu and Rana ask Kulwant why is she supporting Pathak. She tells that Sarabjeet didn’t give her a chance like Pathak, she will not leave the chance and become a MLA now.

Sarabjeet tells Harleen that he isn’t emotional, he has thought well, Aditi was homeless all life, she deserves a good life, she has a right on the property, its not wrong if she is asking for her right. Sarabjeet doesn’t listen to Harleen. Harleen asks Meher where will Param and Karan lie. Meher sheds tears of sorrow but supports Sarabjeet’s decision. She doesn’t care of anything until Sarabjeet is with her. They pack their bags and take their children. They leave the Gill mansion. A new journey begins for Meher and Sarabjeet, when they struggle in the poverty-stricken life.

Reviewed Rating for this particular episode Ishq Mein Marjawan New challenge 10th December Written Update: 4/5 This rating is solely based on the opinion of the writer. You may feel free to post your own take on the show in the comment section below.