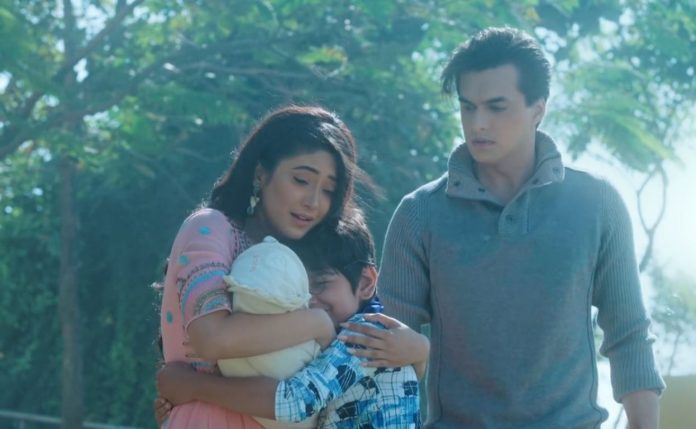 Yeh Rishta Riddhima evil twist 10th December 2020 Written Update Naira makes sweet kachoris for Kairav as per his likes. She gets Kartik’s message that Kairav has already taken the breakfast, Riddhima had prepared Idli for him. Naira doesn’t feel bad, since Riddhima had prepared something healthy. Kartik thanks Riddhima for the good food, but misses Naira’s special kachoris. Riddhima is glad. Kartik asks Kairav if he is missing the kachoris. Kairav tells that Idli is good, but he wants to have the kachoris. Kartik serves the Kachoris to him.

Naira gets happy to know that Kairav has eaten the kachoris and liked it too. She dances with joy. Manish makes a plan. He is excited to go to Mumbai and meet Kartik and Naira. Dadi tells that even she wanted to come along. Manish tells that he has an important meeting there. Lav and Kush are also excited to go. Manish asks everyone to get ready if they want to come. Surekha stops her sons from accompanying Manish.

Suwarna asks Manish to make a video call after reaching. Naksh is tensed that Manish will know the truth of Kartik and Naira’s separated stay. He stops Manish from the travel. He tells Manish that he isn’t fit for travel. He doesn’t want Manish to take any risk, until doctor allows him for travelling. Manish asks about the meeting.

Naksh asks Manish to let Kartik attend the meeting. He doesn’t let Manish go anywhere for the sake of his health. Dadi and family agree with Naksh. Manish gets upset. Naira finds the same guy at the building, the guy wants to meet Riddhima. She goes to help. She meets Vikas and tells that she knows Riddhima. He tells her more about Riddhima’s past. She is moved to know that Riddhima lost her husband and son in a car accident. Naira realizes the pain Riddhima is hiding within. Riddhima takes care of Kairav.

Kairav dreams of a union with Naira. He talks to Naira in sleepy state, while Riddhima gets glad that he called her mumma. She calls him Arjun and hugs him. Vikas tells Naira about Riddhima’s son Arjun. Kartik finds Riddhima with Kairav. He knows she is good at taking care of Kairav. He tells her that he wanted to enroll Kairav in an art class. She likes the idea. He tells that he will take Kairav home. Vikas lands up at her flat to meet her. Vikas finds Kartik there. Kartik greets him and makes a leave.

Naira hides from Kairav. Vikas asks Riddhima when did she come back. Riddhima doesn’t like to bond with her old friends. She avoids Vikas. He tells that he has come to meet her and give condolence for her family’s loss. He knows that it was a tough time for her, she was in depression. Riddhima tells that she is able to deal with her sorrow, she counsels others and can counsel herself as well.

She hides her truth. She doesn’t want Kartik and Naira to know it. Naira reveals Riddhima’s past to Kartik. They find Riddhima dealing with a big sorrow. He tells that Riddhima is always so positive. She tells that she will never hurt Riddhima’s heart again. She plans to call Riddhima for dinner. Kartik likes her idea. Riddhima feels Vikas ruined everything. Riddhima sees Kartik and Kairav’s picture. She feels that her son is with her. She wishes the picture gets true. The watchman gets confused seeing Kartik with Naira and Riddhima. Riddhima likes to go for dinner with them. Kairav sees Kartik and Riddhima.

He asks them to take him for dinner as well. Kartik wants him to sleep. Kairav insists a lot. Naira doesn’t want Kartik to refuse to Kairav. She stays back for Kairav’s sake. She asks Kartik to go with Riddhima and Kairav. Riddhima feels like family. She gets false hopes in mind. Naira tells Kartik that its okay, they will go sometime else. Riddhima turns evil-minded. Will Riddhima try to snatch Kartik and Kairav from Naira to complete her family? Keep reading.

Reviewed Rating for this particular episode Yeh Rishta Riddhima evil twist 10th December 2020 Written Update: 4/5 This rating is solely based on the opinion of the writer. You may post your own take on the show in the comment section below.