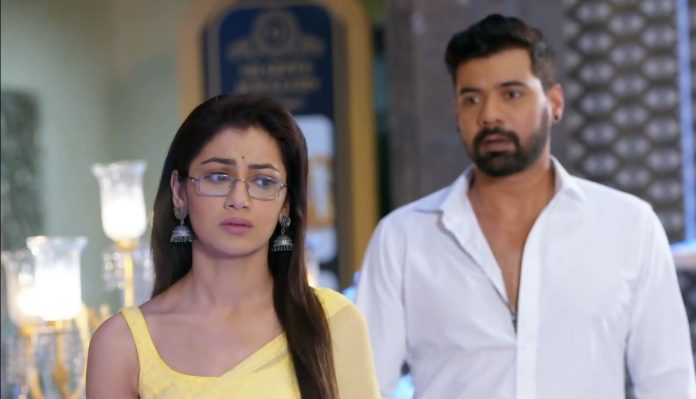 Kumkum Bhagya 14th December 2020 Written Update Abhi accuses Pragya Abhi senses Pragya around, while Pragya feels him. Pragya is upset that Abhi isn’t around. She was expecting him around, but doesn’t see him. She feels sad and longs for him again. Abhi realizes that its not Pragya. Abhi meets someone else. The lady turns out to be his big fan. She takes his autograph. Abhi likes to enjoy his fandom. The lady reads what he wrote. She tells that her name isn’t Pragya. Jeweller Ramnik tells Abhi that his wife would be liking the jewellery a lot, she is busy. He sees Pragya and calls for her.

Abhi doesn’t see Pragya behind. Pragya goes to meet Ramnik. Ramnik tells the staff that Abhi is marrying his wife once again, following the same trend of remarriage after silver jubilee. He meets Pragya and asks her to select the jewellery. Prachi tells that she likes the jewellery, but its expensive. Ramnik asks her to just select the jewellery, his parents will pay for it. He signs about Abhi. Prachi doesn’t understand. Pragya tells her that they have no money to pay, they will not buy anything. Sarita and Shahana get excited to try the costly jewellery.

Abhi and Pragya go for some work and leave the jewellery store at the same time. Sarita and Shahana enjoy the VIP treatment they receive from the staff. They get the free drinks and laugh. Tony meets Abhi. He realizes how rich Abhi is. He lies to Abhi that he is a big fan. He thinks to take Abhi hostage if his robbery plan fails.

Pragya comes across Abhi. She hears him talking on phone. He wants to get the engagement invite cards soon so that he gives the first card to Pragya. This breaks Pragya’s heart again. Pragya’s tears get tears in his eyes as well.

They see each other’s tears and still stick to their ego. He mentions that she always likes to become like him, and picked his bad habit as well to drag the matter, but this time he isn’t making any mistake. He calls her wrong. She can’t listen any more accusations and just leaves from there, leaving the clarification incomplete. He tells her that she has a bad habit to drag the matters. He doesn’t want to argue with her. He asks her not to fight.

He tells her that he is marrying Meera because of Rhea’s obstinacy, he has no interest in Meera. He tells that he won’t be quiet, he will blame her, she is responsible for his marriage. He tells that she wanted to get free from him and now she is free. He angrily vents out his frustration. He realizes that she actually left before time.

Pragya faces Meera at the mall. Meera thinks Pragya will confront her decision of marrying Abhi and rebuke her. Pragya is grateful to Meera for giving mother’s love to Rhea. She feels indebted to Meera. She tells that she will be more than happy to help Meera in future. Meera feels bad that Pragya is so nice towards her. Pragya gets to see Abhi and is hurt by his words. The jewellery store gets under evil sight by Tony’s gang. Tony tells his friends that the jewellery is too costly. He wants to find the antique designs as well, which costs in crores.

Ramnik shows the exclusive designs to Abhi. He asks the staff to call Abhi’s wife for the selection. Aaliya tells Meera that she has called the shopkeeper to show her the best designs. She feels Pragya will be away from them. Meera tells her that Pragya is in the same shopping mall. She doesn’t want to marry Abhi because of guilt. She tells that Pragya is a nice lady. She doesn’t want to snatch Pragya’s husband.

Aaliya asks her not to get manipulated by Pragya. She asks Meera to marry Abhi for the sake of Rhea. Meera tells that she wants to marry Abhi because she loves him. Aaliya instructs her to protect Abhi’s happiness from Pragya. Meera agrees to stick around Abhi. She wants to ask Pragya if she has no objection with the marriage. Aaliya wants to keep an eye on simple and sweet Meera, so that Pragya doesn’t trap Meera in her words.

Rhea buys a ring for Ranbir. She sees Prachi there. Rhea wants to avoid her. Shahana confronts Rhea for insulting Pragya and Prachi. She tells that Pragya cried a lot because of Rhea. She warns Rhea against hurting her family. Rhea doesn’t think Shahana has any right on Pragya. She insults Shahana.

Prachi takes a stand for Shahana. She gets into an argument with Rhea and lectures further. Rhea hates Prachi further. Abhi and Pragya will be facing the same old hostage situation when the robbers take down the mall captive. Abhi and Pragya will realize their immense love once they fall into danger due to the robbers. The captivity twist will bring them together, hopefully. What do you think about the upcoming twists in the show? Keep reading.

Reviewed Rating for this particular episode Kumkum Bhagya 14th December 2020 Written Update Abhi accuses Pragya: 2/5 This rating is solely based on the opinion of the writer. You may post your own take on the show in the comment section below.