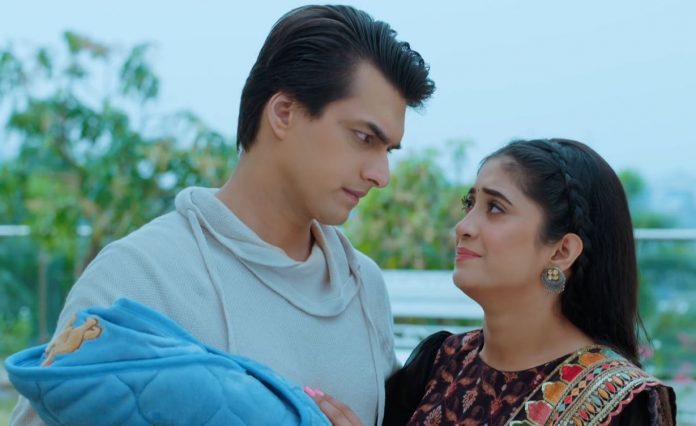 Yeh Rishta Riddhima insane move 17th December 2020 Written Update Naira proves to be the best mother for Kairav and Akshara. She succeeds to win back her son. Kartik asks Naira to come out quickly. Riddhima doesn’t want to hinder their moment, but feels lonely. Kartik, Naira and Kairav witness a miracle when they spot the rainbow in the pink sky. It feels magical to them. They can’t be more happy. Kairav gets happy to meet Akshara. Riddhima feels her Arjun is getting away from her. Naira is glad that her son is back with her.

Naira blesses her son with lots of joy. Kairav feels happy that she is finally back and loves him. He wants to plan a surprise for Naira. He asks Riddhima to help her. Kartik hugs Naira that they finally made it. He tells that her trust has won. The have a moment. Watchman gets the building secretary to expose their affair. He tells that he had always tried to prove that they have an affair. He tells that he has caught them romancing everywhere. Secretary asks Kartik what’s happening. Kartik reprimands the watchman for calling his pure relation an affair.

He tells that he is Naira’s husband, they are married, they are legally husband and wife. He shows their marriage picture. He teaches a lesson to the curious watchman. He warns the watchman not to mess with them. He doesn’t want him to get into their personal matter. Naira laughs on the watchman’s thinking. Kartik doesn’t want to tell the truth to anyone. Naira asks him to stop Riddhima from sharing any truth with Kairav. He wants her to live the moment to the fullest. She wants to live the moment together. She gives the good news to Naksh.

She tells that she has done it, Kairav is back with her. Naksh is very happy to know it. The family wants to know the reason for his happiness. Naksh lies to them about his recipe review. He hides about Kairav’s matter. The Goenkas wish Naksh always stays happy. Kairav welcomes Kartik and Naira home. Riddhima feels estranged when Kartik’s family completes. Naira wants Riddhima to come along. Kairav stops her saying he just wants his family. Riddhima cries on the humiliation and goes away. Naksh congratulates Naira for winning the battle.

She wants Naira to come back soon. Gayu doesn’t like to hear anything related to Naira’s return. Kairav makes a painting to gift Naira. She tells him that he can get angry on her, but not go away. She promises to never go away. She tells that she can’t live without him. Kartik and Kairav tell her that they feel lost without her. Naira thanks Kartik for the encouraging words. She tells that she will not go away from them at any cost. Naira feels lucky to get Kartik as her husband. She is grateful that he always supported her and made the toughest thing possible.

Kartik tells that he is selfish, he wants her in his life all the time. They confess their feelings for each other. They know they can conquer anything together. Kartik and Naira hope that the entire family is together again. Kairav takes their hand impressions to mark a new beginning. On the other side, Riddhima cries for Arjun. She still can’t tolerate the huge loss. She reminisces the past. She has got personally involved in her counselling work. She knows that her medical license got cancelled because of the complaints against her.

Kartik and Naira happen to meet Riddhima. Riddhima hides the papers from them. They apologize for Kairav’s behavior. They invite Riddhima for lunch. They thank her for counselling Kairav and uniting their family. They want to celebrate their togetherness. Riddhima accepts the invitation. Dadi gets upset seeing Gayu’s tear flood. She questions Gayu. Gayu tells her that Naksh spoke to Naira with love, he wants her back home. Gayu doesn’t want Naira to get any importance. She feels she has done a big mistake by marrying in the same household. She vents out her hatred. Naksh wants to find a way to unite his sisters. Dadi is troubled by Gayu’s behavior.

Kartik and Naira cut a cake. Kairav enjoys their company. Riddhima joins their family. Naira gets a strange vibe from Riddhima. Riddhima reveals the truth to Kairav that Naira used to stay in the same building and send food for him. She tries to distant Kairav from Naira. Kartik and Naira get afraid for Kairav’s reaction. What will Kartik and Naira do now? Keep reading.

Reviewed Rating for this particular episode Yeh Rishta Riddhima insane move 17th December 2020 Written Update: 5/5 This rating is solely based on the opinion of the writer. You may post your own take on the show in the comment section below.