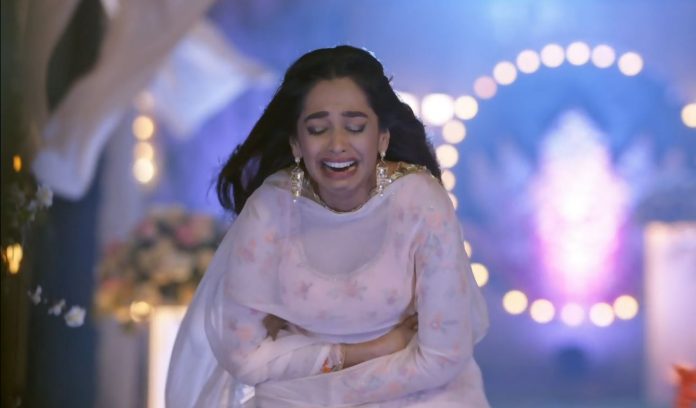 Kumkum Bhagya 25th December 2020 Written Update Prachi shatters Rhea looks for Ranbir everywhere. She suspects that Ranbir is with Prachi. She doesn’t see Prachi with Shahana. She realizes that Ranbir is together with Prachi in Aryan’s room. Aryan asks Shahana to go to Prachi. He asks if Ranbir and Prachi’s conversation isn’t done. He tells about their problem. Shahana tells him that she has tried to solve the problem, she has locked the room from outside so that their problem ends.

Aryan tells her that Ranbir is drunk, he is much worried for his engagement with Rhea. He tells that Pallavi is pressurizing Ranbir for marrying Rhea. He tells her that Prachi will break down if Ranbir tells the entire matter to Prachi. Shahana wants to protect Prachi from sorrow. Prachi asks Ranbir why is he ignoring her. Ranbir recalls his promise to Pallavi. He is helpless and cries a lot. Ranbir tells that he loves Prachi a lot, even if he isn’t with her.

She wants to know why is he saying such a thing. He tells that the world is bad and will snatch their love, maybe they will not unite. He faints down. Rhea finds Prachi with Ranbir in an awkward position. She misunderstands Prachi. She yells at Prachi and insults her. She tells Prachi that she will not let Prachi succeed. Prachi tells that Ranbir and she got engaged already. Rhea asks her if anyone is aware of the kiddish engagement. She breaks Prachi’s heart by telling her the truth. She tells that Ranbir is going to dump her.

Prachi doesn’t believe her. Rhea invites Prachi in Ranbir and her engagement. Prachi doesn’t think Ranbir will accept Rhea. Rhea asks Prachi to prove her engagement. She humiliates Prachi and wants her out of her house. Shahana asks Rhea not to take advantage of Pallavi’s health issues. Rhea tells that Ranbir has just loved her since ever. She asks Shahana not to believe such fake stories. She leaves Shahana upset. Shahana goes to find Prachi. Aaliya stays occupied in the function arrangements. Sarita finds Baljeet upset.

Baljeet tells Sarita that Abhi and Pragya are being wronged, they are crying in pain, Abhi is helpless because of his daughters, he is heartbroken. Prachi is also heartbroken at this time, just like Abhi and Pragya. Rhea wants Aryan to leave. She wants to ask Ranbir about Prachi. Aryan tells that Prachi can’t misuse the situation. He feels Rhea has demeaned Prachi, who is really innocent. He asks her not to accuse Prachi again.

Meanwhile, Pragya and Abhi reminisce their old times. They had much understanding even when they had little fights. They want each other to be happy. Pragya was jealous to know that someone will replace her in his life. She feels she was wrong to trust Abhi, who broke all his promises. Abhi wants her pretence to end. He keeps asking if she is upset. Pragya tells him that she is scared of the storm. She wants him to leave her alone. He tells her that he loves everything what she loves. She tells him that everything related to him brings tears for him when there is no love. He knows that the storm will affect many lives.

Meera tells Abhi that she doesn’t think she should wear the costly necklace. He tells that he didn’t buy the necklace, maybe it fell into the bag by mistake. He asks her to keep wearing it, and gift it to anyone if she wants to discard. He tells that he will pay Ramnik. Goga instructs his goons to come to Abhi’s house by taking the back door. Shahana finds Prachi shattered. Prachi tells Shahana that Rhea has told such bad things about Ranbir.

She can’t face the harsh truth. Goga welcomes his goons. He tells them that they should take waiter’s disguises so that they don’t need to show their ID card. He tells that he will faint down Meera and take the necklace from her. Aryan and Rhea take care of Ranbir. Aaliya takes Rhea with him. Aryan gets relieved. Pragya holds memories of the house where she has spent her life with Abhi. Sarita asks Pragya if she had come to this house as Abhi’s wife. Pragya tells that the house was different, but looked the same. Sarita tells that she will not explain much. She tells that Abhi loves Pragya a lot, but Pragya is too stubborn. Sarita tries to make Pragya understand her mistake. Pragya enquires about Prachi and Shahana. Will Pragya know about Prachi’s heartbreak and help her out? Keep reading.

Reviewed Rating for this particular episode Kumkum Bhagya 25th December 2020 Written Update Prachi shatters:2/5 This rating is solely based on the opinion of the writer. You may post your own take on the show in the comment section below.