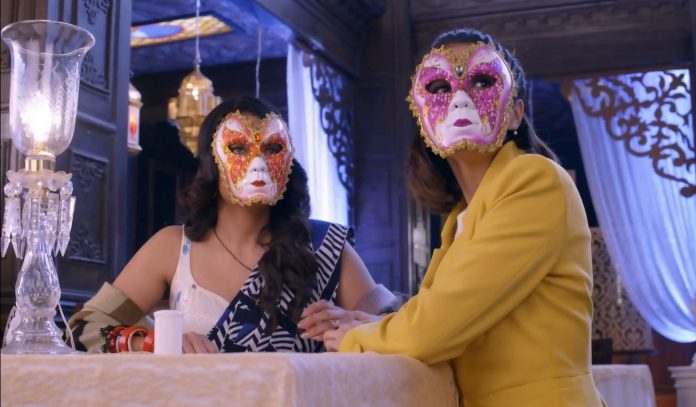 Kundali Bhagya 24 December 2020 Written Update Sherlyn attacks Preeta Mahira grows jealous to see Karan getting closer and closer to Preeta. Karan and Preeta totally enjoy their private time on the honeymoon. Karan thinks of the many secrets hidden in Preeta’s life. They have a funny banter. She wants to laugh at Karan’s silly talks. She enjoys his jealousy and doesn’t answer him when he questions her choices. She wants him to understand her feelings. They become the winners of the paper dance.

The resort manager praises Karan and Preeta’s arm-in-arm chemistry. He tells that the Karan Luthra and his pretty wife have proved to be the best. Mahira gets impulsive, but luckily has Sherlyn on her side to guide her. Sherlyn tells that once Luthras know their lie, Rakhi will not spare them. She tells Mahira that they should just focus on their main motive, that’s to separate Preeta from Karan forever and make Preeta’s life miserable.

Mahira traps Preeta in her plan and corners her. Preeta tells that she will not follow her and fall into her trap. She doesn’t want Mahira to follow Karan and her. She asks Mahira what is she planning this time that she has come to the same resort by following them.

Preeta doesn’t notice Sherlyn behind. Sherlyn cleverly attacks Preeta and faints her down. Preeta doesn’t want to lose out Karan. She tries hard to fight the evil duo. Sherlyn tells Mahira that Preeta is out of her way now. She encourages Mahira to spike Karan’s drink and then get away with him. Will Shrishti and Sameer come to Preeta’s rescue at the right time and spike Mahira’s drink to save Karan? Is Preeta planning something smartly big to trap Mahira in her own plans this time? Keep reading for a detailed update.

Today, Kundali Bhagya 24 December 2020, Karan tells Preeta that he is super cool, he never gets angry. Preeta likes his cool side. Sameer and Shrishti take disguise to be around Preeta and Karan. Shrishti wants to beat up Sherlyn and Mahira. Sameer tells that once Mahira takes the drink, she will faint down. Karan and Preeta become the power couple of the evening. Sameer gives the complimentary drinks. Mahira takes the drink. Preeta clears Karan’s misunderstanding about Mr. Kapoor, aged like her grandpa. Karan laughs at his own self. Preeta hugs him.

Karan and Preeta celebrate their win in the dance competition. His fans wish him further and take selfies with him. Shrishti wants Preeta to come out and talk to her. Karan stops Preeta from going out. Preeta tells that she is going to the room to change her shoes. Karan accompanies her. Mahira loses out after taking the spiked drink. Sherlyn gets suspicious on seeing her fainted. Sameer tells Shrishti that their plan has worked. Shrishti share the good news to Preeta that Mahira is knocked down by her own plans of spiking the drink.

Shrishti tells Preeta that Mahira will wake up after 24 hours. She asks Preeta to go to her room and enjoy her time with Karan. Shrishti and Sameer also come close while rejoicing on their plan’s success. Preeta heads to her room. She gets a huge shock to see Mahira very much conscious. She tells that she had seen Mahira coming to the hotel by following them. Sherlyn doesn’t miss a chance and attacks Preeta by hitting a vase on her head. The evil duo faint down Preeta and lock her in the storeroom.

Mahira thanks Sherlyn for noticing Shrishti and Sameer and knowing their plan. Sherlyn tells her that Karan won’t get Preeta in the room, he will go to find her on the dance floor, where he will see Mahira in trouble. She tells that some goons will tease Mahira so that Karan becomes her savior. She asks Mahira to go for it. Mahira tells that Karan will save her and take her to the room. Karan looks for Preeta. Sherlyn wishes Mahira all the best. Mahira gets dressed up. Some men tease her.

She thinks Sherlyn has hired those goons. Karan gets drunk. He wants to fight with Preeta when she comes to him. He gets restless without her. Mahira shouts for help. Karan finds Mahira in trouble and runs to save her. He fights the goons when she asks for help. Karan beats the goons and makes them run away. He tells that Preeta already told him about her presence. He takes her to the room to take care of her wound.

Sherlyn doesn’t want Preeta to get freed. She ties up Preeta. She knows that nobody can fail Mahira’s plan this time. Karan asks Mahira what is she doing in the same resort. Mahira doesn’t answer him. She misleads him. She plans to get close to him in his honeymoon suite. She gets time to spike his drink. Mahira informs Sherlyn that she has started to execute her plan. Sherlyn is happy for Mahira. She tells that she is liking the way Karan is caring for her. Will Mahira succeed to get Karan? Stay tuned for the next post.

Reviewed Rating for this particular episode Kundali Bhagya 24 December 2020 Written Update Sherlyn attacks Preeta:3/5 This rating is solely based on the opinion of the writer. You may post your own take on the show in the comment section below.