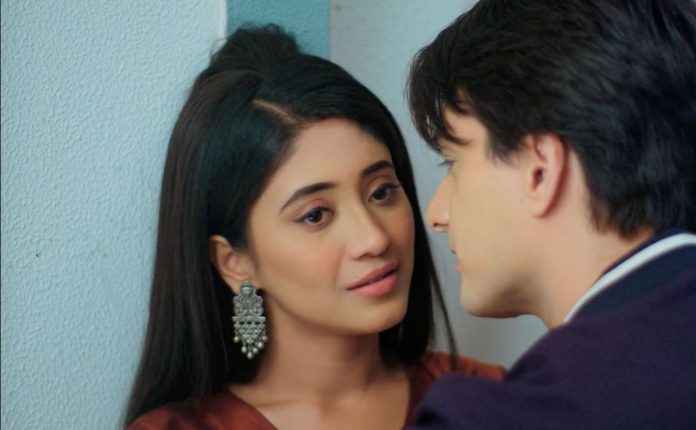 Yeh Rishta Goenkas torn apart Upcoming twists Star Plus Naira tells Kartik that she isn’t going far from him, she will always be with him. Kartik can’t tolerate to live without her. Naira has filled strength in the kids as well. She wants the kids to be determined. She has been an inspiration for everyone in the Goenka house. She proves that a determined person can do anything and they should not stop trying. Naira proves her teaching wrong. Kartik feels he can’t do anything without Naira, she has to be with him all the time until they live. Kartik and Naira’s romantic moments are seen.

Kartik wants to live many dreams with her. He visualizes their dance on a romantic song in his dream, but Naira puts a stop to his romance. She wants to surprise him on the Christmas, when they celebrate with the kids. Kartik and Naira’s happy moments and romance time gets a hurdle in between when they learn about Manish’s decision of house division. Kartik can’t stop asking Manish about the decision. Manish accuses the family for making him sound like a culprit, when he was asking Samarth and Gayu to focus on Vansh.

He feels Surekha also criticized Kartik for being unjust towards her sons Lav and Kush. He tells that he is much hurt that Samarth has made a new business for himself in Mumbai. Manish can’t tolerate to see hatred for himself in the family’s sight. Manish tells them that he can’t accept the big accusations on himself, from those whom they love. He tells that he can’t tolerate everyone’s anger, hatred and ill feelings for long.

He complains about Samarth, Gayu and Surekha. He tells that he isn’t an elderly figure for the family now, he isn’t the head of the family, he is just a biased man who is disliked by everyone. He further adds that he wants to have a place for himself in their hearts. He feels the family doubts his intentions. He questions Akhilesh if Surekha doesn’t have any insecurity. He tells them that Kartik has always loved Akhilesh and Surekha as his own parents. He comments that Akhilesh and Surekha don’t trust their own upbringing.

He feels there is loss of faith in the family now, and its better that they get divided. He tells that they shall not run after money, if they want the money, then its better to get divided and take away with the property share. Kartik and Naira try hard to explain that they can never live without each other. Naira values the family a lot. She tells Manish that the joint family should always be together. Manish tells that no one can pull the family together when the hearts got divided. He tries his best to do justice with everyone.

It gets heart aching for the family to accept Manish’s decision. Everyone has differences, but don’t want the house division. Manish tells that he is ready to give away everything to the family. Manish doesn’t want to take his decision back at any cost. Lav and Kush try to request Kartik and Naira so that they convince Manish to change his decision. They know that even the kids would want them to be together. They tell that they are in a phase where they want the family united. They wish that the elders understand their hearts.

They rely on Naira. They just want Naira to help them and bring the family to a union. Kartik also feels that Naira is the key to their happiness and union. He wants Naira to stop the house decision. He doesn’t think there is some way. Naira tells that they have to find a way by talking to Gayu and Surekha first. They try to prove to Manish that Gayu and Surekha are against the house division. They don’t want Manish to separate their family, house, property and business. Dadi gets a hope that Manish will be changing his decision.

Kartik asks Manish if he will not think of the kids before taking such a decision. Manish tells that he has done everything for the betterment of the family. He tells that the same problems will start once he changes his decision. He tells Kartik that he just wants his son along with him to support his decision. Kartik and Naira are into a big fix with Manish’s obstinate decision. What twist will come that Kartik and Naira will part ways, such that the latter receives death? Keep reading.

Reviewed Rating for this particular episode Yeh Rishta Goenkas torn apart Upcoming twists Star Plus:3/5 This rating is solely based on the opinion of the writer. You may post your own take on the show in the comment section below.