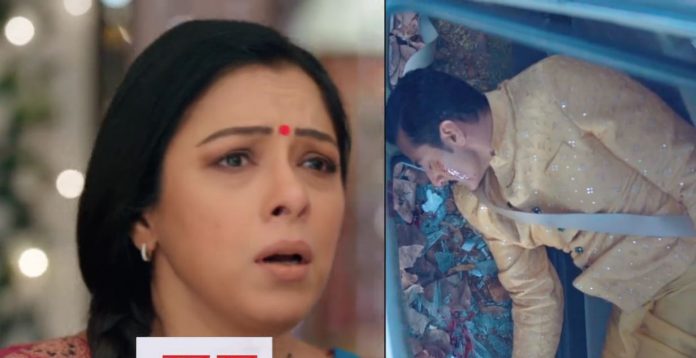 Anupama Vanraj to die 31st December 2020 Written Update Vanraj and Kavya get into a never-ending argument. He is fed up of her insecurities. He tells her that he had left the family to come to stay with her. He doesn’t want him to take away his life. He tells that he had to bless his son, but she ruined it. She asks him why is he taking Anupama’s side. He calls her wrong. She tells him that she has seen Anupama and him as a couple in all the family functions. She tells that he has to secure her rights as well.

She wants her rights when they visit his family. She doesn’t understand his point. The same issue crops again. Anupama is glad that Paritosh and Kinjal got married. Rakhi had failed to stop the marriage. Kinjal wants an answer from Rakhi about her move to invite Kavya. Kavya tells Vanraj that she isn’t a lover for him, he is just passing time with her. He tells her that he had left his house and family for her sake. She asks him not to count his favor.

She adds that he didn’t leave anyone, he is also doing his duties towards the family. She wants him to divorce Anupama. She asks him to go back to his family where his soul resides. She doesn’t want his divided love. She insults him and wants him to leave her house. Leela asks Rakhi to answer Paritosh and Kinjal’s questions. Paritosh wants to know why did Rakhi intend bad. Rakhi pretends that she wanted things to patch up in Kinjal’s Sasural.

She doesn’t want her relation to turn bad with them. She tells that she didn’t know about Kavya’s madness and rage to spoil Kinjal’s marriage. She apologizes to them. Anupama wants them to forget everything and just move on. Rakhi felt the marriage will not happen after the drama, but Anupama has handled everything well. Vanraj breaks up with Kavya. He tells her that its over between them. Anupama forgives Rakhi for her evil move.

She knows that Rakhi really wanted to stop the marriage. Anupama threatens Rakhi of a punishment that their relation breaks forever. She wants Rakhi to not hurt her family. She tells that she will attempt to win Rakhi’s heart. She warns Rakhi to not dare hurt anyone’s sentiments when she visits next time. Meanwhile, Leela and Hasmukh apologize to Anupama’s mother that they couldn’t keep their promise to secure Anupama’s happiness.

Anupama’s mother confronts Leela for hiding about her son. She tells that Anupama didn’t share the sorrow with her. She tells them that the matter was known to her from outsiders, which was much painful for her. She wanted Leela to share the matter. She asks Leela if she didn’t stop Vanraj from cheating his wife. She isn’t scared to question Leela. She tells them that she had taught good values to Anupama and made her a tolerant soul.

She feels her teachings were wrong. She just wants Anupama to ask for her rights and fight for it. Leela still takes Vanraj’s side. Anupama’s mother tells Leela has failed as a mother. She wishes that Leela should have done a duty towards Anupama. She doesn’t want to stay quiet when her daughter’s marriage breaks. She feels unlucky to get a son-in-law like Vanraj. She wants to take Anupama home. She asks Leela to accept that Vanraj has ashamed them.

Anupama refuses to go with her mother. She feels dutiful towards her family. Vanraj leaves from Kavya’s house in rage and meets an accident. Anupama senses that he isn’t okay. Samar gets her intuition confirmed when he gives her the accident news. Vanraj gets critically injured. Will Vanraj die? Keep reading.

Reviewed Rating for this particular episode Anupama Vanraj to die 31st December 2020 Written Update:5/5 This rating is solely based on the opinion of the writer. You may post your own take on the show in the comment section below.