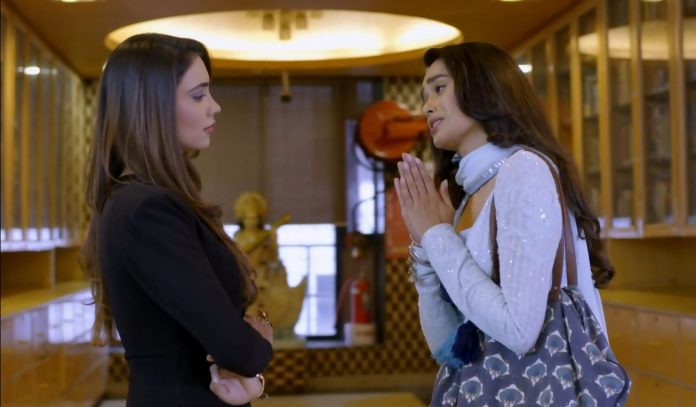 Kumkum Bhagya 1st January 2021 Written Update Rhea Prachi secret deal Aaliya gets surprised to see Purab back. She tells him that she missed him a lot. She asks if he missed her too. Purab tells her that she didn’t change even with time. She tells that Abhi is marrying Meera for Rhea’s sake. She tells him that Pragya chose Prachi over Rhea, Rhea has got Prachi’s accident done, Pragya got Rhea arrested, Prachi and Rhea are at loggerheads now.

She asks him not to make distance between them. He tells them that they have no relation, they will never have any fights like Abhi and Pragya. He tells that Abhi and Pragya’s relation stands a chance. Purab meets Pragya and family. He is glad to meet Prachi. Pragya feels glad to meet him. He tells Pragya that he met Prachi before. Sarita tells that he has two relations with Pragya and Abhi. She welcomes Purab and invites him for dinner. Purab talks to Pragya about Abhi’s marriage. Pragya tells that she is happy with Abhi’s decision to marry Meera.

Purab wants her to end the differences. Meanwhile, Ranbir wants to talk to Pallavi. She asks him why did he risk his life for Prachi. She knows he loved Prachi, but now he has to move on. He tells her that he wants people to differentiate between love and possessiveness. He tells that a small misunderstanding can ruin relations. Pallavi doesn’t understand anything. He wanted her to tell the truth. He feels sorry that Pallavi tries to separate Prachi and him.

He doesn’t want to forget Prachi. He rushes to meet Prachi at her home. He wants to apologize. She asks him to leave, since she knows the entire truth of him. He tells her that Pallavi suffered a heart attack when he was leaving the house. He tells that Pallavi forced him to get engaged to Rhea. He adds that Pallavi is his mum, he isn’t selfish to lose his mum by choosing his love. He tells that Vikram would also not support him if he chose Prachi over Pallavi. He reminds her own words that love isn’t important than mum.

Prachi realizes that he was ignoring her for this matter. Ranbir doesn’t want her to have a heartbreak. He tells that he was behaving such so that she hates him and moves on. He tells that he is really sorry for his odd behavior, he just loves her. He wants her to punish him, but not stop him from loving her. Prachi forgives him on knowing the entire truth. She tells him that she trusts his every word. She asks him about Rhea’s statement.

He tells that he will come soon to take her home with all the due respect. He adds that he loves her and will marry only her. They share a hug. Rhea goes mad that Ranbir never sees her, he is just after Prachi. Aaliya consoles Rhea. She asks Rhea to take a stand for her love. She advises Rhea to do something else she will be losing Rabir forever. Rhea meets Prachi at the college. The sisters get into a fight. Prachi tells that she has got to know the truth from Ranbir. Rhea tells that Ranbir is just of her. She hates Prachi.

Prachi lectures her for having hatred for Pragya. She knows that rhea was trying to hurt Pragya. She knows that Abhi is marrying Meera because of Rhea. She accuses Rhea for separating their parents. Rhea tells that she knows Pragya loves her so she is hurting him. She feels Abhi loves her more, so he agreed to marry Meera. She doesn’t want Pragya back in their family. She wants Abhi to leave Pragya forever. Prachi begs Rhea not to hurt Pragya. She asks Rhea to try to unite Abhi and Pragya. She breaks down. Rhea wants her to keep crying.

Moreover, Prachi angrily slaps Rhea. Rhea asks Prachi if she can sacrifice her love for the sake of Pragya. She tries a deal with Prachi. She plans to get Ranbir from Prachi and promises to unite Abhi and Pragya. Prachi gets into a big fix when Rhea asks her to accept the deal. What will be Prachi’s reply to Rhea’s deal? What do you think Prachi should do now? Should Prachi give up on Ranbir for the sake of Abhigya’s union? Keep reading.

Reviewed Rating for this particular episode Kumkum Bhagya 1st January 2020 Written Update Rhea Prachi secret:2/5 This rating is solely based on the opinion of the writer. You may post your own take on the show in the comment section below.