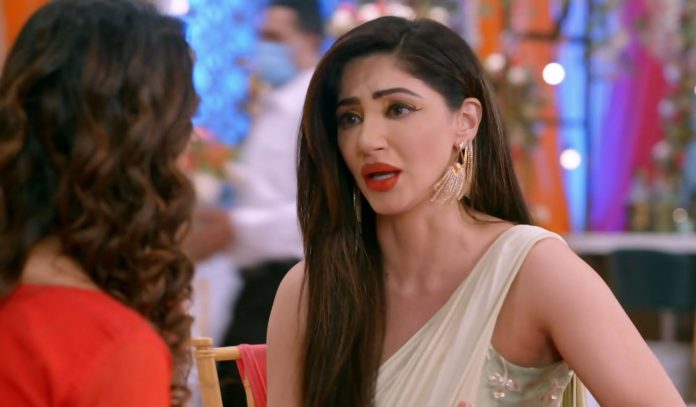 Kumkum Bhagya 4th January 2021 Written Update Aaliya final move Rhea and Prachi meet at the college and get into a quarrel. Rhea asks Prachi if she really cares for Pragya’s happiness, which just lies in Abhi. She questions Prachi if she can sacrifice her love and happiness for the sake of Pragya and Abhi’s union. Rhea tells Prachi that she is rejected by everyone. Prachi begs her not to do wrong with Pragya. She is ready to make any sacrifice for Pragya. Rhea is ready to stop Abhi’s marriage with Meera if Prachi sacrifices her love, relationship and future with Ranbir. She asks Prachi to forget Ranbir and stay away from his life, if she wants to see her parents happy. She wants Prachi to promise her that she will give away her love.

She promises to return Pragya’s love. Prachi gets helpless. She can’t see Pragya crying for Abhi. She knows that Rhea and her differences are the reason for Abhi and Pragya’s separation. Prachi remembers Ranbir’s love that they have to sacrifice their love for their mothers if the circumstances arise. Prachi accepts Rhea’s deal and decides to sacrifice her love for Ranbir.

Prachi tells that Ranbir loves her, she can’t break his heart all of a sudden. She wants some time. Rhea is sure that Ranbir will be heartbroken and come to meet her. Meanwhile, Sarita and Baljeet make a plan to help Abhi and Pragya. Baljeet tells her that Abhi has lost his mind. Sarita tells that Pragya seemed to lost her mind as well. They want to give sense to Abhi and Pragya. They plan Abhi and Pragya’s meeting at the mall.

Baljeet tells that she will send Meera along so that Meera can also see Abhi and Pragya’s true love. Sarita hides her conversation from Pragya. Prachi cries recalling the deal with Rhea. Pragya wants her to confide the matter. She asks Prachi if Rhea or Aaliya had hurt her. Prachi doesn’t want to tell her the truth. She tells that she wanted her family to complete. Pragya tells that Prachi is her family. She wants to be doting towards her daughter. Prachi treasures her. She tells that Pragya is her everything.

She wants to do something for Pragya’s happiness. She knows Abhi and Pragya love each other a lot. She wants their relation to survive. She decides to unite Pragya with her love. She wants to see Pragya smiling at the cost of her own tears. Abhi is upset that he isn’t feeling complete without Pragya. He feels Pragya is making him marry Meera. He knows love is strange. He is helpless to hurt Pragya’s heart. Rhea goes home after ending her meeting with Prachi. Rhea meets Aaliya and tells her that she isn’t insecure about Ranbir.

She wants to rush to Abhi and tell him that he is free from the unwanted marriage now. Aaliya tries hard to stop her. Ranbir reaches Prachi’s house to meet her. Prachi ignores him. She asks Sarita to lie to Ranbir. Ranbir knows that Prachi is trying to avoid him. Sarita wants to know the matter from Prachi. Prachi promises to tell her the matter later. Sarita asks her not to trouble Ranbir, who loves her a lot.

Rhea asks Abhi to reconcile with Pragya. She pretends to be at good terms with Prachi. Abhi is in shock seeing Rhea’s behavior. Abhi is more than happy that Rhea has finally left her obstinate behavior and considered her parents’ happiness. He wants Rhea to be mature-minded and think for others. He feels proud of Rhea, unaware that Rhea had already made a deal with Prachi. Aaliya gets upset that Rhea had double crossed her and ruined her game. She tells that it was always about Abhi and Pragya’s story. She doesn’t think she needs Rhea in her plans now. She tells that she will not support Rhea and her so called love story with Ranbir.

Reviewed Rating for this particular episode Kumkum Bhagya 4th January 2021 Written Update Aaliya final move:1/5 This rating is solely based on the opinion of the writer. You may post your own take on the show in the comment section below.