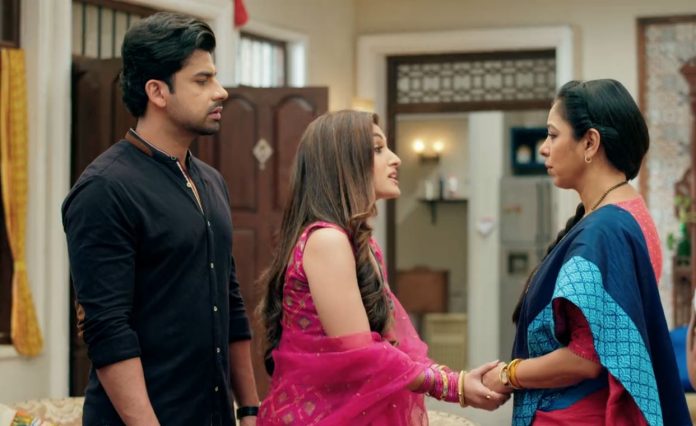 Anupama Written Update 8th January 2021 Kinjal stands for Anupama Hasmukh taunts Vanraj to express his unhappiness about his stay. He tells Vanraj that he isn’t happy. He can’t forget the way Vanraj has hurt Anupama. Vanraj tells that he is really sorry to hurt all of them. He didn’t wish to create a drama at Paritosh’s wedding. He tells Hasmukh that he couldn’t attend the wedding of his son, he is equally regretting. Hasmukh asks him to think of others’ sorrow as well. He tells that he will forgive Vanraj when he regrets from his heart. Samar does a son’s duty towards Vanraj, though he isn’t happy within.

He just wants to share Anupama’s work. He wishes Anupama for her job’s first day. He gifts Anupama a watch. Anupama tells that its the best gift. Samar asks her not to worry for the house. He tells that Nandini can start the dance classes until Anupama joins after her job. Anupama is glad that the entire family is supporting her. She gets a huge surprise when she finds the family sharing her kitchen duties.

Hasmukh tells that she will not work round the clock, they will also share her work like never before. Anupama feels like a dream. Leela is still bitter that Anupama is going to school on the new years’ first day. Hasmukh has all the answers to defend Anupama from Leela’s taunts. Anupama gets ready for her job and faces more taunts from Leela. Vanraj asks Leela to let Anupama go. He doesn’t want Anupama to look after her. He wants Samar to be with him.

He doesn’t burden Anupama with more duties. This surprises Anupama. Vanraj wishes her all the best, but his wishes don’t matter to her now. Kavya learns that he is spending great time with the family. She knows that Anupama is cooking great food and pleasing Vanraj. She doesn’t want Anupama to come between Vanraj and her. She decides to take a step. Anupama buys fruits for Vanraj. Leela and Hasmukh get into an argument because of Anupama.

Leela wants Anupama to look after Vanraj. Anupama returns home. She tells Leela that she had got some fruits. Paritosh and Kinjal return home. They wish the family. They are shocked to see Vanraj’s condition. Vanraj reveals about the accident. Paritosh worries for Vanraj. Leela asks Kinjal to greet Vanraj. Kinjal takes a firm stand for Anupama. She asks Vanraj what is he doing in the house when he is fine and can go his house to live with Kavya. She reminds Leela that its Anupama’s house.

She asks Vanraj why did he come back after creating the mess in her marriage. She can’t believe that the family has forgotten Vanraj and Kavya’s drama so soon. She counts Vanraj’s shameful acts. She tells that Anupama has done every ritual alone, while Vanraj left with Kavya. She doesn’t want Vanraj to be selfish. She tells that Vanraj returned home just to get a good care from the family, he is much selfish.

Anupama tries to calm down Kinjal. Kinjal can’t calm her mind, seeing the injustice happening with Anupama. Everyone sees Vanraj’s pain, while Kinjal sees Anupama’s pain. Kinjal tells that Anupama would remember Vanraj’s cheat and shatter every day. Anupama agrees with Kinjal. Leela rebukes Kinjal. Kinjal apologizes to them. She tells that she can’t stay in the house if Vanraj stays with them. She gives them an ultimatum.

She tells that she has no patience to tolerate Vanraj in the house. Anupama is worried by the big argument between Kinjal and Leela. Kinjal chooses to walk out. She tells that men always dominates the woman who compromises. She doesn’t want to listen to Anupama and forgive Vanraj. She takes a stand for Anupama, by going against Leela.

Reviewed Rating for this particular episode Anupama Written Update 8th January 2021 Kinjal stands for Anupama:3/5 This rating is solely based on the opinion of the writer. You may post your own take on the show in the comment section below.