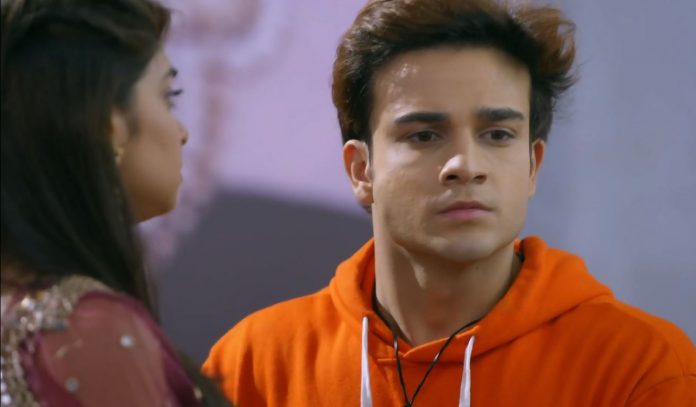 Kumkum Bhagya 13th January 2021 Written Update Ranbir learns truth Rhea runs to meet Abhi. She looks for him to know if he has changed his answer. She doesn’t get to see him anywhere in the house. Pragya hides her tears from Sarita. Sarita knows that Pragya won’t be able to see Abhi and Meera’s marriage. Sarita regrets that she isn’t able to convince Pragya to stop the marriage. Baljeet and Sarita have a talk on the phone. Sarita tells her that she has told Pragya that she will get habitual to accept the truth once Abhi and Meera get married. Baljeet tells that three lives will be ruined this way.

She asks her not to make any mistake and get Pragya in the marriage. She tells that once Pragya comes, Abhi will be influenced to marry Pragya, their ego will go away if they make the love conquer. Prachi and Shahana have a talk about Abhi and Pragya. Abhi misses Pragya. Pragya also misses him. Shahana tells Prachi that Ranbir will know the truth soon. Prachi tells that Ranbir will hate her. Ranbir can’t hate her again. He misses Prachi. He knows she is lying. Prachi cries out her sorrow. He wants to find out the truth from Shahana.

He promises that he will not lose his love. Ranbir calls his friend to make him meet Prachi. He tells that Prachi had lied to him about finding a new rich guy. He wants Prachi to admit the truth. They find Shahana there and hide from her. He explains his plan to his friend. Sarita is fed up of Shahana’s talks. Ranbir takes Shahana aside for a talk. He tells that he is kidnapping her. He introduces his childhood friend Jai.

He makes Shahana sit on the chair and tie her up. She asks Ranbir why is he doing this. Ranbir tells that he wants to know the truth about Prachi’s break up. He tells that he will not let her go anywhere until she tells the truth. Shahana tells that she can’t tell him the reason for the break up. Ranbir asks Shahana to say it for her sake. She tells that Prachi also made her swear to hide the matter.

He tells that she can’t lie to him. She wants her to say the truth while keeping the promise to Prachi. He asks her if Rhea is manipulating Prachi. She admits that Rhea is forcing Prachi for the breakup. He is thankful to her. He frees her before Sarita sees her. Ranbir wants to handle Rhea. He thanks Jai. He wants to confront Rhea and teach her a huge lesson.

She warns Prachi against cheating her. She tells that she will make sure that their parents unite. Abhi just wants to meet Pragya. Aaliya wants Abhi to get ready. Rhea wants to talk to Meera, who is her last hope. She thinks Meera will step back on her saying. Aaliya knows that Rhea will try to meet Meera. She feels its too late now. Baljeet feels sorry seeing Abhi’s sad face. Abhi recalls Pragya. Baljeet knows that Abhi isn’t concerned for his own sorrow. She pins her hopes on Pragya. She calls Sarita to know about Pragya.

Pragya misses Abhi and cries. She hides her tears from Sarita. Sarita asks her to save her marriage, by breaking her silence. She finds Pragya running away from the truth. She tells Prachi that Pragya is compelling her mind to be away from Abhi, whom he dearly loves. Prachi wants to ensure Pragya’s happiness. Abhi wants to call up Pragya. Mitali tells that Pragya may really come and stop the marriage. Aaliya doesn’t want to hear anything wrong. Sarita informs Baljeet that she isn’t able to convince Pragya, who is running away from the truth.

Reviewed Rating for this particular episode Kumkum Bhagya 13th January 2021 Written Update Ranbir learns truth: 4/5 This rating is solely based on the opinion of the writer. You may post your own take on the show in the comment section below.