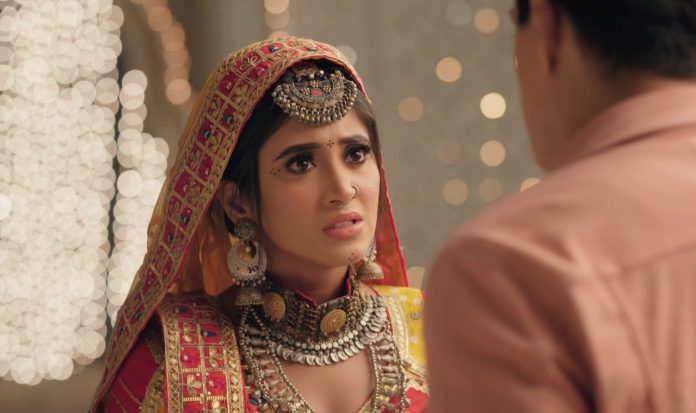 Yeh Rishta Naira finally returns 3rd February 2021 Written Update Kartik finally sees Sirat in front of him. He goes into a state of disbelief. He can’t believe his eyes when he gets to see the shocking sight. He wants to explain his heart that she can’t be Naira. He recalls that he had verified a body in the morgue and also performed the final rites for Naira. He thinks if there is a chance that Naira survived and lost her memory, if that’s the reason that she didn’t return to the family.

His mind starts playing with him. He reasons out all the possibilities. He tells that she can’t be Naira, but her lookalike. His heart doesn’t accept this fact that she is someone else. He decides to find out if Naia is for real. He takes it as a sign from his fate that he met Naira again. He realizes that Kairav had seen her as well and assumed her to be Naira. He goes to talk to Sirat while she looks for her newly bought bracelet. Kartik asks her to take the bracelet back. He is much stunned to see her face, which resembles Naira completely.

He slips back into Naira’s memories. An emotionally low Kartik rushes to hug her, assuming her to be Naira. Sirat gets angry on her bad fate that she is just getting unwanted attention in her life. She tries to get rid of Kartik. She gets helpless to beat him. He is moved when she refuses to know him. She vents out her frustration on Kartik, who is just eyeing her to know her real identity. Sirat reprimands him for the misbehavior and further punches him.

Kartik realizes that she can’t be Naira. She tells him that she is a lioness and can deal with him easily. He misses his lioness Naira. He finds her going away with her friend, complaining about her face. Kartik is broken and shattered. He doesn’t think Sirat can be Naira ever. He finds her completely different from Naira. Sirat wants a call from the boxing coach. She doesn’t want Kartik or Kairav to add more troubles in her life.

Kartik wants to confirm that Sirat is Naira or not. He misses Naira a lot. He sees Sirat everywhere. He wants to get away from the city if Sirat isn’t Naira. He doesn’t want Kairav to run after Sirat, who isn’t his mumma. Kartik handles Kairav and lies to him that he is okay. Kartik leaves for home. He doesn’t think he will meet Sirat ever again, but fate brings them together again. Sirat gets a boxing match opportunity in Udaipur. Kartik will be meeting Sirat again. Do you think Sirat can be the lioness Naira? Leave a comment and keep reading.

Reviewed Rating for Yeh Rishta Naira finally returns 3rd February 2021 Written Update: 3/5 This rating is solely based on the opinion of the writer. You may post your own take on the show in the comment section below.