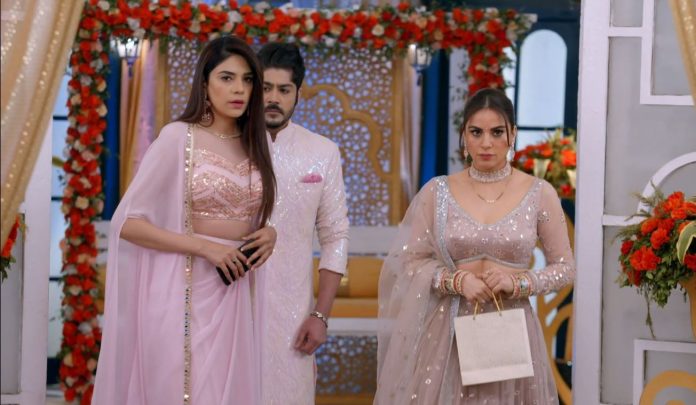 Kundali Bhagya 9th February 2021 Written Update Huge drama Preeta pleads to Kareena that she is just thinking for Kritika’s better future. She tells that she isn’t against Kritika’s happiness, she just wanted Kritika’s life to get saved from marrying a womanizer Akshay. Kareena yells at her that they lost their respect and reputation by constantly blaming Akshay. She tells that they can’t accuse Akshay’s character, no nice person will tolerate a blame on his character. She fears that the marriage will break if Preeta insults Akshay more.

She asks Preeta to leave the house. She tells that she has a right on Karan and can decide about his wife. Preeta refuses to go away from her own house, when Bani also wants her to leave for time being. Karan reaches in time in a filmi way to save his love. He can’t see Kareena throwing out Preeta from the house in a disgusting manner. He consoles Preeta. He tells her that he will handle things. Kareena narrates the entire incident of suspecting Akshay.

She tells Karan that Preeta was breaking the alliance and nearly succeeded too. Karan is angry that so much happened behind his back. Sherlyn asks him to let Preeta go so that the marriage happens well. Sherlyn wants him to think about Kritika’s happiness. Karan learns the entire matter. Rakhi wants to know what he does.

Karan supports Preeta. He wants her to come back home. Preeta asks him if he isn’t angry on her. Karan tells her that he will talk to her. He asks Sherlyn to stop the drama in the family. He tells Kareena that he will get Preeta in the house because she deserves respect, nobody has a right to throw out his wife. He tells that Preeta is his wife, his respect. He doesn’t want to let anyone humiliate his wife. He tells them that Preeta will not leave the house.

Sherlyn gets a slap on her face by Karan’s answer. Rakhi feels proud of Karan. Preeta too likes the way Karan supported her. Karan wipes Preeta’s tears. He cares for her. He tells her that he doesn’t like when she cries. Preeta compliments his goodness. She explains him about Kritika and Akshay. She tells that Akshay is really cheating Kritika. She wants Karan to help her in her aim to stop the marriage. Preeta thanks him when he sweetly talks to her. He tells her that he can fight with her, but he can’t see anyone else taunting her. She asks the reason.

He tells that maybe he has fallen on love. He wants to confess his love on the valentine’s day by making it a special moment. He gifts her a dress for the marriage function. Karan wonders what’s happening to him. Karan shops many gifts for Preeta. He wants to gift her later when her mood is better. He hides the gifts from her. He stops her from seeing the gifts. Kareena is upset to see Sarla attending the marriage function. Akshay is confident that nothing will go wrong. Sarla makes an apology to Akshay’s mum.

She tells that Preeta is sensible and won’t blame anyone for no reason. She asks Akshay’s mum to help him come on the right path. Sarla’s advice irks the latter. Sarla tells that she will support her daughters when Akshay’s truth comes out. Akshay’s mum takes her warning to reply back. Karan and Preeta’s stunning jodi gets blessings from their family. Sarla tells Preeta that Akshay’s parents know his truth, they are also supporting him. Preeta assures that she will stop the marriage and not let Kritika suffer.

Sarla asks if she has a plan to do so. Sarla tells that Karan and her support will encourage Preeta to win in the tough situation. Sameer and Shrishti arrive to support Preeta’s plan. They get the evidences against Akshay. Akshay has no idea what is Preeta upto. He thinks its his big victory, Preeta has lost in front of him. He wants Preeta to tie the gathbandhan. Preeta heads to slap Preeta with the pictures of his shameful affairs. Will Preeta be able to win this time? What do you think? Comment below and keep reading.

Reviewed Rating for Kundali Bhagya 9th February 2021 Written Update Huge drama: 5/5 This rating is solely based on the opinion of the writer. You may post your own take on the show in the comment section below.