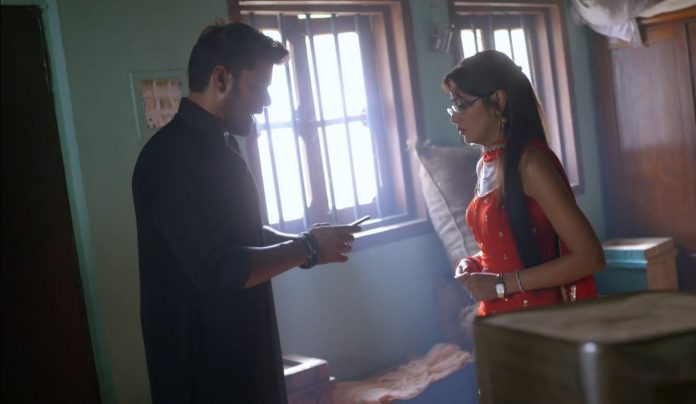 Kumkum Bhagya 11th February 2021 Written Update Escape twist Ashok’s wife Varsha misleads Abhi when he looks for Pragya. She tells him that Pragya went the other side. Abhi goes to look after her. Pandit tells Baljeet and Sarita that they shall pray for Abhi and Pragya’s lives. He tells that both Abhi and Pragya have a huge threat on their life. Baljeet and Sarita worriedly pray for them. Abhi realizes that Pragya is nowhere. He tries to follow his heart instinct.

He rushes to find Pragya. Varsha hides Pragya in the storeroom. Ashok’s mum reaches Abhi and tells him that Pragya is with the guests, she is calling him. Abhi gets tricked again. He senses that something is wrong. He wants to check on them. Ashok’s mum and Varsha lie to him. Abhi asks for Ashok’s number. He wants to speak to Ashok. Varsha locks the room after Abhi leaves. Abhi feels something is fishy, that Pragya is around but not coming in front of him.

Ashok learns that Abhi is restless and might leave the place. He asks his mum to treat the guest well. Bittu and Snake rejoice that they are close to catch Abhi and kill him. Abhi reaches the same storeroom while finding Pragya. Pragya wakes up by his call. She tells him that she is locked inside the storeroom. Abhi finds the door locked. He tries to help her. He recalls Varsha locking the door. He tells Pragya that they are not safe here.

Pragya tells him that Varsha made her faint and locked her. She reveals that Ashok belongs to the family of henchmen. Abhi tells that they will leave soon. He gets attacked by Ashok’s family. Pragya learns that he has been attacked. Varsha tells that Abhi and Pragya can’t escape from their house. The ladies beat him up. He tells them that he doesn’t raise hand on women. Pragya asks him not to request and just fight them. She asks them to better unlock her to fight. She doesn’t want him to get beaten up. She encourages him to fight.

Abhi asks the ladies to stop their violence. He runs away and traps them. He ties them up and gets rid of them. He also enters the storeroom and meets Pragya. He frees Pragya. He tells that they shall romance later and run away first. He realizes that Neha wanted to tell them something. He thinks if Neha can help them. Abhi checks his phone. He tells that Ashok has removed the sim, he can’t call anyone now. He wants to find a solution for the big problem. Pragya tells Abhi that they can run away from the window. He asks why didn’t she run away.

Ashok has the keys. They get caught at gun point by Bittu. Ashok reminds that he got the car keys which fell down. Abhi tries to calm his anger. Ashok tells that he will fulfill his promise by killing Abhi. He asks Abhi not to joke, there is no chance of escaping at this time. Abhi starts the car and runs away. Ashok wonders how did Abhi get the car keys. Bittu follows Abhi. Pragya asks Abhi how did he start the car without the keys. Abhi tells Pragya that he had two keys in the pocket, Ashok got the wrong keys. Pragya praises his smartness.

He adds that everything got set for them, they will drive to home in some hours. Pragya is glad. They finally find some peace. He tells that she has her Kumkum and he has her Bhagya when they are together. They get a loving smile on their faces. Ashok hears a gun shot. He learns that Snake had got angry and shot at her, but Varsha came in between to save her. He realizes that Varsha had died to save his mum. His mum tells him that Snake killed Varsha in rage. Ashok blames Abhi and Pragya to be the reason for angering Snake and getting Varsha killed. He gets more revengeful against Abhi and Pragya. Pragya tells that they will always be together. Bittu follows them madly.

Reviewed Rating for Kumkum Bhagya 11th February 2021 Written Update Escape twist: 2/5 This rating is solely based on the opinion of the writer. You may post your own take on the show in the comment section below.