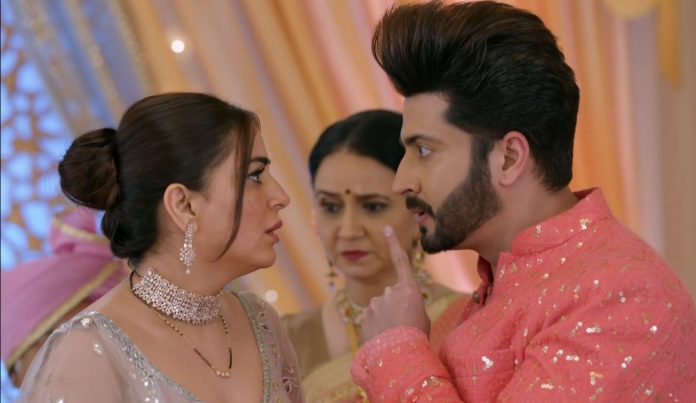 Kundali Bhagya 11th February 2021 Written Update Preeta stuns Karan Shrishti is much upset seeing Preeta in pain. Sarla tells that Karan and his family are happy, even Preeta would be happy without Karan if he doesn’t come to take her with respect. Shrishti feels really strange seeing the bad happenings. She is equally in pain like Preeta. She can’t explain that she loves Preeta a lot. She can’t see Preeta in such trouble. She wants Preeta and Karan’s relation to get stable.

Karan is much hurt that Sarla has blamed him for not trusting his wife. He doesn’t find a reason to believe Preeta. He wanted to answer Sarla and defend himself. He feels Preeta has wronged their relation by taking the decision herself. He wishes that she could have consulted him before taking any big move. Preeta regrets that her efforts to prove Akshay wrong has gone in vain. She tries to get over the incident. Karan wants Preeta’s memories to stop bothering her. He misses her dearly, but can’t express it to anyone.

Sameer knows his pain well. Karan is angered that Sameer also didn’t share anything when he was helping Preeta. He wanted to know their plans against Akshay. He had clearly told Preeta that he will take a step against Akshay if the latter is wrong, but Preeta still didn’t confide. He regrets that Preeta didn’t show faith and confidence on him. Preeta shares her sorrow with Shrishti. She was expecting Karan to stand by her. She tells Shrishti that Karan could have believed her without asking for any reason or evidence.

She feels that their relation has no existence or identity if he doesn’t trust her. Shrishti asks her not to care for anyone else than Karan. She tells that Karan loves Preeta. Preeta doesn’t think so. She doesn’t want to prove her word all the time. She tells that she doesn’t know that Karan loves her or not, he never expressed it. Shrishti is surprised to know this. Karan had planned to confess feelings to Preeta on the valentines. He didn’t know that things would go so wrong.

Preeta tells that Karan didn’t speak anything against her, but didn’t defend her completely. Shrishti tries to make Karan and Preeta patch up. Preeta is much disappointed with Karan. On the other hand, Karan is also disappointed with Preeta. Shrishti calls him up to clear the misunderstanding. She tells Karan that Preeta doesn’t have her clothes in their house. She asks Karan to take Preeta back.

Karan tells Shrishti that he needs a break from Preeta, she has troubled him a lot, he will send Preeta’s clothes home for her. Preeta gets upset on hearing his anger. Karan vents anger on Sameer. Sameer fails to explain anything to Karan. Karan wants answers from Preeta. Preeta calls up Karan to inform him that she will be coming home to collect her belongings. Karan wakes up by her call and thinks if she is coming back to meet him. She remembers his rudeness. She gets angered and doesn’t want to meet him. Karan asks her to take her belongings, which he already kept packed. She asks him not to bother and leave her bag with Girish.

She tells him that she will not face him and collect her bag from Girish itself. She doesn’t want more humiliation. She takes a stand for her self esteem and stuns Karan with her reply. Karan feels sorry. Shrishti had the proof in her mobile, which Akshay had broken in anger. Will she try some way out to find evidences against him again and bring out the truth to prove Preeta innocent? Will she bring Karan and Preeta together? Do you think Karan is losing faith on Preeta so soon and proving his relation weak? Comment your opinion below and keep reading.

Reviewed Rating for Kundali Bhagya 11th February 2021 Written Update Preeta stuns Karan: 2/5 This rating is solely based on the opinion of the writer. You may post your own take on the show in the comment section below.