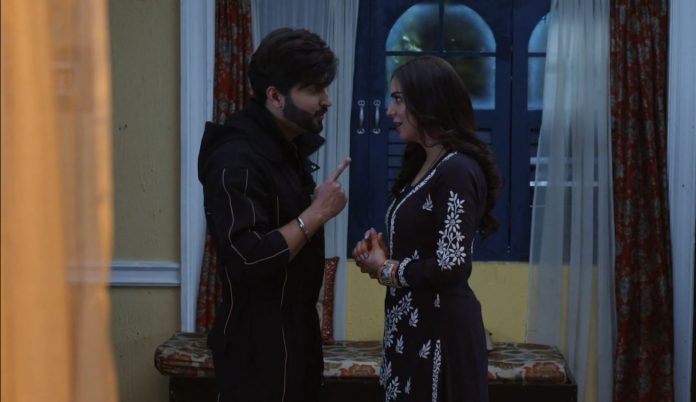 Kundali Bhagya Valentines special Karan Surprise twist Mahira thinks Karan is too angry and won’t go back to Preeta. She gets happy with the thought that very soon Karan will be of her. Karan goes to meet Preeta, who wakes up at night because of Shrishti’s alarm. Preeta realizes that Shrishti isn’t at home. She wants to scold Shrishti when she comes home. Karan arrives at Preeta’s room window. She assumes that he is the dangerous thief doing the rounds in the locality to loot the people. She attacks him in defense. She realizes that its Karan.

Karan stops her from hitting him. Janki is informed about a thief entering Preeti’s room through the window. She panics and runs to alert Sarla. Preeta and Karan finally break out their emotions from their stiffened egoistic hearts. They melt down and get into an embracing hug. Preeti sheds tears. Karan tells her that he is very upset with her. He wanted to fight her. He tells that she did wrong to leave the house and going away from him without talking to him.

He tells that he hates her. She asks him if he came to say that. He tells that he missed her a lot. Janki wakes up Sarla at night. She tells Sarla that a thief barged into the house. Sarla and Janki start looking for the thief. Karan tells Preeta that he wants to scold her for beating him. She tells him that Shrishti would have beaten him more if she was there.

He tells that Shrishti is his big fan, she would have known about his coming. He reveals that he was assumed as a thief and caught by someone, he had to beat the person and escape. He jokes that he had to fight like a hero to reach his heroine. He tells that its valentines day. He asks her to confess her feelings. She tells that she has nothing to confess. He teases her that he would go to Mahira and hear her confession. He tells that Mahira loves her a lot. She stops him from leaving. Sarla learns that the thief has gone to Preeta’s room.

Preeta tells Karan that she wanted to tell him something important. Sarla asks Preeta to open the door. She asks about a thief. Preeta wants to tell about Karan. She doesn’t see Karan. She lies to Sarla and Janki. Sarla realizes that Shrishti isn’t at home. Shrishti is with Sameer. They speak about Karan and Preeta’s rude behavior. She tells him that one has to express feelings. She wonders why doesn’t anyone confess feelings. She tells him that he is better than Karan, he always apologizes even when he isn’t at fault.

Sameer wants to propose Shrishti with love. Their moment breaks when they learn about a thief entering Sarla’s house. Preeta asks Karan why did he hide. He tells that he couldn’t tell Sarla that he came like a thief, to meet Preeta. He adds that Sarla broke their moment. He wants the right moment to speak out their feelings. She tells that the right moment is still there. She tries to tell how she feels for him. She tells him that she didn’t like him initially, but she then she started liking him and finding him a good person.

She tells him that she feels a lot for him. Karan gets pleased to hear it from her. They together want to celebrate the valentines. Sarla knocks the door once again and asks for Shrishti. Preeta hides Karan from them. Shrishti and Sameer come home. They cook up stories to get saved from Sarla. She tells them that Sameer has saved her. Sarla asks Sameer to go home. Shrishti thanks Sameer for his timely lie. Sameer asks Shrishti to unite Karan and Preeta. Shrishti tells that its her duty. She wants some time. Shrishti gets questioned by the neighbors. She lies to them, but her answers match with theirs.

The people enter Preeta’s room on hearing a sound. They look for the thief. Preeta switches off the power to save Karan. The people find Karan there and assume him to be the thief. He gets beaten up only until the moment when he shows up his face. Sarla wants Preeta to answer them. Preeta asks Karan to tell Sarla what he wanted to tell her. Karan expresses his wish to take Preeta home. He promises Sarla once again that he will never let down her expectations. He promises to always safeguard Preeta’s esteem in the Luthra family.

Reviewed Rating for Kundali Bhagya Valentines special Karan Surprise twist: 4/5 This rating is solely based on the opinion of the writer. You may post your own take on the show in the comment section below.