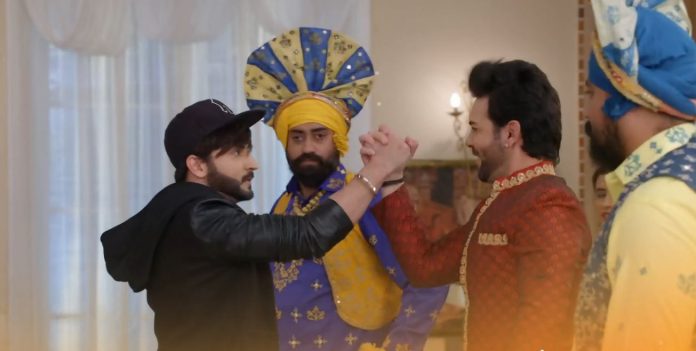 Kundali Bhagya Shocker for Karan Prithvi arrives with Baraat Karan reaches the office for a meeting. He calls Preeta, but gets her number busy. She tells Prithvi that she would have not answered his call if she knew its him. Prithvi believes that she misses him, she loves him. He tells that he is coming to her very soon. Karan tells Sameer that Preeta isn’t answering his calls on valentines day. He asks if Preeta got another lover. He feels jealous. Sameer enjoys his jealousy. He tells that Karan is talking maturely like Rishabh. Sameer tells that its amazing that Karan is so restless without Preeta, he can’t live without her.

Karan wants to express his feelings to Preeta. Sameer asks him to attend the meeting. Preeta gets troubled by Prithvi. She gets his call again. She asks him not to call her. She hates him. He tells her that he left from her life suddenly, so she is angry on him. She asks him to stay away from them. He tells that they will be happy together. He adds that he is coming to meet her, he loves her a lot. He tells that he left his own brother Pawan for her sake. He asks Preeta to accept his love. She knows he is really mad. He tells her that he is coming in half an hour. She tells that she stays with her husband in Luthra house.

He tells her that he will be a good person if he is with her, he loves her a lot and is dying to see her. He threatens to enter the Luthra house with band and marry her. He tells that he will see her soon. Karan speaks of his profession to the clients.

He completes the formality and signs the papers without reading them once. He asks the clients to earn name, fame and money for their company. Sameer knows that Karan is excited to meet Preeta. He wants to meet the targets on time. Shrishti calls up Preeta.

Preeta reveals to her that Prithvi is back, he is troubling her again. Shrishti tells that she will not spare Prithvi. Preeta tells her that Prithvi has threatened to marry her. She isn’t scared of his madness. Shrishti tells that Prithvi is just ruining Karan and Preeta’s valentines. Preeta tells that Prithvi meant everything when he threatened her. Karan meets Preeta at home to know why was she busy on call, is it any new lover. He tells that her number was busy all the time. She doesn’t hide anything from him. She tells him that Prithvi was troubling her on calls. Karan is shocked. Prithvi dares to bring baraat for Preeta. He acts bold in love. Karan and Preeta object to Prithvi’s arrival. Karan runs to bash up Prithvi who has come for Preeta. He asks Prithvi how dare he come in his house. Prithvi stops Karan from hurting him. He speaks out his love for Preeta and challenges to take her away from Karan. What will be Karan’s answer to this? What papers did Karan sign in the office in a hurry? Is it related to Preeta? Will Karan be able to save Preeta from Prithvi’s new evil plans? Comment your view on Prithvi’s return and keep reading.

Reviewed Rating for Kundali Bhagya Shocker for Karan Prithvi arrives with Baraat: 4/5 This rating is solely based on the opinion of the writer. You may post your own take on the show in the comment section below.