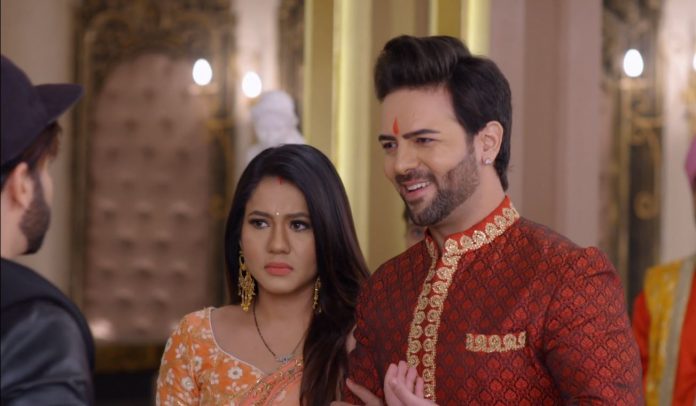 Kundali Bhagya 22nd February 2021 Written Update Prithvi best move Preeta wishes that Shrishti comes to meet her. Shrishti encourages her to be strong. She tells that Karan is also with her to fight Prithvi. She asks Preeta to not get scared of Prithvi. Preeta is encouraged to fight Prithvi. She tells that they are Sarla’s daughters, they will never lose to any enemy. Shrishti asks if Prithvi can really come to Luthra house.

Preeta doesn’t think he can dare to step inside Luthra house. She is affected by Preeta’s threatening. She gets angered when she hears a band music. She takes Karan’s bat to beat up Prithvi. She sees Karan at the door and hugs him. Karan asks her why is she feeling so romantic. He wishes her happy valentine’s day. He asks her why was she going to beat him with the stump. Preeta tells Karan about Prithvi’s calls. Shrishti tells Janki about Prithvi, who is threatening Preeta. She asks Janki not to worry for Preeta, she will go there and help her.

She adds that she is enough to handle him. Janki thinks she is making excuses to meet Sameer. She sees Sameer at the door. She tells Shrishti that her lover is here. Sameer tells Shrishti that he has come to wish happy valentines to Janki. Janki understands that she has spoiled their moment and made them awkward. She lectures them to be bold and brave if they are in love. Karan asks Preeta if she is really saying about Prithvi. He tells her that Prithvi can’t trouble them. He ensures that they will be good together. Preeta is relieved.

They get to hear a baraat band sound and wonder who has come. They go to see him. Janki asks Sameer and Shrishti not to delay things. She teases Sameer by telling him that she is really interested in him. Shrishti asks Sameer to enjoy his new valentine, Janki aunty. Luthras are shocked to see Prithvi coming with the band, baaja and baraat. Preeta is shell shocked to see him fulfill his promise. She worries that he has come to ruin her life.

Sherlyn is also worried to see her love coming as the groom. Karan angrily goes to welcome Prithvi with a punch, but Prithvi stops him. Prithvi asks Karan to stop insulting him and instead respect him by showering rose petals. He tells that he has come for the sake of his love. He reveals that he is the son-in-law of the Luthra house, he is Karan’s brother-in-law, he has married Kritika and he is her legal husband.

Kareena, Sherlyn, Preeta, and Karan are super shocked to see Kritika coming as Prithvi’s bride. They didn’t expect this twist. Prithvi plays the best move of his life by marrying Kritika. He brainwashes Kritika and makes her against Preeta. Kareena gets upset on getting such an evil son-in-law.

Sameer also decides to confess love to Shrishti. Janki teaches Shrishti to speak to Sameer nicely. Shrishti talks to him with love and pleases him. Sameer wishes Shrishti, but gets scared of Sarla. Sameer and Shrishti get help from Janki. Janki tells Sarla that Sameer is proposing Shrishti. Shrishti gets worried on being caught red-handed. Janki tells that Sameer isn’t proposing Shrishti, but just got the flowers for her. Sameer takes a leave.

Prithvi tells Luthras that Kritika is his wife. He wants Luthras to just bless them. The entire Luthra family is shocked. Sherlyn can’t accept this truth. She asks Kritika to tell them that its a joke. Kritika tells them that she has really married Prithvi. She stops Karan from throwing out Prithvi from the house. Sherlyn can’t tolerate Prithvi with anyone else. Do you think Prithvi’s marriage with Kritika is a good twist, since its hurtful for evil Sherlyn? Comment below and keep reading.

Reviewed Rating for Kundali Bhagya 22nd February 2021 Written Update Prithvi best move: 4/5 This rating is solely based on the opinion of the writer. You may post your own take on the show in the comment section below.