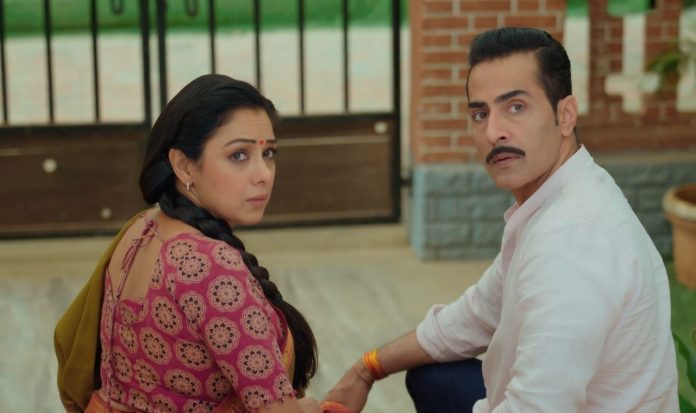 Anupama Vanraj decision for Pakhi 1st March 2021 Update Anupama and Vanraj save Pakhi, when she gets kidnapped by the gang. They realize that Pakhi could have fallen in a dangerous situation. Rakhi reprimands Kavya for her cold behavior towards Pakhi’s matter. She asks Kavya not to behave sick-minded. She really cares for Pakhi. On returning home, Pakhi gets the family’s love. The family is relieved that Pakhi is fine. Vanraj apologizes to Pakhi. He praises Anupama for her instinct, alertness and smartness to find Pakhi. He feels responsible for Pakhi’s state.

Leela is thankful to Rakhi that she helped them with the police. Rakhi gets emotional. Anupama thankfully hugs Rakhi and cries. Rakhi asks Anupama not to blame herself for Pakhi’s mistake. She knows that Kavya doesn’t make any difference in the family. She taunts Kavya. She takes a leave from Shahs after everything gets fine. Pakhi forgives her parents and is ready to forget her insecurities. They ask Pakhi to never leave the house again.

They try to be good parents for Pakhi. Vanraj recollects the tensed situation when they found Pakhi with the kidnappers. He sheds tears in loneliness. He accepts that he isn’t a good father. He tells Anupama that he couldn’t be a good father for his children, he didn’t spend time and connect with them emotionally. He feels guilty that he never understood his children’s needs. He accepts his mistake that he was just insulting Anupama all the time, but she has always been close to the children.

He feels his ego got bigger than his love for his children. He tells that she is a good mother, he used to hate her before, but now he respects her. She asks him to be strong so that their separation doesn’t affect Pakhi. He asks her to keep Pakhi, he can’t handle her alone. He asks Anupama for her support. She tells him that the family will always be common between them. He gets Kavya’s call. He takes the call. She asks him to come home.

He tells that he doesn’t know if he will come to her house. She tells that Pakhi may want him to not divorce Anupama. He tells that Pakhi is really scared at this time. She asks him what will he do if Pakhi wants her parents to unite. She also wants to try emotional blackmailing like Pakhi to make Vanraj realize her worth. She feels Pakhi is a good player and made Vanraj away from her. Later, Vanraj and Anupama hope for a good start. Leela finds them together.

She goes to them and finds them expressing their feelings. She asks them why can’t they be together always. She wants them to stop the divorce drama, else it will affect their children. She begs them to care for the family’s happiness. She warns them that everything will be ruined. She tells that they both aren’t good parents, they should subside their differences and just unite. She tells that she can see them as one unit when its about their children.

She tells that they shall stay under the same roof. Vanraj tells that nothing will change if they stay in the same house. Anupama tells that they can’t keep anyone happy if they are together. Leela doesn’t want to think about Kavya. She just wants her family’s happiness. Hasmukh asks Leela not to force Vanraj and Anupama to stay together, its their decision, they also care for the world.

He tells her that they weren’t happy together, they have a right to stay happy now. He begs her to spare them. Vanraj tells Anupama that Pakhi needs emotional help since she was in trauma. He wants to take Pakhi to a counsellor. He asks Anupama to trust him. She trusts the father in him. She knows his decision for Pakhi will always be right. Pakhi wishes to see her parents together. Vanraj asks Anupama not to take stress for Pakhi’s treatment. Kavya meets Vanraj to know if he will be with his family. He tells her that he has to be with his daughter.

Kavya plays a new game. She permits him to stay with the family, but come to meet her when he misses her. She tries to play her emotional card. He is quite relieved seeing her understanding. Vanraj finds Anupama in trouble. Leela accuses Anupama on knowing that she wants to take Pakhi to a counsellor. Anupama feels hurt. Leela calls Vanraj and Anupama selfish to prove Pakhi mad instead rectifying their mistakes.

She asks Anupama can’t she make a sacrifice and leave her self-esteem. She calls Anupama a bad mother. Anupama doesn’t want to accept such allegation. She breaks down. Vanraj feels sorry for Anupama. They meet the counsellor and take an advice for Pakhi. Samar comes back home on knowing about Pakhi’s state. Vanraj and Anupama get back together to give their love and attention to Pakhi.

Reviewed Rating for Anupama Vanraj decision for Pakhi 1st March 2021 Update: 1/5 This rating is solely based on the opinion of the writer. You may post your own take on the show in the comment section below.