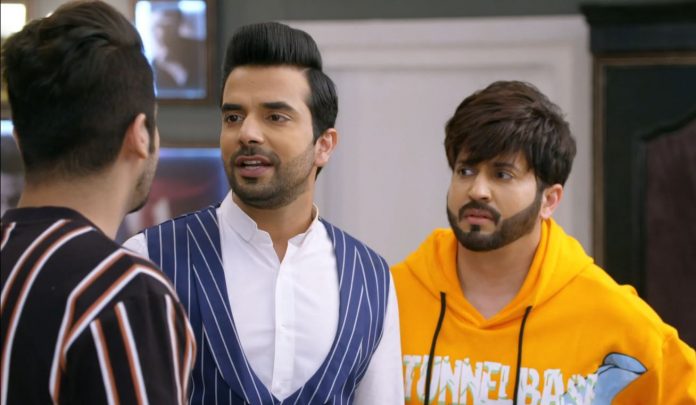 Kundali Bhagya 4th March 2021 Written Update Rishabh in action Preeta finds Sherlyn rushing somewhere. She questions her, but Sherlyn doesn’t say anything. Mahira signs her to leave. Sarla meets Rakhi and relieves her tension. She tells that she can easily handle the family matters. Sherlyn signs Prithvi about Sarla and makes a quick leave. She hides in fear. Prithvi wants to know what’s the mess. Sherlyn tells Prithvi that Mahesh is coming out of comatose. Prithvi asks the reason for her worry. She tells that she has seen a movement in Mahesh’s hand. Prithvi tells that he had seen the same.

He promises to keep Mahesh in the state of coma forever. Mahira asks them not to stand at any corner and fall under suspicion. Prithvi tells that Mahesh has a proof of his past. He doesn’t want anyone to get the proof that will expose his truth. Sherlyn and Mahira ask him about the proof. He tells that its a big secret. He asks Mahira to make the drugs injection ready so that he doesn’t come out of coma. He tells that if his plan goes well, then Luthras will be mourning in the coming week. He promises to show them a dangerous phase.

He aims to break Karan and Preeta’s relation, kill Mahesh and ruin Rishabh’s business. Mahira gets curious to know his plan. He tells that his plan will be executed before Kritika’s marriage. He reveals his plans to them. Shrishti finds the evil trio discussing something. He reveals his plans to his crime partners Sherlyn and Mahira. He makes an excuse to leave when he sights Shrishti. Shrishti knows that something wrong is going to happen.

Rakhi tells Kareena that Sarla will handle the functions on time. Sarla assures that things will be done well. Kareena gets into an argument with Sarla. She doesn’t want Sarla to cast bad sight on her daughter’s happiness. She asks Prithvi to meet Kritika. Prithvi flirts with Preeta when he sees the family away. She tags him a devil. He asks her not to break his heart and stop angering him. She warns him not to test her patience. He knows that its easy to lay a seed of doubt in anyone’s mind. He guarantees to break Karan and Preeta’s relationship.

He rejoices that Rishabh isn’t at home to stop the marriage. Rishabh informs Karan that he has arrived, he is on the way to home. Karan asks him to come as soon as possible. He wants Rishabh to come to his room directly. Rishabh is disturbed that Kritika married Prithvi and stressed the entire family. Kritika wants to take Prithvi’s opinion. Sherlyn’s presence worries Prithvi. He doesn’t want Sherlyn to blast her anger. Kritika asks Prithvi to decide his wedding sherwani. Prithvi tells that he will wear any designs chosen by Kritika.

He acts sweet towards her, growing Sherlyn more insecure. He calms Sherlyn to asking her opinion about the designs. Sherlyn tests his loyalty. He understands that Sherlyn is going to test his love. Sherlyn suggests a different design for him to see what he will wear in the wedding. Kritika disapproves Sherlyn’s choice. She tells that Prithvi will wear the design she chose for him. Prithvi tells that he likes Sherlyn’s design. Sherlyn spares him. Kritika asks Prithvi why did he change his mind. He makes a story that he wants to win hearts of the people who are opposing their marriage. He tells that he will wear whatever she wants.

Kritika has no complains with him. He tells her about the business call and excuses himself. Kritika wants him to work hard and progress in business. Sherlyn can’t see Kritika happy with him. She wants Prithvi to exact revenge on Luthras and then divorce Kritika. Moreover, Rishabh meets his brothers Karan and Sameer. Rishabh tells that they will talk to Kritika and fill some sense in her mind. Prithvi meets all his enemies under the same roof, Sarla, Janki and then Rishabh. He tries to offer apology to Sarla and Janki. Sarla and Janki don’t believe him. Prithvi uses his magical talent to convince people by his sugary talks.

He asks Janki to forget the past and befriend him. Janki warns him. He tells that he had told all his secrets in the past. He wants her to forgive him, it was just Preeta’s love for which he crossed limits. Rishabh, Sameer and Karan try to speak to Kritika to change her mind. Prithvi is shocked to see Rishabh back. Kritika threatens to commit suicide if her brothers dare to stop her marriage. Prithvi is glad that she madly loves him. He reveals his master plan to Sherlyn that he had hired the goons to trouble Kritika, so that she marries him. Rishabh is much worried that Kritika’s future will be ruined.

Reviewed Rating for Kundali Bhagya 4th March 2021 Written Update Rishabh in action: 4/5 This rating is solely based on the opinion of the writer. You may post your own take on the show in the comment section below.