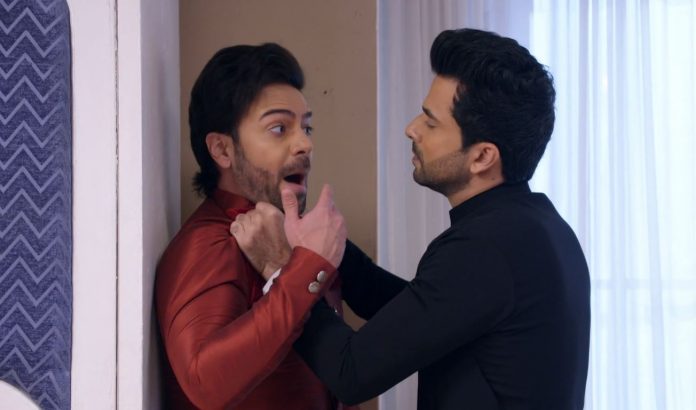 Kundali Bhagya 9th March 2021 Written Update Rishabh anger burst Karan vents out his anger about Kritika’s decision to marry Prithvi. He tells Preeta that he isn’t happy with the marriage. Preeta tells that even she isn’t happy, but Kritika and Prithvi are very happy for their marriage. She suggests that he gets happy for Kritika’s sake. Karan doesn’t want to attend the marriage. Karan angrily goes away. He doesn’t want to be angry on Preeta, since she is innocent in this case. He thinks to apologizes to her.

Preeta gets busy in her work. Karan tries to get romantic with Preeta. Mahira takes Preeta’s place. Karan hugs her assuming her to be Preeta. Mahira pushes him away and pretends that she isn’t at fault. She tells him that she just came to help him when he called out Preeta. She adds that Preeta would blame her on knowing the matter. She wants to clear the matter. Preeta finds them together again. Mahira acts clean.

She tells Preeta that Karan purposely hugged her. Karan tells that he doesn’t want to defend anything. Mahira hugs him in front of Preeta. She tells that its a friendly hug, they aren’t having any affair. She doesn’t want any mistake to ruin their friendship. She apologizes for her behavior. She cunningly fools them. She asks Preeta not to misunderstand her. After Karan leaves, Mahira shows her true colours.

She asks Preeta if she isn’t able to understand anything. She likes Prithvi’s plans. She wants Karan and Preeta to break up. She wants to bring a storm to permanently end their relation. Prithvi flirts with Kritika. He tells her that she deserves a praise. He welcomes the guests to become a part of the Luthra family. Kritika gets love from Prithvi’s mum as well. Prithvi’s mum takes a leave from Luthras. She tells that she has to go for some urgent work. Kareena guarantees that Prithvi will stay with them in Luthra house until his mum returns.

Bani tells her that she will keep Prithvi as her son. A surprise arrives when Bani’s other son Suresh, Mahesh’s younger brother arrives. Suresh tells them that he will also live with them until Mahesh recovers. Kritika tells that she has invited Suresh in her marriage. Suresh adds that Kritika had lied to him about Kareena’s illness and blackmailed him to come. Prithvi greets Suresh and his wife Parminder/Pammi. Prithvi finds a new hurdle in his plan with Suresh’s coming. Karan and Rishabh are very happy to meet Suresh.

Rakhi introduces her bahus Preeta and Sherlyn to them. Mahira advises Prithvi not to stare at Preeta, else Sherlyn may get jealous and take a wrong move. Preeta learns that Shrishti didn’t come in the marriage. She wonders where did Shrishti go. Prithvi behaves nicely with Rishabh to impress him. He tells that he never imagined that their terms will be such good. Rishabh warns him against hurting Kritika. Prithvi asks them to stay cordial like family. Rakhi comes with a good news. She tells them that Mahesh has reacted on meeting Suresh.

She adds that Mahesh is going to come out of coma very soon. The family gets too happy. Prithvi is much shocked. Kritika tells that she had also seen a movement in Mahesh when Prithvi was talking to him. She calls him lucky for Mahesh. Rishabh suspects him and takes him along. He questions Prithvi about his involvement in Mahesh’s accident. Prithvi denies everything. Rishabh beats him with a belt. Rishabh asks him to confess the reason, why did Mahesh react on his name, why did he plan Mahesh’s accident.

Prithvi lies that he loves Kritika, Mahesh also loves Kritika. Rishabh asks him not to run away. Kritika reaches them to know what’s happening. Prithvi tells that they are settling an old score. Rishabh tells Kritika that Prithvi is behind Mahesh’s accident. Kritika believes Prithvi. Rishabh threatens to beat him further. Kritika cries on her husband’s insult. She reminds Rishabh his promise. She apologizes to Prithvi for Rishabh’s behavior.

He tells that he still has an evidence, he will keep the secret safe, none can reach his house to find it. Karan and Preeta get into an argument because of Mahira. Prithvi promises to not let his secret come out. Sherlyn asks him to come in the party. Prithvi wonders who can reach his past, his secret. He realizes that Shrishti is missing in the party. He doesn’t think Shrishti can dare to enter his house.

Shrishti takes a big risk to enter Prithvi’s house. She hides from the guard to get in. Preeta asks Karan if he called her. He denies it. Mahira tells them that she lied to Preeta to make them spend time. She asks Karan to spend time with Preeta. She tells that she knows he is missing Preeta, so she did this. Karan thanks her. He really thinks that Mahira got over their past and now she has moved on. Preeta suspects Mahira. Shrishti looks for some evidence. She gets scared to see someone in Prithvi’s house. She finds the person holding a knife. Later, she sighs relief when the person turns out to be Sameer.

Karan tells Preeta that they shouldn’t worry for Mahira, she has changed and accepted their relation. Preeta asks Karan not to trust Mahira so soon. Karan doesn’t want her to suspect Mahira. Mahira enjoys their fight. She wants to get Karan and change Preeta’s life. She knows that Preeta will be busy in saving Kritika and lose out Karan. Prithvi learns that Shrishti has entered his house to find the secret. Shrishti comes across something against Prithvi. What is the secret at Prithvi’s house? What’s the mystery? Comment below and keep reading.

Reviewed Rating for Kundali Bhagya 9th March 2021 Written Update Rishabh anger burst: 5/5 This rating is solely based on the opinion of the writer. You may post your own take on the show in the comment section below.