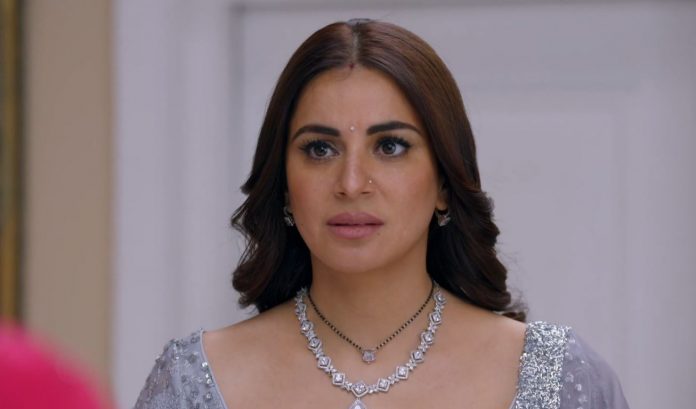 Kundali Bhagya Preeta bashed up 9 March 2021 Full Update Sameer tells Shrishti that he had come to support her. She asks him how did he come from the main door. Sameer tells her how he tricked the guard and got the house keys to unlock the house. She asks him why did he come when he refused before. He tells that he came to help, he can’t leave her alone in trouble. They get into a moment. She tells that they shall check Prithvi’s bedroom for some proof. Mahira attends the guests and pleases Kareena.

She tells Kareena that Preeta isn’t doing her work well. She apologizes to Kareena that she isn’t taking Preeta’s place. Kareena is grateful to Mahira. She looks for Preeta. Kareena finds Preeta passing time with Karan. Preeta wants to attend the guests. Karan wants Preeta with him. Preeta tells that if Kareena sees them, then she will scold them. Karan tells that servants will attend the guests. She doesn’t want to upset Kareena.

Kareena doesn’t want Karan and Preeta to romance and spoil the function. Mahira fills Kareena’s ears against Preeta. She adds that Rakhi will come to defend Preeta. She provokes Kareena against Preeta. Sameer doesn’t know what to find. Shrishti tells that they have to find something to use against Prithvi. Sameer asks her to specify it. Guard suspects that someone entered the house. He goes to check. Shrishti tells Sameer that the guard is coming.

She doesn’t want to leave before she gets any evidence. She gets an idea to fool the guard. She asks Sameer to pretend to be Prithvi in front of the guard. She reveals her plan. Sameer doesn’t understand what she means. Kareena asks for Preeta. She wonders what’s Preeta doing in guest room. She meets Preeta and bashes her up for not fulfilling the tasks. She blames Preeta for dividing the family and ruling over. Rakhi, Suresh and Parminder defend Preeta when Kareena bashes her. Kareena tells that Mahira is fulfilling Preeta’s duties in the party.

Suresh tells that Preeta was making them practice dance. Preeta tells that she isn’t happy with Kritika’s decision, but she is putting efforts to keep her happy. Kareena wants her to do her duties well. Preeta wants Rishabh and Karan to be happy for Kritika’s happiness and give her good memories. Rishabh agrees with Preeta’s advice, while Karan still refuses to accept Prithvi. Shrishti and Sameer reach close to Prithvi’s secrets. Will they find about Prithvi’s past? Comment below and keep reading.

Reviewed Rating for Kundali Bhagya Preeta bashed up 9 March 2021 Full Update: 5/5 This rating is solely based on the opinion of the writer. You may post your own take on the show in the comment section below.