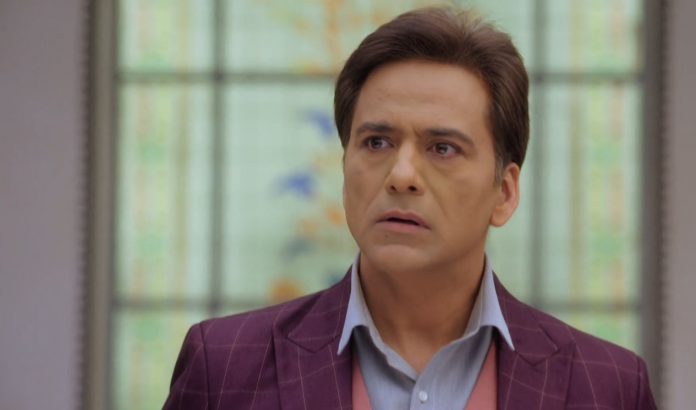 YRKKH Manish ultimate move Kabaddi match turns deadly Sirat is much mad at Kartik for accepting Mukesh’s challenge when he knows nothing about the Kabaddi game. She is worried that she will not only lose, but also see Kartik’s bones breaking up. She tells Kartik that Mukesh is a trainer, he is famous for his skills in sports, they can’t compete with him, he will easily defeat them and then insult them.

She fears that Kartik will get too hurt during the match when he doesn’t know how to defend the moves of the Kabaddi players. She doesn’t think there is any way they can win the match. Kartik tells her that he accepted the challenge just because of her self esteem, he couldn’t see her facing the insult. Sirat tells him that they shall see the worse if they lose the match. She tries to form a team by asking the villagers to join her for practice.

Nobody comes forward to play the match against Mukesh tells his team that Kartik and Sirat won’t find anyone to make a team. He wants his team to just bash up Kartik and break his bones to finish him off, so that he never gets on his feet to support Sirat. Mukesh has no idea that Kartik is a Goenka, a rich businessman from Udaipur. He wants to vent his enmity on Sirat and Kartik. He is glad that Sirat isn’t getting anyone to form a team. Sirat is much tensed. Kartik gets busy on his video meet with Manish and others.

Manish gets frustrated when Maudi comes in between and wastes their precious time. He feels Kartik is really losing it, being at Sirat’s place. He wants Kartik to come back home. Sirat informs Kartik that she couldn’t find anyone to make a team. Sirat tells that they made a big mistake to accept the challenge. An idea clicks Kartik. He realizes that Manish and Akhilesh are kabaddi champions, they can help him win the challenge. He calls Manish to make a request to him to help Sirat. He misses his father’s love and support.

Manish was close to agree to Kartik thinking someone has challenged him. When he learns about Sirat, he refuses. He tells that Sirat has insulted him a lot, he will never help her. Kartik tells that he can’t come back home until he sorts things at Sirat’s place. Manish reprimands him for not caring for the family. He asks Kartik to just keep relations for Sirat. He tells that they will end their ties with him. He asks Kartik to not return home. Kartik senses Manish is too upset. Sirat finds Kartik crying.

She understands his pain that he isn’t able to explain his situation to Manish. She lends some help by encouraging words. She tells him that Manish will soon forgive him. Kartik has faith on Manish that he will surely come to help him out in the crisis. He had already asked Manish to play from Sirat’s team to defeat Mukesh. He hopes that Manish gets the entire family to Jaisalmer and helps them out.

Sirat tells that she is ready to lose, Kartik’s well-being is more important to her than the victory. Kartik doesn’t give up so soon. He begins the kabaddi practice with Sirat. Mukesh plans to make it deadly. He gets unfair by throwing the nails on the soil bed with an intention to injure Kartik. Mukesh wants Kartik to pay a price for coming between their family matter. On the other hand, Goenkas get into a deep discussion about the kabaddi match, Kartik’s call for help and Sirat’s troubles.

Suwarna makes Manish realize that Kartik needs his help. Manish refuses to help Kartik. Akhilesh and Lav-Kush make excuses to reach Kartik and help him in the kabaddi match. Manish will also reach Kartik and Sirat to help them win. The coming track of Kabaddi match is going to be really interesting. Goenkas will show their unity against Mukesh. Keep reading.

Reviewed Rating for YRKKH Manish ultimate move Kabaddi match turns deadly: 5/5 This rating is solely based on the opinion of the writer. You may post your own take on the show in the comment section below.