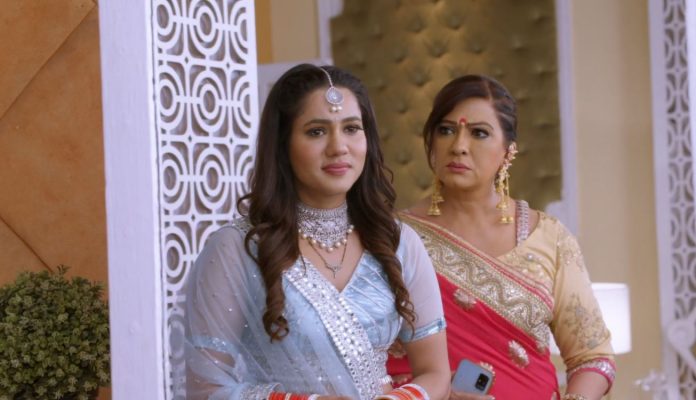 Kundali Bhagya Shocker for Kareena 12th March 2021 Full Update Bani learns that Suresh is looking after Mahesh. She asks Sameer to call Suresh. Sherlyn wants to know why does Prithvi want to meet her. She makes an excuse to go to her room. Prithvi asks his mom to just keep Kritika away from him until he meets Sherlyn. He tells that Kritika won’t marry him if she learns his truth. He takes his mom’s help and keeps Kritika engaged.

He meets Sherlyn in her bedroom. She tells him that her marriage will break if anyone sees them together. He tells her that Shrishti is planning something against him, she wants to expose him, she had warned him clearly. He asks her to find out Shrishti’s plan. Sherlyn is also worried that he may get exposed. Kareena goes to check on Sherlyn. Prithvi tells Sherlyn that he doesn’t know Shrishti’s plan. She tells that Shrishti’s motive is to make him out of Luthra house, she can expose his truth. She scares him further.

He tells that this can’t happen, else his revenge plan will fail. She also wants revenge on Rishabh. He turns raging on Rishabh’s name. She supports him. She hugs him to calm him down when he tells that he can never lose to Rishabh. Kareena finds them in the odd situation. She can’t believe the sight. She questions them about their hug.

Meanwhile, Shrishti shows the evidence to Preeta. Preeta likes the findings. Sameer tells that he also wanted to share the good news with Preeta. Shrishti tells that Prithvi met her and provoked her to blurt the truth. She adds that she had warned Prithvi, maybe he knows that they have some proof against him. Preeta is thankful that they got the right proof. Kareena reprimands Sherlyn and Prithvi on catching them red-handed. She tells that she will tell Kritika and Rishabh their truth. Sherlyn tries to explain Kareena that there is nothing wrong in their relation as it appears.

Kareena tells that Prithvi isn’t a right guy for Kritika. She declares that she will not let the marriage happen, she doesn’t believe the mass wedding done before. She can’t let Prithvi ruin Kritika’s life. Sherlyn wants to explain Kareena, while Prithvi decides to kill Kareena. He feels sorry to take this step. Mahira watches the drama. She tries to convince Kareena by making stories. Prithvi doesn’t want the marriage to get cancelled. Sherlyn stops Prithvi from stabbing Kareena. Mahira tries hard to help her friends.

She tells Kareena that Prithvi was scared and was refusing to marry Kritika because he isn’t comfortable to adjust in the rich family. Prithvi tells the same story that he feels he doesn’t deserve Kritika. Kareena tells that she has no problem, she will break the marriage. He asks her to not doubt him. He apologizes for his mistakes. He promises to keep Kritika happy. Sherlyn thanks Mahira for saving them. Prithvi tells that there is still a threat because of Shrishti. Mahira tells that they will handle Shrishti.

She asks Prithvi to marry Kritika soon and then he can work out his plan. Mahira tells that they are a team and have to be together. Kareena can’t accept Prithvi’s lie. She wants to talk to Kritika about him. She decides to find out his truth. Preeta asks Shrishti did anyone see her at Prithvi’s house. Shrishti tells that they didn’t get caught by the guard. Preeta learns the entire story. She concludes that Prithvi’s guard suspected them and understood the truth that they are spying. She tells that the guard would have told the truth to Prithvi by now.

Shrishti tells that it doesn’t matter now, they will show the evidence to Kareena and prove Prithvi wrong. Sameer tells that Kareena will cancel the marriage, Karan and Rishabh are already against Prithvi, they will bash him up in anger. Kareena meets Kritika and finds her very happy. She asks Kritika why does she like Prithvi. Kritika tells that he has many good qualities. Kareena tells that Prithvi has saved her life, she knows it. Kritika tells that Prithvi respects her and also her wishes, unlike Akshay, who left her in the mandap and didn’t pay her any respect. She tells Kareena that Prithvi had respected her by giving her space on their wedding night, he is understanding and supportive.

She feels he is the one for her, he is the best. She is really happy and in love with him. Kareena knows that its not easy to break the alliance. She wants to be sure before getting Kritika married. She wants to find out his reality. Preeta reaches Kareena with the proof against Prithvi. Kareena realizes that Prithvi is already married, he is cheating them. Will this positive twist really occur? Will Preeta succeed in proving Prithvi a wrong guy and stop the marriage? Comment your views. Keep reading.

Reviewed Rating for Kundali Bhagya Shocker for Kareena 12th March 2021 Full Update: 5/5 This rating is solely based on the opinion of the writer. You may post your own take on the show in the comment section below.