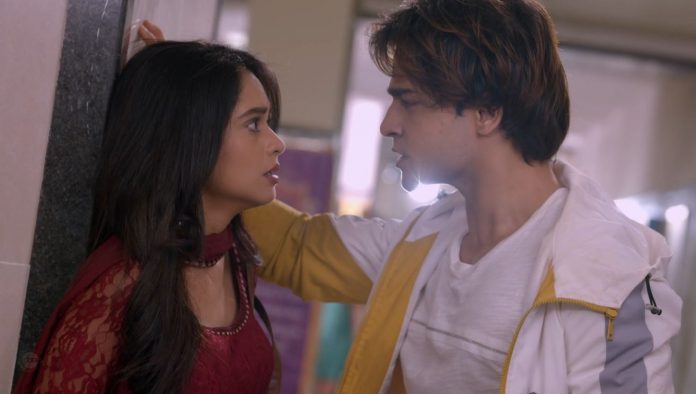 Kumkum Bhagya 18th March 2021 Written Update Violent Ranbir Prachi lies to Ranbir that just Parth has a right on her. Ranbir questions her. He tells her that everyone is watching her cheap MMS. She tells that she has no problem with it, she loves Parth, they are dating now. She breaks Ranbir’s heart. She tells him that she wants to marry Parth. Ranbir turns angry. She asks him to use his senses. She talks arrogantly. She tells him that she is happy with Parth, she is close to him, because she loves him.

She tells that she never loved Ranbir, she was just after his money. Ranbir tells that he knows that she is doing this on Rhea’s saying. He confronts her about Rhea. Prachi doesn’t tell him anything about Rhea. She tells him that she would be grateful to Rhea, after all she is getting rich. He hurts himself when she mentions her love for Parth. Rhea watches them together. Ranbir makes a leave, while Prachi sheds tears. Rhea doesn’t care for Prachi’s tears.

She wants Prachi out of their lives. Prachi asks Rhea why is she falling so low by making her MMS. She knows Rhea well. She feels she is cursed to get a sister like Rhea. Aaliya feels Gayatri has handled Abhi easily, as if she knows him well. Tanu tells her that Gayatri would know handling Abhi by using his fashion craze. She adds that Abhi would be feeling better on wearing his old clothes. Aaliya tells that if there is any logic, then she can wear Gayatri’s dress to be close to Abhi. She wants Abhi to depend on Tanu. Tanu likes the idea.

Moreover, Prachi tells Rhea that she never imagined that Rhea would do this with her. She tells that Rhea is the worst sister. Rhea demands results from Prachi. She asks Prachi to help her marry Ranbir. Meanwhile, Pragya meets Abhi and finds him upset. He tells her that everyone scolds him. She asks him to change his clothes and come. She gets pleased seeing his drawings. Abhi shows his drawings and tells her about Fuggi. Pragya grows emotional when he connects with the past. She asks him to call her Fuggi.

She tells him that he shouldn’t call him Fuggi in front of the family. She asks him to keep it a secret. He agrees to her. Mitali asks Gayatri not to keep the door locked. Pragya worries to answer her. Mitali asks Aaliya to ask Gayatri. Ranbir meets Parth at the hospital. He finds Prachi there. He insults her for her cheat. Prachi doesn’t care. She wants Ranbir to hate her. She asks Parth to file a complaint against Ranbir. Parth tells that they will give a chance to Ranbir and forgive him. Aaliya goes to hit Abhi, but Pragya stops her.

Mitali asks Pragya how dare she do this. Aaliya wants Pragya to answer her. Ranbir threatens to kill Parth if he sees any such MMS again. He hurts Prachi’s feelings by his rudeness. Prachi takes the defamation to help Ranbir move on. Ranbir decides to get engaged to Rhea, who loves her. He doesn’t invite Prachi to insult her. He asks her to come along with Parth if she wants to attend the engagement. Prachi feels upset. Will Ranbir get engaged to Rhea? How is the story going? Comment below. Keep reading.

Reviewed Rating for Kumkum Bhagya 18th March 2021 Written Update Violent Ranbir: 2/5 This rating is solely based on the opinion of the writer. You may post your own take on the show in the comment section below.