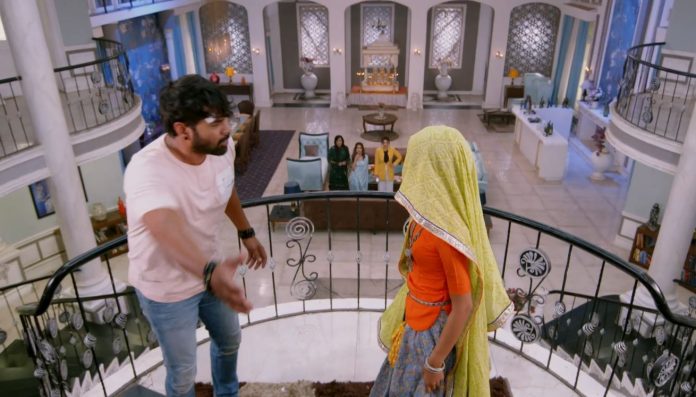 Kumkum Bhagya 22nd March 2021 Full Update Twist of fury Pragya waits outside the house. Mitali and Tanu don’t want to get Abhi’s responsibility. They blame each other for ousting Gayatri. Aaliya tells them that they can find anyone else. She calls the designer home to make arrangements for Ranbir and Rhea’s engagement. The designer tells them that Gayatri is waiting outside for her mum. Tanu wants to prove that she can handle Abhi by taking Gayatri’s disguise.

Shahana consoles Prachi. Prachi tells her about Ranbir’s sorrow. Shahana can’t see the lovers in trouble. Prachi asks Shahana not to tell anyone. She has decided to sacrifice her love for the sake of Pragya and Abhi. Shahana asks the matter. Prachi tells that Pragya has gone to Abhi’s house to take care of him. She feels Abhi’s family is selfish to use Pragya for his care. Tanu wears Gayatri’s clothes to be with Abhi. Mitali gets Abhi there. Tanu tries to prove that Abhi will bond with her. He doesn’t feel the same affection with her. He gets to see Tanu’s face.

He gets angered that she fooled him. Tanu runs to save her life. Aaliya commands Abhi to stop. Abhi gets uncontrollable. She decides to call Gayatri back. Pragya gets lucky to get back to Abhi. Pallavi and Dida want Ranbir to see some designer clothes options for his engagements. Ranbir asks them to select anything they like. He tells that they can decide it, since they decided the girl. Dida asks Ranbir if he is doing the engagement for Pallavi’s happiness.

Ranbir tells that its for his own happiness, he also wants someone, Prachi also has Parth in her life. Tanu is terrified by Abhi’s behavior. Aaliya tells Tanu that she will not tolerate anyone taunting their family because of Abhi. Pragya keeps her conditions to re-join the work. Abhi meets Pragya. He tells her that Tanu did wrong with him. He asks her to scold them. Pragya tells that she wants to see his painting. He calms down.

Aryan asks Ranbir what is he doing. He asks Ranbir about Prachi. Ranbir doesn’t want to answer him. Ranbir is in pain, just the same way as Prachi. Prachi is still crying on their break up. She didn’t know that heartbreak would hurt so much. She misses Ranbir. Ranbir hurts himself by recalling Prachi.

Reviewed Rating for Kumkum Bhagya 22nd March 2021 Full Update Twist of fury: 2/5 This rating is solely based on the opinion of the writer. You may post your own take on the show in the comment section below.