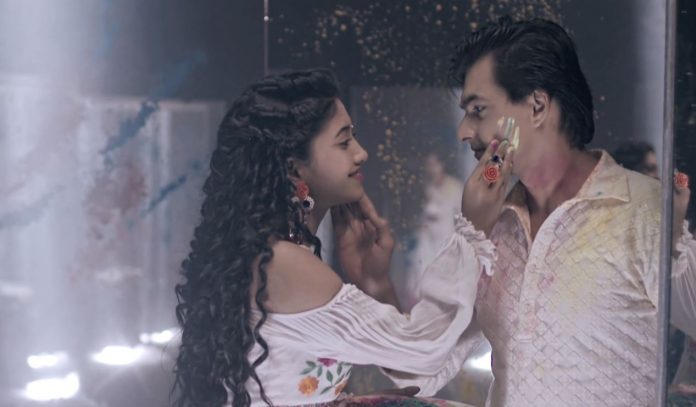 Yeh Rishta Kartik Naira holi twists 25th March 2021 Full Update Kartik has saved Sirat from the molesting coach Dev. He calls the boxing academy to file a complaint against Dev. He is ready to file a written complaint against such people. He apologizes to Sirat for repeating the incident in front of her. Kartik and Sirat try to keep the incident a secret. Manish wants Akhilesh to speak to Kartik about marrying Rhea. Akhilesh tells that its too early for Kartik to move on. He wants the family to give some time to Kartik.

Manish reminds how the family explained him to marry Suwarna. He also adds that Suwarna made her own place, she didn’t take Soumya’s place. Akhilesh agrees to talk to Kartik. Dadi is too worried that Kairav wants Sirat as his mother. Kartik is upset that Naira isn’t with him on the eve of holi. He misses her a lot. Kairav tells Naira that he wants to make Sirat his mumma. Kartik is also amazed by the sign that he should marry Sirat. the sindoor which Kartik applies to Naira’s picture comes over Sirat’s pictures. A twist comes in his holi wish.

Sirat doesn’t go for the practice. Maudi questions her about her decision to quit the practice. Sirat hides her pain. She asks Maudi to play holi with her. Maudi always wants her happiness. Akhilesh finds a chance to speak to Kartik about marrying Rhea. He makes a start to think if Kartik is really ready to move on. Kartik doesn’t understand what he means and agrees to move on. Kartik tells that he will go with the family decision.

Kartik and Sirat meet to celebrate Holi. He encourages her to forget the incident. He tells her that it was not her mistake, Dev was wrong, she should be happy and not take the load. He gives her some convincing tips. Sirat applies the colours to him. She wishes him happy holi. Rhea is upset to see Kartik playing holi with Sirat. She wants to tell Manish to throw out Sirat. Manish happily dances with Kartik. Kartik celebrates holi with Sirat’s family as well. Manish has no objection with Sirat now, since Kartik is ready to marry Rhea. Dadi isn’t convinced of Kartik’s decision yet. Kartik and Sirat have a dance and try to forget the incident.

Reviewed Rating for Yeh Rishta Kartik Naira holi twists 25th March 2021 Full Update: 4/5 This rating is solely based on the opinion of the writer. You may post your own take on the show in the comment section below.