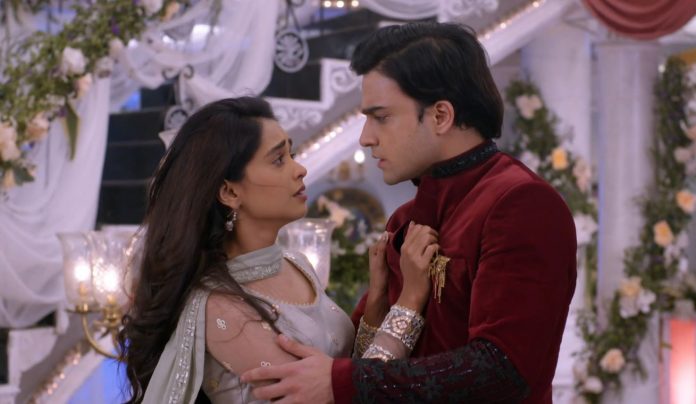 He wants her to know that she has come in his engagement. He hates that she had two options, two back ups to have richness. He tags her gold diggers. He isn’t at fault this time, since Prachi has proved it herself that she is an opportunist. He tells her that she is the last option for her. He asks her if she wants the engagement to break. She doesn’t want the engagement to break. Ranbir demands her an answer to change herself. He is growing mad by her silence. He tells her that she used to have emotional values, she couldn’t cheat him. He angrily takes the ring from her hand.

He hurts her even more. She tells him that she doesn’t love him. She wants him to repeat this in his mind and remember it. Ranbir tells her that he can prove it that she is wrong. She hurts his hand. She shows her love towards him. She tells him that he will be much hurt and in pain. Ranbir tells Prachi that its proved that she loves him. He asks her to never lie to him. He asks her the reason for her denial. Prachi breaks down.

Ranbir wants Prachi to know his love, that’s just for her. Rhea witnesses them together and raises an objection, reminding Prachi about their deal. Ashok wants to kill Abhi and Pragya. She doesn’t want to spare Abhi. Shahana sights Pragya and suspects her seeing the bracelet. She tells Pragya that she is looking for Ranbir. She asks about the bracelet. Pragya lies to her. Shahana hears some women talking ill about Prachi. She teaches them a lesson.

Rhea checks if Prachi had worn the ring. She tells Prachi that she shouldn’t be here. Rhea tells that Prachi is here to just have fun, she is a smart and practical girl. He goes with Rhea, breaking Prachi’s heart. Rhea doesn’t suspect that they have something between them. Prachi cries on her broken engagement with Ranbir. She has lost the ring as well. Abhi speaks to the pandit. He wants to be happy. He learns that the pandit has come to get a couple married, but first engagement. Abhi asks about marriage.

Pandit tells him about the relation of seven births. Pandit doesn’t know that Abhi is kiddish by mind right now. He thinks Abhi has got drunk. He fails to explain about seven births. Abhi tries to know about the life partner. He thinks of Gayatri. He asks pandit about the marriage rituals. Pandit explains him further. He tells that guy and girl takes the seven rounds and make vows. Abhi expresses his wish to marry Gayatri. Pragya is happy that Abhi is getting rid of his fear. She wants to teach him about social bonding. Abhi proposes Pragya. He wants Pandit to get him married to Gayatri. Tanu is shocked to witness this. Abhi takes the rounds with Gayatri.

He reminds Pragya their marriage happened numerous times before. Pragya has good memories of them. Tanu stops Abhi to rebuke him. He threatens to hit her. Tanu lectures Gayatri about her madness to marry Abhi. Rhea tells Ranbir that Prachi got hurt on her ring finger. He tells her that he has no idea about it. He denies that he was with Prachi. Rhea asks him why did he get engage with Prachi. She tells that Abhi told him everything. He asks her why is she believing Abhi.

He answers Rhea and ends the matter. Tanu tells Aaliya about Gayatri, who was just listening to Abhi and marrying him. Pragya tells that she knows her status, she will never marry Abhi. Rhea hates Pragya. She doesn’t want anyone to take Pragya’s name. Rhea tells that Pragya left Abhi at the hospital and never came to meet him, she is disgusting. Aaliya tells that they come into trouble every time. She adds that she hates her mother the most.

Reviewed Rating for Kumkum Bhagya 31st March 2021 Written Update Prachi confesses: 3/5 This rating is solely based on the opinion of the writer. You may post your own take on the show in the comment section below.