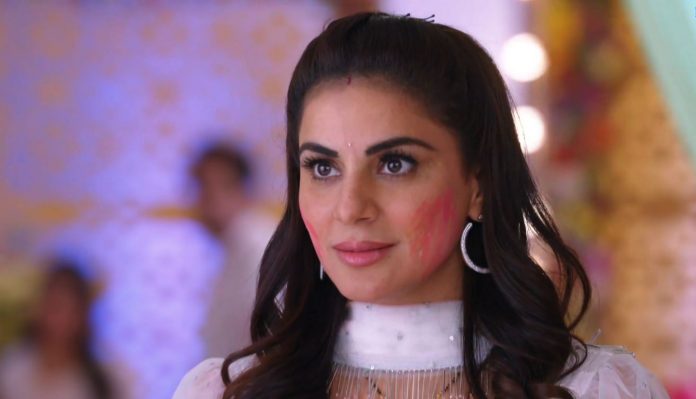 Kundali Bhagya 31st March 2021 Written Update Preeta fools Prithvi Shrishti tells Preeta that Sherlyn spiked Rishabh’s drink to keep her marriage and wooed him, they shall also spike Prithvi’s drink to make him confess his truth. Sameer likes her plan. He applies her holi colours and wishes her. Kritika and Prithvi have a holi moment. Shrishti tells that she will take the drink for bhaang. Preeta tells that Prithvi will never take any drink from them.

Shrishti tells that Prithvi loves her, he will finish the glass if Preeta tells. The guests wish Sherlyn and ask her about the baby bump. Sherlyn tells that she is pregnant. Shrishti takes the drink for Prithvi. Prithvi wishes Preeta with love. Shrishti asks Prithvi to have a drink from her side. He refuses to accept the drink. He tells that he will have the drink served by Preeta. Shrishti asks Preeta to give the bhaang drink to Prithvi. Preeta asks Prithvi to have the bhaang. She keeps a condition that he will call her Bhabhi from now.

Sherlyn fails Preeta’s plan by asking Kritika to have the bhaang. Sameer knows that the bhaang has big dose. Shrishti and Sameer don’t want Kritika to drink that bhaang. They make Kritika drop the bhaang. Prithvi doesn’t care for Kritika, but his costly shoes. Sameer messages Shrishti that he is going after Prithvi. Prithvi lectures Sameer. He asks Sameer to clean his shoes. Kritika reaches them and finds them arguing. Prithvi tells that Sameer is teasing him. Kritika tells Prithvi that she has something special for him. She gifts him the shoes.

Prithvi likes her shoes. Kritika tells that she can’t forget his choice, she had noticed that he likes the shoes. She stops Prithvi and Sameer from arguing. Shrishti gets bhaang pills for Prithvi. She tells Preeta that she got many pills to intoxicate Prithvi. Preeta tells that he will forget his manipulations for some time and admit his truth. Shrishti tells Preeta that Prithvi will never ask for bhaang from now. Preeta mixes the pill in the bhaang glass. She takes the bhaang drink for Prithvi. He tells her that he can even drink by her hands.

Preeta’s plan fails again. She wants to teach a lesson to Prithvi. She wishes his truth comes out in front of Kritika. She attempts to intoxicate Prithvi again. Karan learns about Preeta’s plan. Preeta tells that Karan is with her like always. Karan decides to challenge Prithvi to drink the bhaang. Karan becomes a part of the plan. Karan goes to challenge Prithvi, but the latter refuses. Prithvi learns that Preeta had bet on him. He wants to fulfill the challenge and win for Preeta’s sake. He tells that he isn’t a person to lose. He accepts the challenge. Who will win? Karan or Prithvi? Will Preeta win in her plans? Comment your take and keep reading.

Reviewed Rating for Kundali Bhagya 31st March 2021 Written Update Preeta fools Prithvi: 4/5 This rating is solely based on the opinion of the writer. You may post your own take on the show in the comment section below.