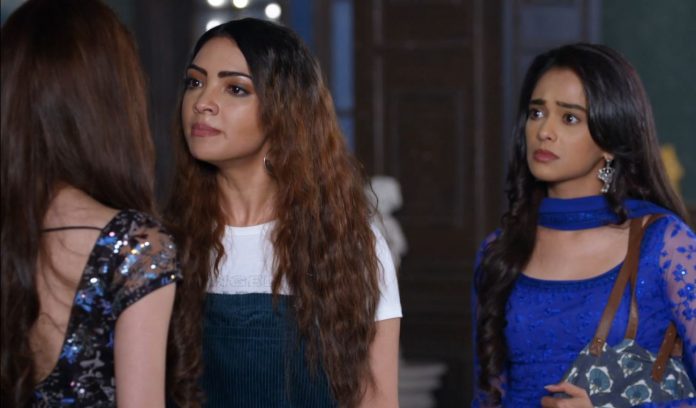 Kumkum Bhagya Prachi Rhea best union 21st April 2021 Aaliya hires a lawyer for Abhi. Rhea asks her how did the police arrest Abhi, how could Tanu do this with Abhi. Aaliya tells her that she couldn’t stop them. Rhea asks her why didn’t she try hard. She knows that the blames are wrong. Aaliya tells that the police has evidences, they arrested Abhi based on it. Rhea asks what concrete proof did they have. She begs Aaliya to just help Abhi.

Pragya meets the Inspector with a plea to meet Abhi. Inspector tells her that she isn’t allowed to meet Abhi at this time. She asks him to mend his rules for her. He tells her that she is requesting him for the sake of her husband, whose crime isn’t proved. He believes that Abhi is the culprit, there are evidences against him, it will be proved when he is taken to the court. She threatens to take help from the social media. She tells about her human rights. She asks why can’t she raise her voice when he has already tagged Abhi a culprit.

He tells her that he can support her seeing a wife’s pain in her eyes. He allows her to meet Abhi. Pragya meets Abhi. They get emotional. He is thankful to her that she has shown faith on him and came to meet. He tells her that he can’t meet eyes with anyone. She asks him to stay confident and strong if he didn’t do anything wrong, the entire family believes him. He apologizes to her. She tells him that she had promised to stand by him and love him when they exchanged the marriage vows. She worries for his wounds.

She gives him relieving moments by taking care of him. He feels lucky to get her in his life. She feels lucky to have him. They have the dinner together, unaware of the coming time. On the other hand, Tanu rejoices her victory. Tanu gets a surprise when Prachi comes to her home. Prachi requests her to withdraw the complaint on Abhi. Tanu asks her about it. She tells that Abhi has done a serious crime. Prachi tells that many lives can get ruined because of Tanu’s serious allegations, maybe Abhi get sick again after the recovery.

She tells that Abhi needs Pragya’s love and care, he can’t live without Pragya. Tanu tells her that Abhi has ruined her life. Prachi tells that Pragya has made many sacrifices for Abhi. She requests Tanu to withdraw the complaint for Abhi and Pragya’s sake. Tanu feels that Prachi is just like Pragya. She asks Prachi if she had made a sacrifice by making Ranbir away. She refuses to fulfill her wish. Pragya tells that Tanu is a liar.

Tanu tells her that she had filed the complaint to get justice. Prachi tells that Pragya will get justice for her dad. She knows that just Pragya is true for the fact that Tanu had evil intentions to separate Pragya and Abhi. She tells that Abhi can’t get any harm until Pragya is with him. She asks Tanu to be ready for getting her lie exposed. Tanu asks Prachi to stop taunting. She doesn’t want Pragya to snatch her fate. She feels nobody can save Abhi. Tanu wants Abhi to accept her conditions. She admits that she has planned everything to get Abhi.

She pushes Prachi to make her out of her house. Rhea comes in time to shoulder Prachi. Rhea and Prachi get together to fight Tanu. The worse situation becomes a boon for the Mehra sisters, who value their unity for the first time. Abhi tells Pragya that people don’t value human lives and pose any blames. He wants to prove himself innocent. He gets courage from Pragya. She is confident that he will get justice.

Abhi gets to hear the taunts from other mates in the cell. He doesn’t care for anyone’s opinion, since the world doesn’t know him. She tells him that she will prove his innocence very soon. He can’t tolerate any taunts on his wife. Abhi knows that people’s taunts will end once the truth comes out. He sends Pragya away. He warns the men against speaking a word against his wife. Tanu apologizes to Rhea for filing the case on Abhi. She tells that she still loves Rhea, their relation will be same. Rhea reprimands her for putting Abhi behind bars.

She knows that Abhi can’t disrespect any woman. She asks Tanu to stop thinking wrong about him, stop lying to frame him. She feels Tanu is the worst woman she has ever seen. Tanu hurts her. She tells that she expected Prachi to come and threaten her like Pragya. She didn’t expect Rhea to fight her. Prachi stops Tanu from hurting Rhea. Tanu raises a hand on Prachi as a reply, but Rhea comes in front to protect her sister. She threatens to slap Tanu. Tanu calls the security to throw the sisters out. Prachi asks Tanu to withdraw the complaint.

Tanu asks her not to become Abhi’s daughter. She wants Prachi to stop pretending. Rhea tells that its their family matter, they want to save their relation. Prachi and Rhea have faith on Abhi. They ask Tanu to take their warning. Pragya meets Mehras to seek the support to save the family from shattering. Ranbir and Rhea come ahead to help Pragya in bringing Abhi home. What do you like the best part of the episode today, Prachi and Rhea’s union? Comment your views and keep reading.

Reviewed Rating for Kumkum Bhagya Prachi Rhea best union 21st April 2021: 5/5 This rating is solely based on the opinion of the writer. You may post your own take on the show in the comment section below.