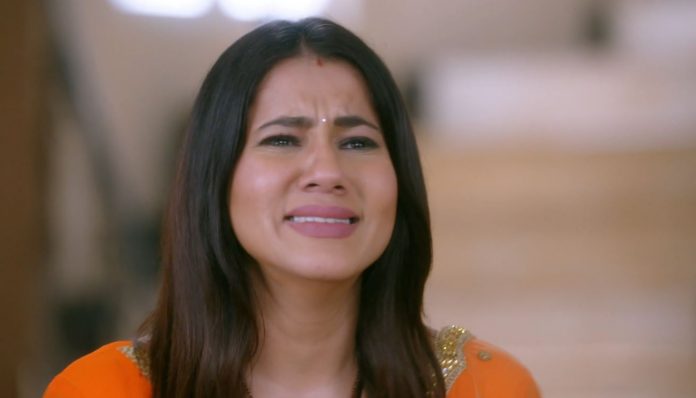 Kundali Bhagya Kritika big revelation 23rd April 2021 Sarla arrives at Luthra house to meet Rakhi. Sherlyn tells her that Rakhi isn’t at home. Sarla doesn’t listen to Sherlyn. Kareena asks Sarla why did she come. Sarla wants to just tell it to Rakhi. She asks Kritika to call Rakhi. Kareena tells that Preeta won’t get their support, she will be jailed. Kritika asks Kareena not to give more tension to Sarla. Sarla asks Kritika not to worry for her and just make her talk to Rakhi. Kareena warns Sarla to stay away from Kritika.

She asks Sherlyn to show the door to Sarla. Sarla knows that Kareena would always humiliate her. Sarla refuses to go. Rakhi comes home and finds Sarla in need of her help. Sarla begs her to help in Preeta’s case. Kareena doesn’t want Rakhi to help Sarla. She gets upset with Kritika as well. She feels Kritika is also involved in the mess. Kareena tells that she can’t believe that Preeta has killed someone. Sarla defends her daughter. Kareena tells that police has evidence against Preeta. Sarla warns Kareena against calling Preeta a murderer.

Kareena calls Preeta a murderer repeatedly and makes Sarla cry. Sarla doesn’t want to argue with her. She asks Rakhi to just help her by hiring a big lawyer to ensure Preeta’s release. Rakhi is ready to help Preeta. Kareena asks Rakhi will she give importance to Preeta than Kritika. She wants Rakhi to protect Kritika first. Kritika begs her to stop fighting. Kareena tells that Kritika loves Rakhi and Preeta, but they don’t love her.

She doesn’t want Preeta to return home until Kritika marries Prithvi. Sarla sheds tears while attempting to clear Preeta’s name. Kritika is left in tears seeing Sarla’s pain. Sarla tells that she will always feel Preeta’s pain and sorrow. She pleads to them to believe Preeta. She feels Luthras don’t worry for Preeta at all. She asks Rakhi how can they punish Preeta when the latter loves the entire family. She breaks down. Rakhi consoles Sarla.

Shrishti is also in the house, keeping an eye on Mahira, but doesn’t hear Sarla’s loud scream. She gets bored seeing Mahira’s make up routine. Mahira gets a call from the blackmailer. She goes to meet him. Sameer and Shrishti wish that Mahira gets killed as well. Prithvi wants to teach a lesson to the blackmailer. He collides with Mahira. They get into a heated argument. Shrishti steals Mahira’s phone. She gets the details.

Rakhi tells Sarla that Preeta is more important to her than Kritika. She answers Sarla. She promises to protect Preeta. She values Preeta’s love and concern for the family. She tells that its her duty to bring Preeta home. She reveals that Karan took her to the lawyer to discuss Preeta’s case. Sarla signs a relief. Kareena asks Rakhi why does she not listen to her. She blames Rakhi for always supporting Preeta. She threatens to leave the house, when Rakhi doesn’t value her. Kareena asks Kritika to come with her.

Rakhi stops Kareena from leaving. She shows her respect for Kareena. Kareena asks her to not support Sarla. Kritika stops Kareena. She defends Preeta who helped her. Sarla tells that Preeta is in jail because of Kritika. Kareena asks her not to involve Kritika in the matter. Kritika admits that its her fault, Preeta is innocent. The family is left in shock by her confession. Meanwhile, Mahesh meets Preeta. She gets concerned for him. Mahesh wants to help Preeta. She feels motivated that he had come to meet her. He remembers their relation.

He tells that he will not let anyone wrong her life. He shows her faith on her. She admits that she had hurt Akshay. He knows that she can never do wrong. Preeta gets emotional. Kritika gains strength by Karan’s arrival. She seeks a chance to make a confession of the incident. She reveals the entire truth of Akshay’s blackmailing move. She tells Karan that Preeta had gone to meet Akshay to give the money when he had called her to meet at the hotel. She adds that Akshay got to see Preeta’s disguise.

She further tells them that Akshay tried to molest Preeta, which made the latter take a step to hit him in defense. The family is super shocked on learning the truth. They feel bad for Preeta, and also angered on evil Akshay’s misdeed. Kritika makes the revelation at the right time. What will Karan do to protect his wife, who had fallen in the mess to protect his sister? What do you think should happen next? Comment your take and keep reading.

Reviewed Rating for Kundali Bhagya Kritika big revelation 23rd April 2021: 5/5 This rating is solely based on the opinion of the writer. You may post your own take on the show in the comment section below.