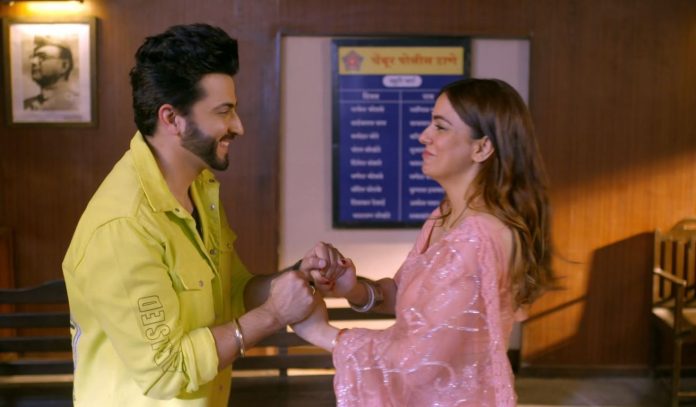 Kundali Bhagya 26th April 2021 Full Update Karan final take Kritika hugs Kareena and sheds tears. She makes an apology to Sarla. She tells that Preeta is in the jail because of her. Kareena feels sorry as well. Kareena also apologizes to Sarla. Rakhi tells Sarla that Karan would have gone to meet Preeta. Sarla tells that she had come to take help for Preeta, everything will get fine soon when Preeta comes home. She is relieved that Karan has gone to meet Preeta and help her. Rakhi finds Parminder watching the drama. She asks Parminder to not tell about Kritika to anyone.

Parminder assures her that she will not reveal anything. She is sure that Preeta will always protect them. She tells that Sherlyn should also become like Preeta. Sherlyn feels that she got under the trouble. She gets blackmailed by Parminder again. Parminder tells that she has taken the necklace herself. She asks Sherlyn to be relieved, she will not tell her evil to anyone. She is jealous of Rakhi, who got a lavish house, good husband, sons and bahus.

She can’t accept everything good happening with others. She feels happy that Sherlyn isn’t a good bahu as Rakhi thinks. Sameer and Shrishti wait for Mahira. They want to know whom is she meeting, who has killed Akshay. Mahira’s car breaks down. Sameer tells that Mahira will take time. Mahira looks for some lift. Prithvi happens to see Mahira in need of help. Sameer and Shrishti don’t see Prithvi there. They make a leave to reach the location. Mahira thinks to take lift from Prithvi. Prithvi doesn’t want to help her, but she counts her favors on him.

Meanwhile, Karan visits Preeta at the police station. He is hurt by the truth. He tells her that she can’t ruin her own life to save the family respect. He rebukes her for not telling him anything about Kritika’s matter. Preeta realizes that Kritika told him everything. She finds his anger justified. She understands that he is angry on her. He asks her to know that he worries for her, he loves her, she means a world to him. He wants her to know his care and concern. Preeta hugs him.

Moreover, Kareena wants to talk to Kritika once. Rakhi and Kareena ask Kritika to open the door. Kritika hugs Kareena. Rakhi tells that Preeta loves Kritika a lot. Kritika knows it well. She tells them that Preeta has proved her love for her. Kareena regrets to misunderstand Preeta always. Preeta tells Karan that she knows his love and care, since he had sent the pillow for her. She tells that she understands his feelings, she feels his love and every emotion. She makes an apology to him. Karan and Preeta get into a moment.

Reviewed Rating for Kundali Bhagya 26th April 2021 Full Update Karan final take3/5 This rating is solely based on the opinion of the writer. You may post your own take on the show in the comment section below.