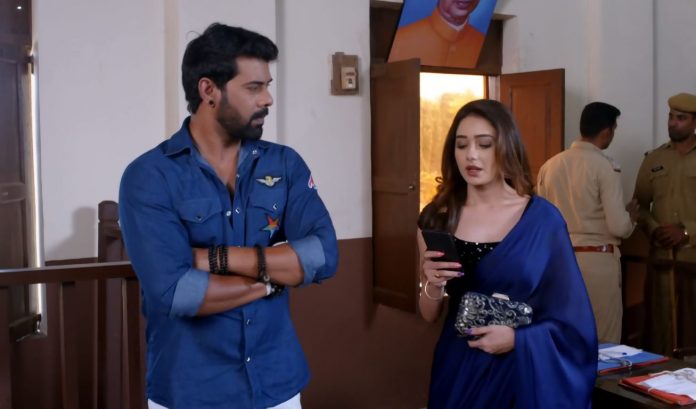 Kumkum Bhagya 4th May 2021 Full Update Tanu stuns Abhi Abhi meets his family and encourages them to be hopeful of his release. Baljeet grows emotional on seeing him after many days. He hugs Baljeet to console her. Pragya hugs him happily. She shares the evidences with Abhi. She tells that she had a recording of Tanu’s confession, she will get him freed from the case. Ranbir hugs Abhi and asks him to come back home soon. Abhi asks him to handle this family’s responsibility until he is back. He hugs Prachi and gives her Pragya’s responsibility.

Prachi promises to never let Pragya fall alone. The family accompanies him to the court for hearing. Aaliya gets provoked by Tanu’s words. Tanu tells Aaliya that Abhi will pay a price soon, her revenge will be fulfilled. Aaliya goes to slap her. Pragya and Mitali stop Aaliya from creating a scene on Tanu’s provocation. Mitali takes Aaliya with her. Tanu clicks Pragya’s picture to taunt her for losing smile forever.

Pragya asks Tanu to think of herself, if she would go to the jail. She adds that she will smile when she proves Abhi innocent and takes him home. Tanu feels that Pragya has lost her mental balance. Pragya replies that she will spoil Tanu’s plans. Abhi gains strength by seeing Pragya and his supportive family. Sarita gets sweets for Abhi. She tells that she has prayed for his freedom. Aaliya tells Pragya that judge has a good record, he may pass the judgement in the first hearing itself, Abhi can come home today itself if everything goes well.

Tanu’s lawyer adds that Raghuvir has run away to save his name from a failing case. Judge tells Pragya that he will start the case against Abhi if her lawyer doesn’t come in time. Pragya pleads to the judge to give a chance to Abhi. Aaliya questions Pragya about Raghuvir. Pragya tells that she is trying to find out. She doesn’t want to doubt him. She doesn’t want to fight in the family to give more strength to Tanu. She hopes that Raghuvir makes them win the case. Aaliya tells that they will lose the case because of Raghuvir’s absence.

Baljeet and Sarita try to help Pragya. Rhea gets a panic attack. Ranbir takes care of her like a good friend. Abhi is glad that Ranbir is with Rhea. Prachi stays with Abhi to give him strength and hope. They know Pragya’s determination. Ranbir is tensed that Raghuvir didn’t turn up. He suspects Tanu’s involvement in Raghuvir’s disappearance. Tanu shocks Pragya by revealing that her contract killer had killed Raghuvir, who had her confession audio to play in the court.

Tanu also reveals her crime to Abhi. She tells him that Pragya had her confession audio, but she had deleted it. She asks Abhi to get ready to face a big trouble, he will be punished for the crime he didn’t commit, he will be separated from Pragya. Abhi and Pragya face an enormous letdown.

Reviewed Rating for Kumkum Bhagya 4th May 2021 Full Update Tanu stuns Abhi2/5 This rating is solely based on the opinion of the writer. You may post your own take on the show in the comment section below.